From Van Morrison to the Decemberists, it won't take long to learn these simple folk songs.

No matter the era, folk music is an important part of tradition, often passing down historical lore and lessons through the ages.

Classic standards like "Amazing Grace" have been around forever, while modern artists like the Decemberists and Bon Iver have offered their takes on the genre.

If you're just beginning your guitar journey, folk is a great way to get to know your instrument, as many songs feature simple transitions and a minimal number of chords.

As such, here is a list of 10 easy folk songs that you can learn with the help of Fender Play's top-notch instructors:

"Waiting in Vain" was written by the great Bob Marley and featured on his timeless 1977 album, Exodus, reaching No. 27 on the UK Singles Chart. In this lesson from Fender Play instructor Barrett Wilson, you'll take two simple one-finger chords to find the reggae pioneer's strong rhythm.

Learn how to play "Waiting in Vain" here.

If you've watched a singing competition show over the past few years, there's a good chance that you've heard a contestant tackle Bon Iver's "Skinny Love." The beautiful ditty brings old school sounds to a new school audience, and it's easy to play while practicing 8th note strumming and switching between A minor, C, D minor and G/B. 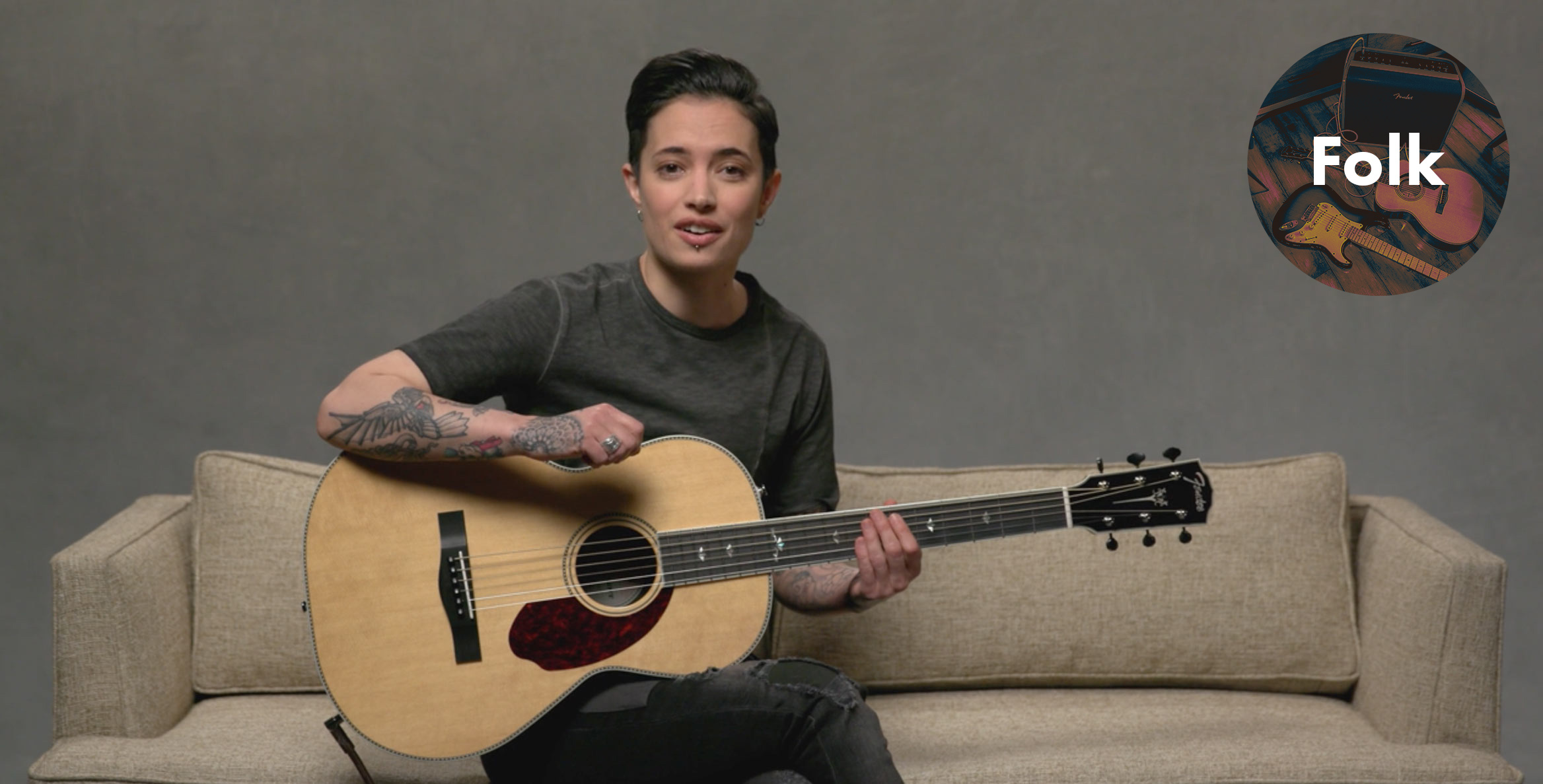 Fender Play instructor Jen Trani leads you through Jewel's 1996 hit "You Were Meant for Me," which reached No. 2 on the Billboard Hot 100 chart. It's an excellent way to work on harmonics while adding folk sensibilities to a pop tune.

Learn how to play "You Were Meant for Me" here.

4. The Decemberists: "Down by the Water"

Coming off the Decemberists' 2011 album, The King is Dead, "Down by the Water" actually featured R.E.M.'s Peter Buck, who contributed his 12-string guitar stylings. This lesson breaks the song down to four basic open chords to hone your ¼ note strum technique.

Learn how to play "Down by the Water" here.

Who hasn't danced along to Van Morrison's "Brown Eyed Girl?" The swinging smash reached No. 10 on the Billboard Hot 100 in 1967 and is considered the Irish troubadour's signature song. Adding it to your repertoire, with the chords G, C, D and E minor, you'll refine your 8th note strumming and open chord transitions.

The Cactus Blossoms might be a modern band, but they've got an old-school, rockabilly vibe, as demonstrated by the jangly "Stoplight Kisses." Its upbeat mood will get any party moving, and you can play it with only four chords (E, A, B7 and E7). 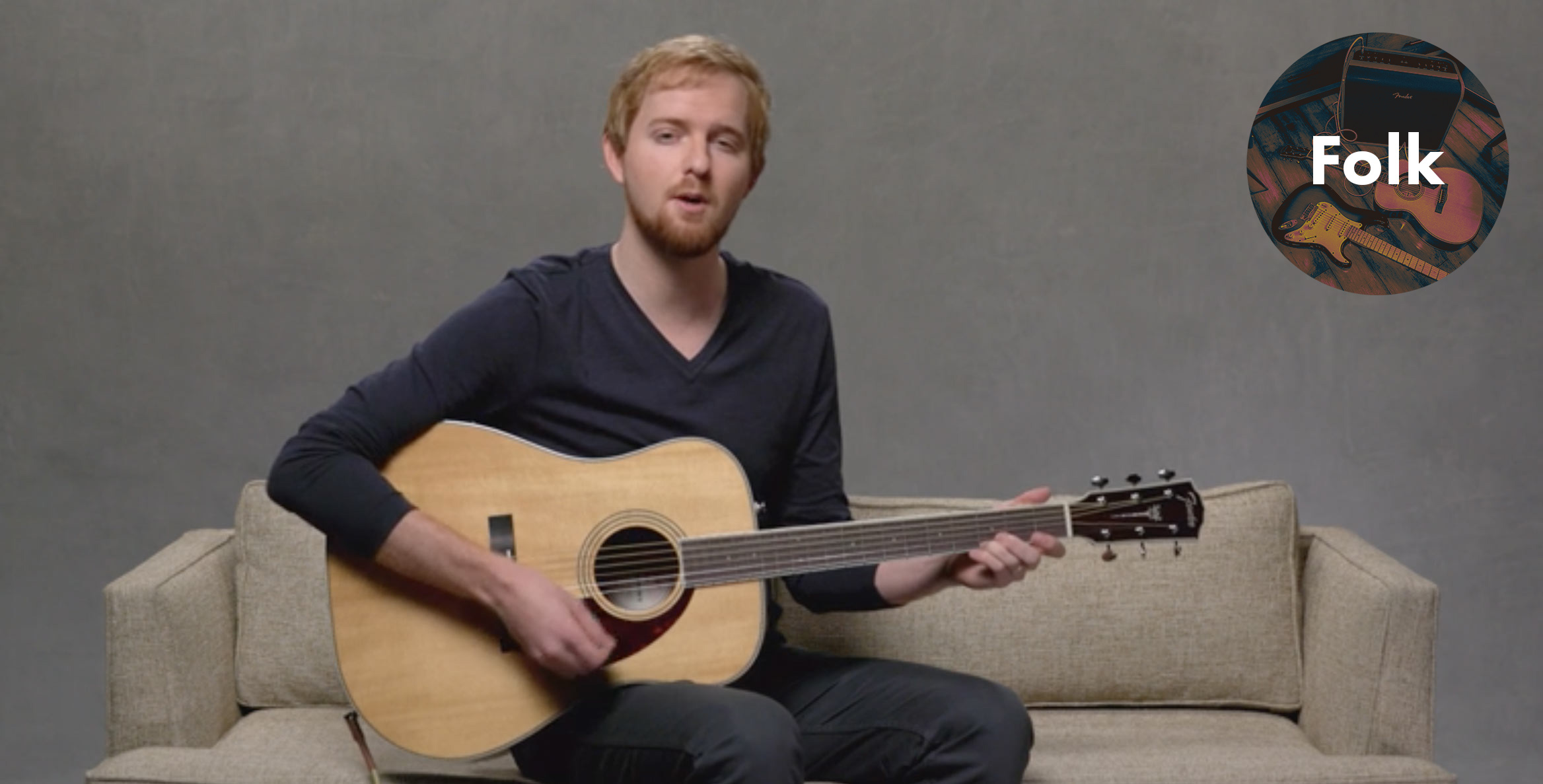 Paolo Nutini's "Candy" was a worldwide hit in 2009, boasting a neo-soul feel that was fresh at the time. This lesson from Fender Play instructor Scott Goldbaum gives it a folky spin, unlocking the Sunny Side Up single with alternate and syncopated strumming.

Learn how to play "Candy" here.

8. Traditional: "Will the Circle Be Unbroken"

Originally written in 1907, "Will the Circle Be Unbroken" is a popular Christian hymn that the Carter Family made it a folk staple in the 1930s. The three chords (G, C and D) make it a snap to learn, and you'll improve your quick-change chord skills while doing so.

Learn how to play "Will the Circle Be Unbroken" here

"Amazing Grace" is more than 200 years old, but it still tugs at the heartstrings each time it's played. This simplified version focuses on finger picking in 3/4 time with the chords A, A7, D and E7.

The legendary trio Peter, Paul and Mary practically invented their own style of harmonious vocals within the folk music landscape, and the top-10 hit "If I Had a Hammer" is a prime example of their powers. Using syncopated strumming, you'll hammer the rhythm into place with a steady groove.

Learn how to play "If I Had a Hammer" here

If you want to dive into hundreds more songs and skills, click here to get a free trial of Fender Play.