From Bon Iver to John Legend, pick up your acoustic guitar and take these songs for a spin with Fender Play.

There are a lot of questions for a beginning guitar player, and one of the biggest is whether you should start on the acoustic or electric guitar.

The answer is simple – do whatever you want. There are benefits to playing both. On the acoustic side of things, they might have heavier strings than electrics, but they can often be less costly and don’t require additional equipment.

If you’ve decided to take the plunge on an acoustic model, you’ll undoubtedly want to learn how to play a song or two (or hundreds!).

So for those that want to dive into a tune, here is a list of 10 easy songs any new player can pick up that sound great on an acoustic guitar from Fender Play.

New “Queen of Country” Carrie Underwood had a hit on her hands with “Blown Away,” her 13th Billboard Hot 100-topping single. The track uses three popular open-position chords, and it’s perfect for an acoustic. In this video, Fender Play instructor Jen Trani breaks it all down, including the basic chord change. 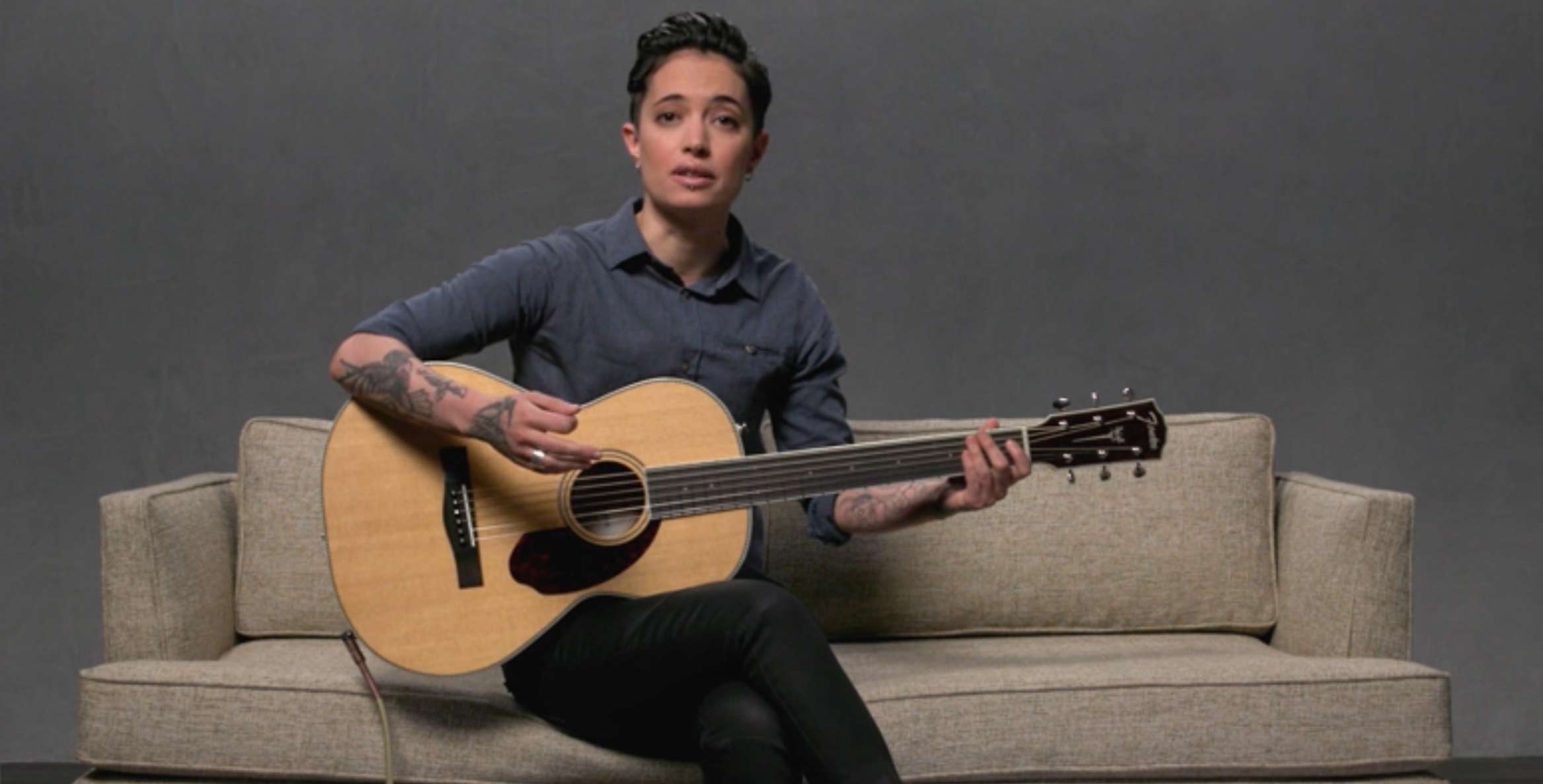 Four chords are all it takes to dive into “Holocene,” a hit from Bon Iver that was named one of the best songs of 2011 by many music publications. This video shows Fender Play instructor Barrett Wilson leading you through those chords, where the use of pivot fingers can help with the delicate and fun-to-play arpeggios.

Learn how to play “Holocene” here.

John Legend: “All of Me”

John Legend’s piano-driven “All of Me” also sounds great on the guitar, as you’ll see in this explanation from Fender Play instructor Nikki Stevens. The beautiful open chords during the intro and verse consist of just E minor, C, G, and D, with A minor coming in during the pre-chorus and chorus.

This acoustic ballad by Green Day was a departure from the punk rock sound of the band's previous releases. You've surely heard it through widespread use in television and movies, in addition to graduation ceremonies and proms.

Learn how to play “Good Riddance (Time of Your Life)” here.

"Country Boy" is a country song composed by Staind lead vocalist Aaron Lewis. It was released in 2010 and was used as the walkout song for UFC featherweight contender Chad Mendes. In this lesson, you'll explore some atypical chord progressions with a basic strumming pattern. 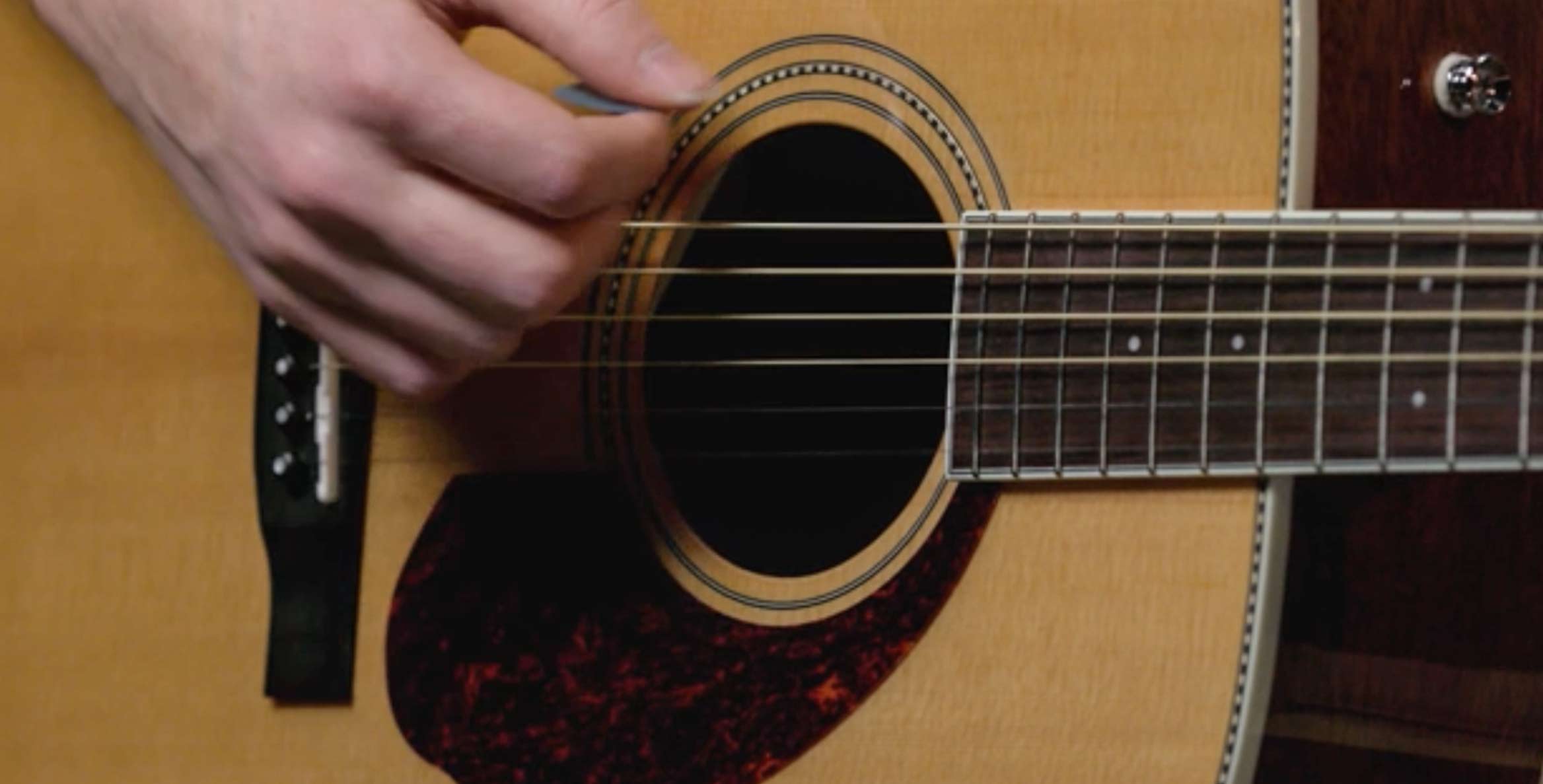 Traditional: “Down by the Riverside”

There is a lot of the G chord in this three-chord traditional song. Kirk Franklin revamped the classic and gave the new current generation a taste of old school gospel-soul songwriting and structure, employing down strumming, chord transitions and single note down picking.

Learn how to play “Down by the Riverside” here.

Traditional: “Pay Me My Money Down”

“Pay Me My Money Down” is an old-timey classic that has been played by many artists around the world, including Bruce Springsteen, who included it on his 2006 folk album, We Shall Overcome: The Seeger Sessions. It should be a breeze to learn, too, with two simple one-finger chords that will help you progress with basic rhythm patterns.

Learn how to play “Pay Me My Money Down” here.

“The Middle” was a breakthrough for emo-rockers Jimmy Eat World, who saw it reach the top five on Bilboard’s Hot 100 chart. On the acoustic guitar, it’s a good entry into pop rhythm guitar playing and chord movement.

Learn how to play “The Middle” here

The Zombies: “Time of the Season”

Many say the Zombies’ haunting “Time of the Season” marked the end of the peace and love movement of the hippy generation in 1968. Either way, the moody guitar is courtesy of Rod Argent, who later went on to form hard rock band Argent. It’s got a laid-back chord progression using mostly E minor and a few others.