How to Use the Stratocaster Pickup Selector Switch

Take a closer look at how this key Strat feature makes it such a versatile guitar.

If you’re new to the Stratocaster guitar, you’re bound to wonder about the workings of its pickup selector switch.

It’s a five-position blade-type switch mounted diagonally on the lower half of the pickguard on the treble-strings side, just forward of the control knobs. Its placement there is, like that of all Stratocaster parts, entirely deliberate—close enough to the strumming/picking hand to be within easy reach while playing, but far enough out of the way that it’s unlikely to be accidentally knocked out of position. 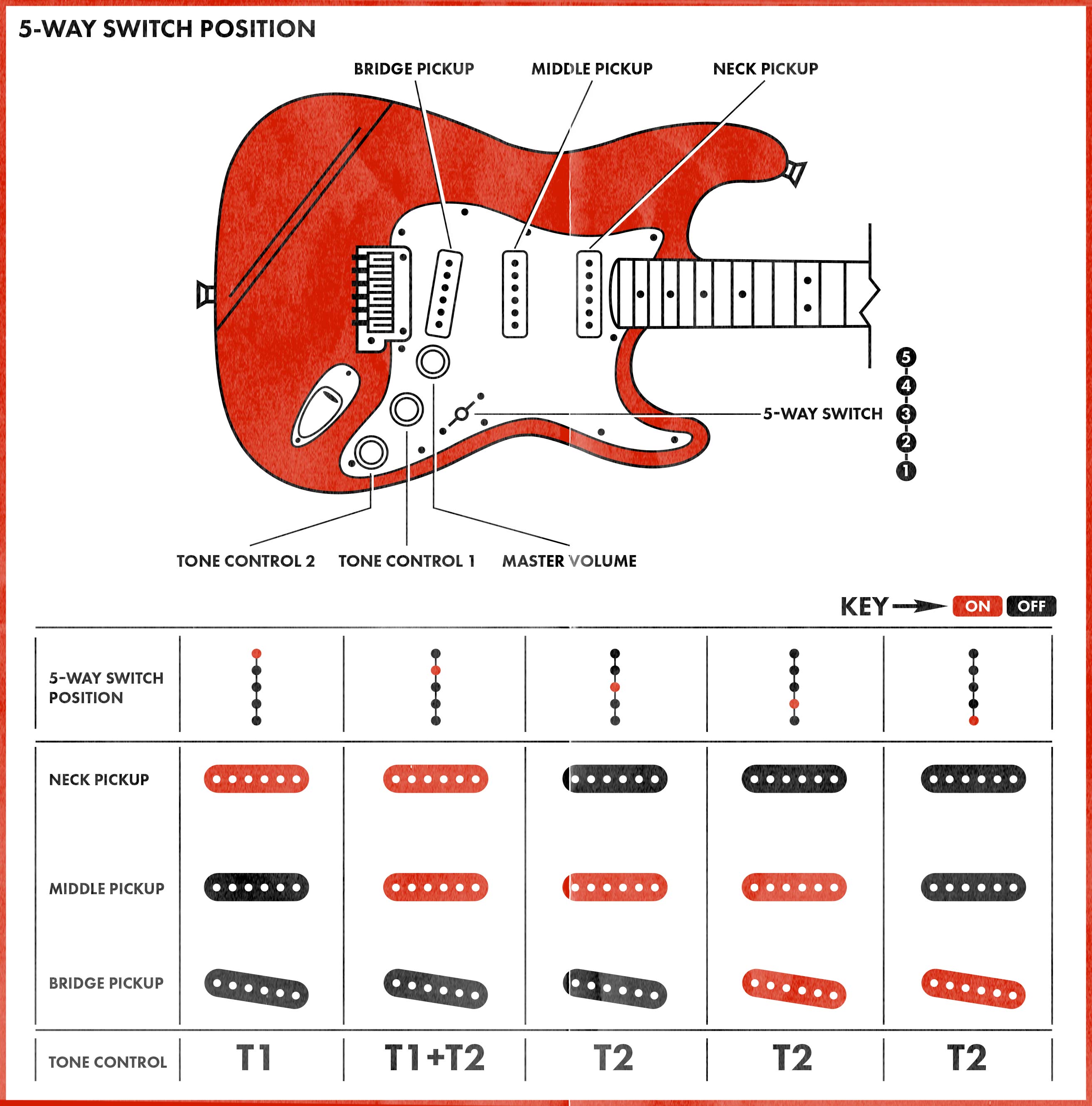 If we number the switch positions 1 through 5, with position 1 being closest to the middle tone knob and positions 2, 3, 4 and 5 proceeding in order toward the middle pickup, we can easily label the switch’s pickup-selection functions (see Fig. 2):

Note that there is no means of having all three pickups on at once. Also note that there’s some quite interesting history behind the Strat’s pickup switch.

For the first 23 years of the Stratocaster’s existence, from its 1954 debut until 1977, the pickup selector was a three-position switch. You could turn on the bridge pickup, the middle pickup or the neck pickup, but no combinations thereof. “Leo (Fender) liked the pure sound of individual pickups,” wrote Richard Smith in Fender: The Sound Heard ’Round the World, of the guitar’s inventor. You could activate only one pickup at a time, and that was that.

Except that that wasn’t that. Guitarists were quick to notice and make good sonic use of an inadvertent peculiarity about the Stratocaster’s control switch. They found that by somewhat precariously lodging the switch in one of the two “in-between” spots—between the bridge and middle pickup positions or between the middle and neck pickup positions—they could get two different dual-pickup combinations. They learned that turning on the bridge and middle pickups together produced a rich and distinctive sound of its own; same with turning on the middle and neck pickups together.

As author Tom Wheeler noted in The Stratocaster Chronicles: Celebrating 50 Years of the Fender Strat, “Players had other ideas. They discovered that balancing the pickup selector in between the notched positions provided additional sounds, typically described as thin, delicate, honky, quacky, hollow, and especially funky.”

Or, as Smith put it his book, using the switch to mix the sound of two Strat pickups produced “snarling nasal tones that literally redefined electric guitar sound. The tones were reminiscent of a muted trumpet or trombone, but with the snap and sting of downed power lines.”

For some unknown reason, guitarists took to referring to the Stratocaster’s in-between pickup switch settings as “out of phase", even though the phrase is technically incorrect, since combining two pickups in a manner that is truly out of phase electrically would produce a sound noticeably weaker and tinnier than either pickup on its own. “Contrary to a widespread assumption about the in-between positions,” Wheeler wrote in The Stratocaster Chronicles, “the pickups remain electrically in phase.”

The in-between positions sound different, as Wheeler pointed out, because pickups in different positions respond differently to string vibrations, cancelling out certain frequencies when operating simultaneously. Of this unintended “chaos of overtones,” Smith notes that, “Leo never intended the Stratocaster to produce its most popular tones.”

Players figured it out almost immediately. Guitarist Buddy Merril, an early champion of the Stratocaster who played with the Lawrence Welk orchestra, used the “in-between sound” as early as 1955. Dick Dale, Buddy Guy and Otis Rush were early proponents of it, too. Many other great guitarists subsequently used the in-between sounds extensively, including Ike Turner, Rory Gallagher, Eric Clapton (“Bell Bottom Blues” and “Lay Down Sally” are good examples), Robert Cray, Mark Knopfler (a middle/bridge sound fan, as heard on “Sultans of Swing”), Nils Lofgren and others.

Just as interesting is the fact that Fender, well aware of the widespread regard for the in-between switch settings almost from the start, let 14 years elapse before officially acknowledging them. The 1968 Fender catalog noted that guitarists could “Select any of three positions or even between the natural positions for sound aplenty.” Finally, in 1977—23 years after the instrument was introduced—Fender replaced the Stratocaster’s three-way pickup selector switch with a five-way switch; a modification that remains to this day as a standard feature.