Learn how to build the major scale on guitar with access to free scale lessons, and get an intro to learning scale patterns across the fretboard.

Learn the Major Scale on Guitar

A scale is a sequence of notes in ascending or descending order. A major scale (also known as the Ionian mode) is made up of seven notes -- eight if you count a higher version of its first (or “root”) note to complete the octave.

The major scale is at the heart of most popular music. Not only can you use the major scale to learn to play some of your favorite songs, but once you master it, you can use it to improvise guitar solos or write your own songs.

All major scales use the same scale formula and intervals. Once you learn the major scale pattern, you can apply it to any major scale, regardless of its root note. Ready to learn more? Let’s get started!

In order to learn how to build a major scale in any key, you need to learn about the intervals between each of the notes on the scale. Intervals are another name for the difference in pitch between two adjacent notes.

Even though there are seven notes in any given scale, each note is not always a full step higher than the one before it. Some rules apply in terms of notes on the scale. Most notes have a full sonic step in between them. However, there are a few that have a half-step between them.

In order to play a major scale, you start on the 1st (or root) note of a scale, then ascend by a:

Let’s use the C major scale as an example since it has no sharps or flats: 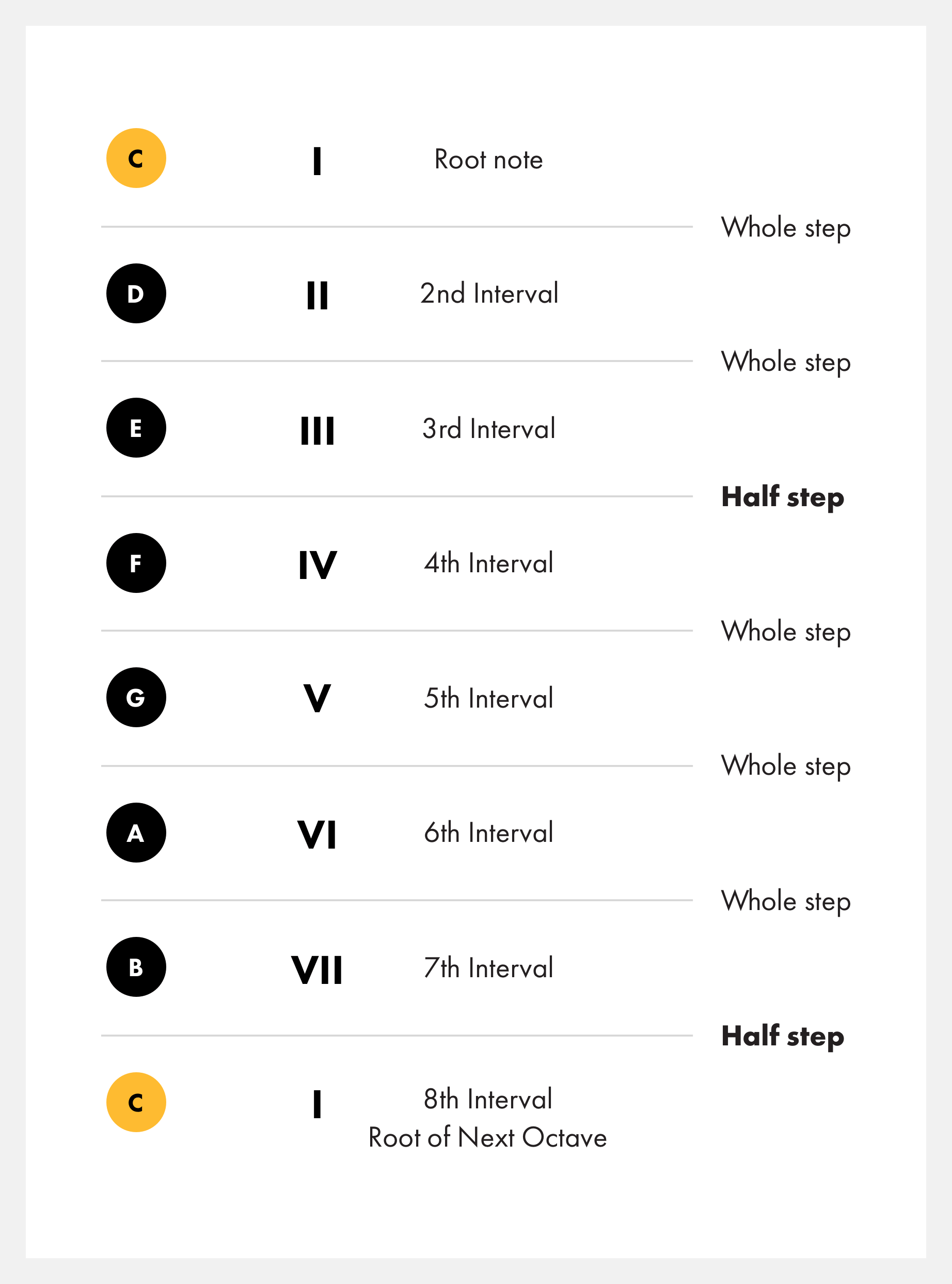 There is always a half-step between E and F, as well as B and C in the C major scale.

Now that, like Rick Astley, you know the rules (and so do I), you can use this formula for intervals to help you learn the notes contained in any major scale.

Looking to learn all twelve major scales on the guitar? Start with these free lessons for commonly-used major scales. Each lesson will guide you, step-by-step, through learning the notes of each scale and show you how to play them in a few positions.

If you have the hang of playing the scales above, you can get multiple patterns of all twelve major scales in the Fender Tune Player Pack. The Player Pack is an add-on to the Fender Tune app (on iPhone and Android) that gives you thousands of chord and scale diagrams at your fingertips. 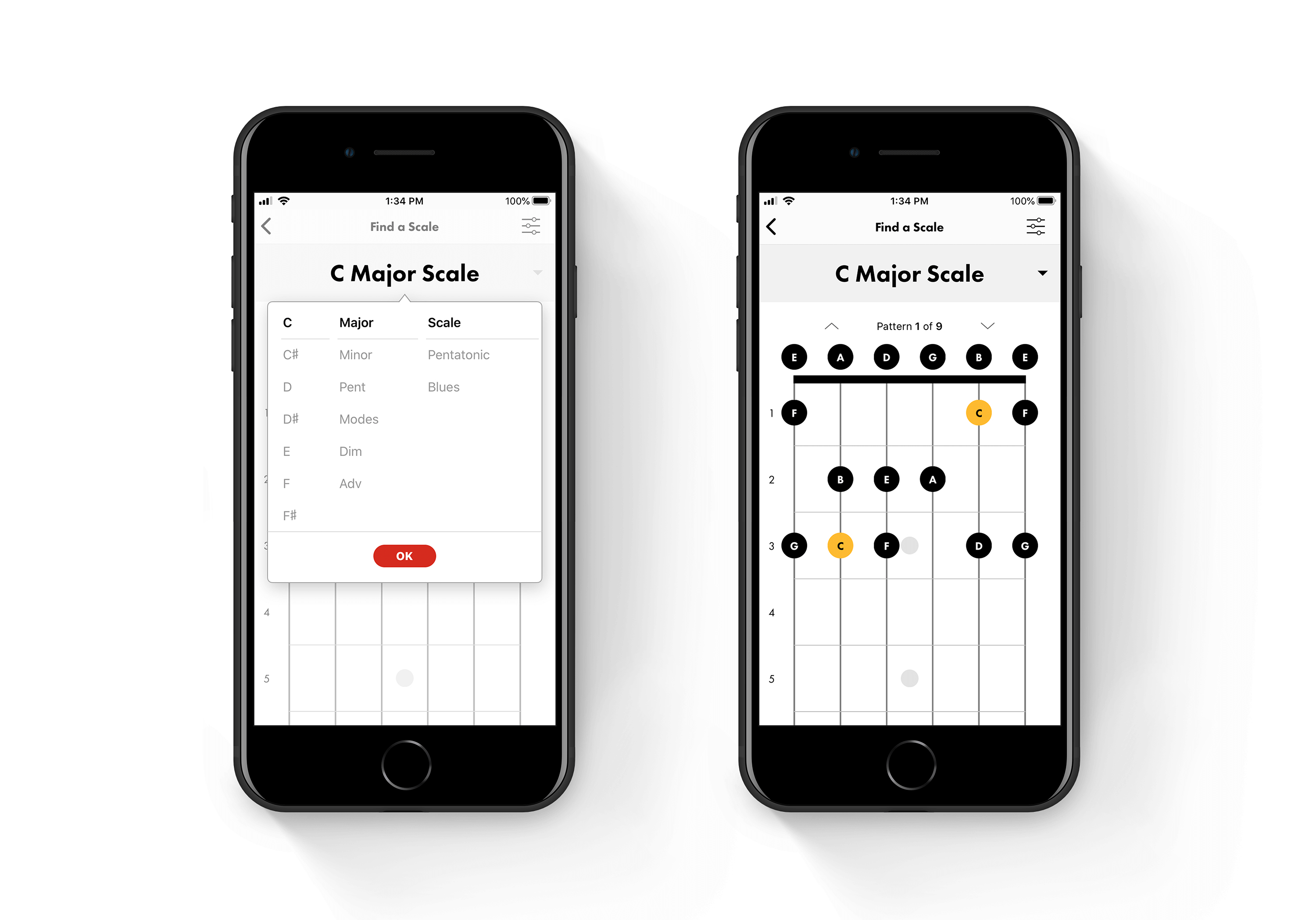 CAGED System: A Method for Learning Scale Patterns and Positions

Once you’ve learned how to play some common major scales on the guitar, you may want to take things one step further. There are certain musical concepts that will help you to better grasp the guitar fretboard as a whole vs. learning one-off scale patterns.

If you put in the work to understand these concepts, you’ll no longer be tied to playing the C major scale and others in one particular way. You’ll be able to play them fluently across the fretboard in various positions.

One of those concepts is the CAGED system. The CAGED system is a chord shaped-based approach to further understand the guitar fretboard.

In this clip from the “CAGED: 5 Easy Chords To Unlock Your Fretboard” Fender Play LIVE episode, Dr. Molly Miller and host Eugene Edwards explain the CAGED system and how it’s used by guitarists to learn the fretboard.

We call the system “CAGED” because we base everything on five simple, open position chord shapes:

Once you have an understanding of these chord shapes, we can move them OUT of open position and into moveable barre chord shapes. From there, you can then play those shapes anywhere on the neck of the guitar.

The CAGED system is a big concept—so we recommend taking it one step at a time. Check out the CAGED System: Major Scales collection in Fender Play for an in-depth course into the CAGED system.

On Fender Play LIVE, Dr. Molly Miller explains how shapes can be used as guide posts.

I Fought the Law with CAGED Chords

It takes time and practice to learn to play the guitar. Learning to play major guitar scales is a fundamental building block in your guitar education -- and gives you the tools you need to learn to play songs. Once you’ve gotten the hang of playing a few major scales, get started with a free trial of Fender Play. You can learn individual major scales as well as musical concepts like the CAGED system that will help you level up as a player. Then, the best part is that you can apply those learnings to your favorite songs. Play on!