Learn legendary guitar riffs and the history behind the songs, artists and lyrics.

By Perry Martin and Ben Nemeroff

There are tons of guitar riffs out there, but only a few have become deeply ingrained and ubiquitous in pop culture. They’re the ones you can’t wait to learn how to play; the ones you catch yourself humming; the ones that are revered worldwide by musicians and non-musicians alike.

Whether it’s the chugging heavy chords of "Smoke on the Water" or the groovy licks that fill your airspace throughout "Can't You Hear Me Knocking", some of the best guitar riffs moments of songs are the riffs and licks that define them.

In this article we'll cover how to play these six famous riffs, perfect for beginners:

Fender Play features tons of lessons that get you learning some of the most memorable riffs in just a few minutes! For a list of our favorite riffs and solos, check out the full Riff & Solos Collection in Fender Play or learn more about Fender Play Collections here.

What is a Riff?

In music, a riff is a repeated sequence of notes or chords that appears in a piece of music. A guitar riff is often catchy and helps give structure and character to a piece of music. Riffs most commonly appear in rock, funk, jazz, and Latin music, though they can be found in almost any genre of music. A riff can be a wide range of things - from a melodic lead line that is repeated throughout a song, to a particular chord progression, to even just a single note played with a unique rhythm. Most musicians use the term to describe any musical idea that exists within a song.

My Girl - The Temptations

The Temptations' first #1 hit “My Girl” has one of the most famous riffs of all time, and is a great riff for beginner guitarists to learn. This riff is immediately recognizable and will introduce you to some simple lead techniques like alternate picking.

When The Temptations first heard this song, they knew they had to have it. And that's why they convinced its writers - Smokey Robinson and Ronald White of The Miracles not to record it themselves. The bass line gives "My Girl" a heartbeat like no other song before or after it. You'll feel your heart beating too as you play along to one of the most soulful relics of 1964.

Learn the "My Girl" riff on guitar.

Read this article for more information on C Major which is the main chord used in this song.

Looking for a new instrument? Here are links to our current stock of Mustang Basses and Telecasters like the ones used in the video.

Smoke on the Water - Deep Purple

While riffs can be played by really any instrument in the band, most often riffs are identified with guitar and can often be the driving force behind a song. In fact some of the greatest guitar riffs are so memorable that they become the defining characteristic or idea in a song, despite not being played throughout the entire piece. For instance, the chugging guitar line that’s played during the verse of Deep Purple’s “Smoke on the Water” is the standout part of the song. Watch Glenn Brigman of Triptides talk about the various ways to play that iconic guitar riff on Fender Play LIVE:

When Deep Purple sat down for dinner in Montreux, Switzerland on December 4, 1971, they likely had no idea they would witness a casino fire at a Frank Zappa show nearby. Zappa had to stop the show after a fire was caused by an audience member shooting two flares that landed near the corner of the building. "Smoke on the Water" is about that fire on the night Zappa, who is referenced in the first verse, would lose all his equipment. Give your guitar a hug because you never know that the future can bring.

Learn the "Smoke on the Water" riff on Fender Play.

Check out this article for more information on the history of Deep Purple and "Smoke on the Water."

Click this link for our current stock of Mustang electric guitars like the one used in this video.

In some cases, a riff can provide a melodic background that the entire song is based around. A great example of this is with “Rebel Rebel” by David Bowie. The song opens with a fantastic first position riff that Bowie himself played on the record, and it’s simple yet catchy hook provides the basis for the rest of the song.

In the early 1970s, the "Glam Rock" era hit London by storm bringing extravagant stage shows and often times flamboyant makeup and hairstyles to the rock scene. In this song, Bowie seems to define the genre with lyrics telling the story of a young boy who revolts against his parents by wearing feminine clothing. "Rebel Rebel" is a reminder to us all to never compromise who we are or who we want to become.

Learn the guitar riff from “Rebel Rebel” on Fender Play.

Read this article teaching E Major which is the main chord used in the song.

Perhaps one of the most recognizable blues guitar riffs, "Mannish Boy" has been covered by countless artists, and included in the "Classics of Blues Recordings" category in the Blues Hall of fame. In this blues standard, the riff is a simple pentatonic sequence that leaves plenty of space for adding your own personal flourishes. For Waters, this song must have served as a declaration of being a man. If so, then he would have appreciated all three of the films it has been featured in - The Long Kiss Goodnight, Risky Business and Goodfellas.

When I Come Around - Green Day

Practice the finger patterns on your own a few times. Then, watch the video below to play along and get a rhythm for the riff yourself.

Released in 1994, the song introduced punk band Green Day to mainstream fans and ushered in a wave of pop punk. Propelled forward by a simple, yet catchy riff, “When I Come Around” has a bottom-heavy bounce to it. The idea for this song comes from a time back in 1990 when lead singer Billie Joe Armstrong was having trouble maintaining a long distance relationship with his then girlfriend Adrienne Nesser at the age of 18. Four years later, during Green Day's rise to fame, Billie and Adrienne would wed. They are still happily married today with two children.

Learn the song "When I Come Around" on Fender Play.

Can’t You Hear Me Knocking - The Rolling Stones

The year is 1971. The US lands three men on the moon with Apollo 14 and passes Amendment 26 lowering the voting age to 18. You are back in your dorm room listening to master riff creator Keith Richards, and not studying for tomorrow's math exam. When it comes to The Rolling Stones, the riffs are as memorable as songs themselves. Mick Jagger, Keith Richards and crew have a way of transporting their listeners, even if that sometimes means far away from studying for the math exam.

Learn the riff from "Can't You Hear My Knocking on Fender Play.

“Can’t You Hear Me Knocking” is a blistering classic rock riff that’ll introduce you to open tunings and Keith’s signature hammer-on chords. Here is an easy lesson on how to tune to "open G" which is required for this song. 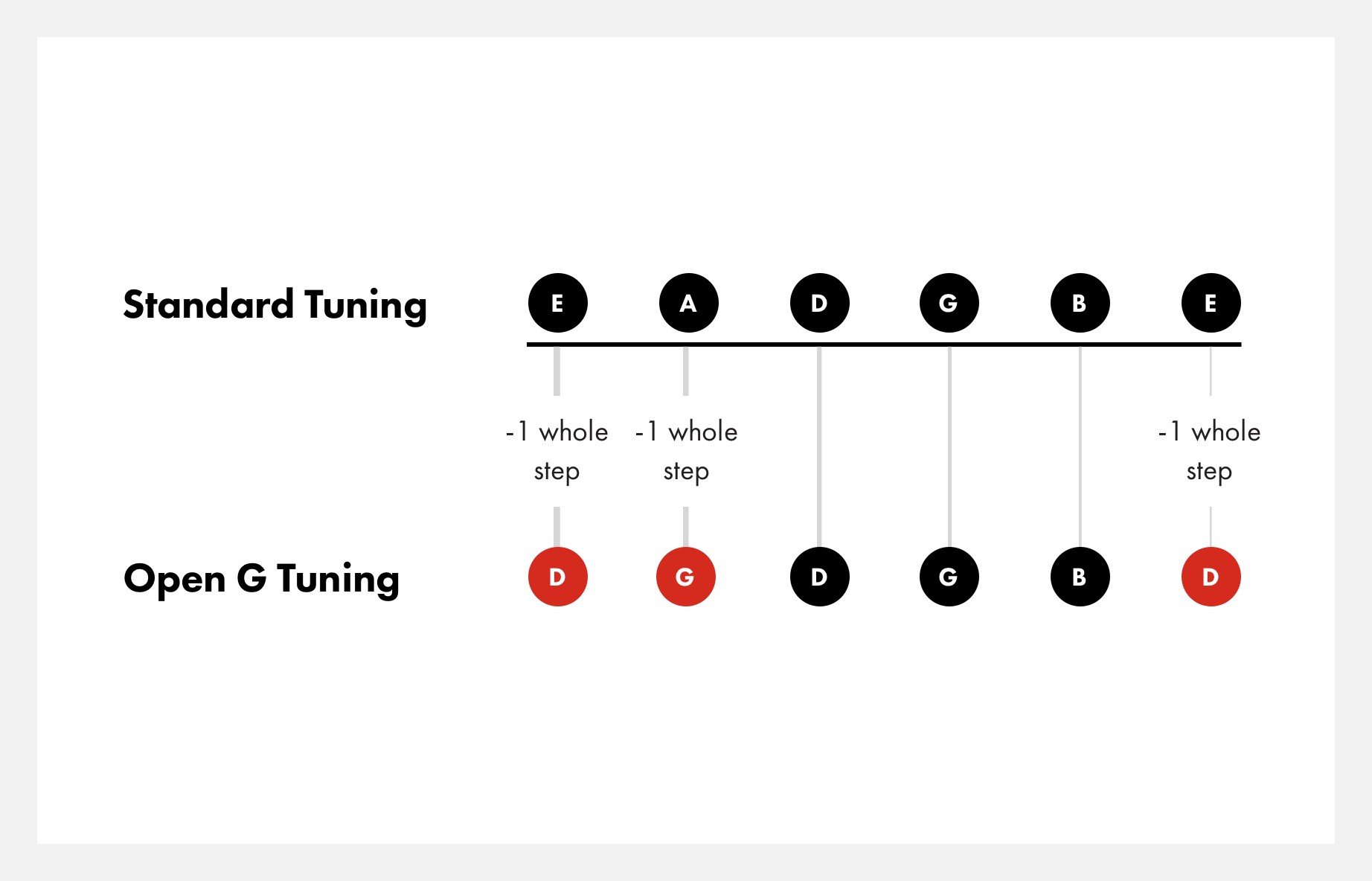 The great thing about guitar riffs is that they are often simple phrases, making them easier to learn than learning an entire song. Oftentimes learning a riff can be just as satisfying as learning a song from top to bottom and can be a fun way to learn something new (and impress your friends!).