Alternate tunings may seem intimidating, but simply tuning a few pegs on your guitar to different notes can create a whole new world of sound for guitarists. In this lesson we’ll show you how to tune your guitar to open G, an alternate tuning that’s popular in blues and folk genres. We’ll also talk about a few different songs you may already know that use open G tuning.

What is Open G Tuning?

Open G tuning is an alternate tuning that allows guitarists to play a G major chord without having to touch any frets or use a capo. Open G tuning gets its name from the open G chord because it requires guitarists to tune their strings to the notes that make up a G chord: G, B, and D.

In open G tuning, you can play a G chord without having to use your fretting hand. Strike your strings in an open position and you have a G chord!

Open G tuning also lends itself to a different, bluesier tone than standard tuning. This alternate tuning has woven its way into several genres, most notably blues and folk music. Robert Johnson, the forefather of blues used open G tuning, as did folk pioneer, Joni Mitchell. You can also listen for open G tuning in blues-tinted rock, by such legends as The Rolling Stones, George Thorogood, The Black Crowes, and more.

Lesson: How to Tune Your Guitar to Open G

Open G tuning changes the tuning of only three of your strings, but it makes a big sonic impact. Let’s walk through the differences between standard tuning and open G: 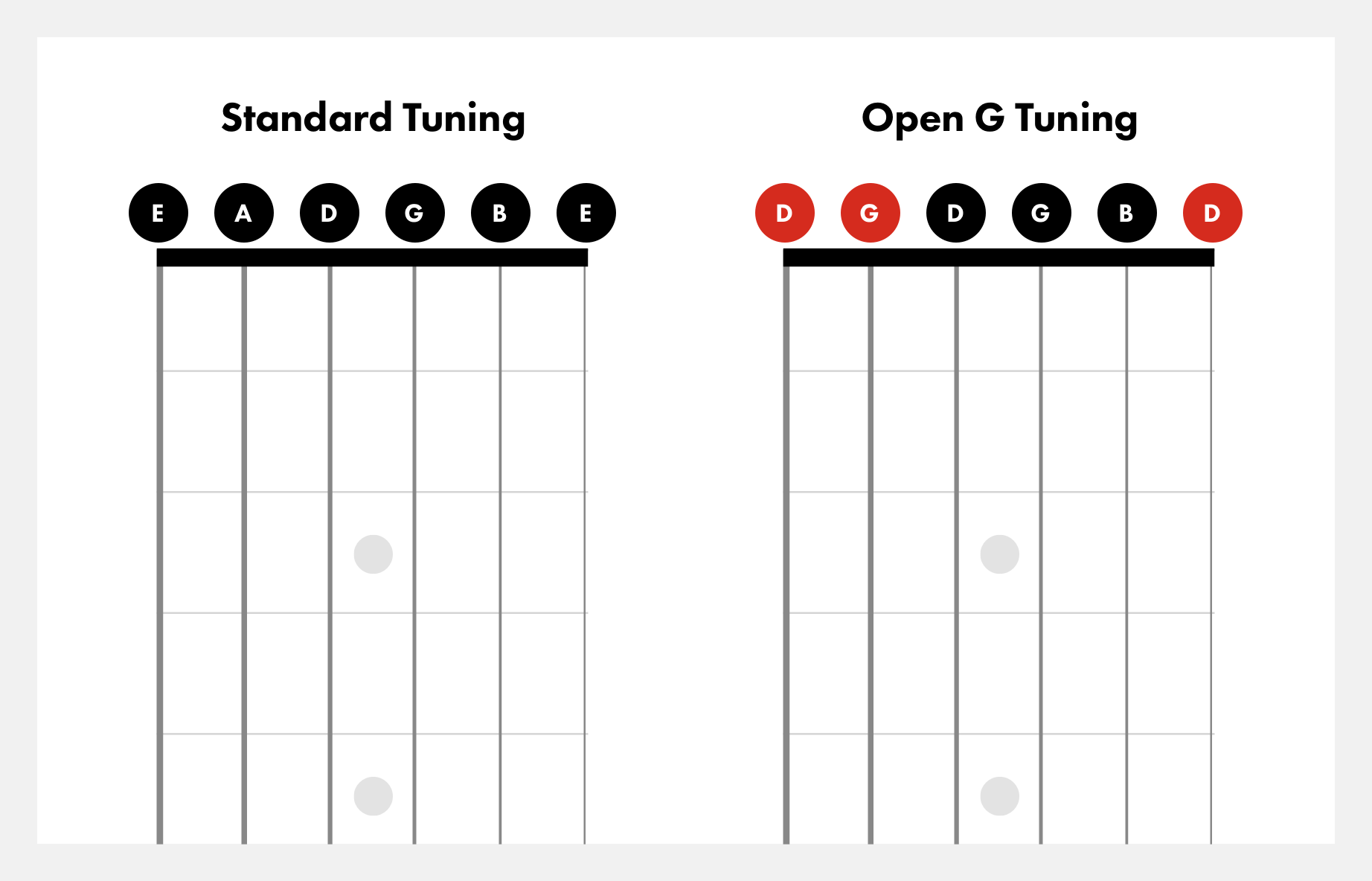 In standard tuning, your six strings are tuned like this, in descending order, from lowest-toned string to the highest:

Now that you have an idea of the differences between standard tuning and open G, there are a few ways you can tune your guitar to achieve this sound: Start by plucking your low E string. Tune it down a whole step by turning the tuning peg clockwise towards you. Keep plucking the string until you hear the correct note. Repeat for other strings that need tuning.Pro tip: You can use the Fender Online guitar tuner to help you tune your guitar to the correct note. Use either the Electric Guitar Online Guitar Tuner or the Acoustic Guitar Online Tuner. Or download the app for your phone. Both the web and app versions give you the ability to adjust your settings and tune specifically to Open G and other alternate tunings. If you don’t have a tuner, you can get your guitar into open G tuning by ear: Start by playing the note you’re trying to tune to on another string and try to match it. For instance, to tune your low and high E strings down to a D, play your D string and adjust the tuning peg until the notes sound similar. Keep in mind that your high and low E strings that are lowered to a D will be, respectively, one octave higher and one octave lower than the D string you pluck on your guitar. To tune your A string down a full step from G, pluck your G string and match the tone of your A string to it as you twist the peg clockwise towards you.

Both the blues and folk genres have leaned on open G tuning to deliver a rich, soulful sound. Classic rock (and even modern rock with classic rock flavoring), also uses open G to add a distinctive bluesy tone. Here are a few ways these genres have embraced open G tuning.

Folk icon Joni Mitchell used quite a few alternate tunings on many of her early hits. Open G tuning made it easier for her to fingerpick her acoustic guitar and create beautiful arpeggios that accented her high soprano voice on her lyrically poetic songs. Both “Little Green” and “Nathan LaFraneer” were examples of songs in open G tuning.

“Little Green,” ironically, appeared on Mitchell’s colorfully-titled album, Blue. The song touches on a variety of emotions and evokes beautiful imagery. On the flipside, “Nathan LaFraneer” is also oddly poetic in its way, conveying an image of a specific time and place, both good and bad. Open G tuning helps add to the atmospheric quality of both songs.

Originator of the Delta blues and perhaps the founding father of American blues, Robert Johnson paid homage to his mentor, Son House, in his slide-laden version of “Walkin’ Blues.” House recorded the song in 1930 and it may have been one of the very first instances of open G tuning that listeners were exposed to. Johnson’s heavy, rhythmic style was a nod to House’s original, but Johnson’s slide guitar stylings gave new life to this song when he recorded it six years after the original.

Blues great Muddy Waters also later recorded “Walkin’ Blues,” putting his own stamp on it, as did ol’ Slowhand himself, Eric Clapton. Clapton’s version added more of a rock element while still keeping a fairly traditional blues sound, true to its roots.

Many classic rock artists embraced a bluesy sound, merging it with heavy electric guitar. They also embraced open G tuning to further root their rock in a more blues-tinted tradition. Keith Richards was notorious for his use of open G tuning, which could be heard in The Rolling Stones’ classic, “Honky Tonk Women,” as well as a slew of the band’s other hits, including “Brown Sugar” and “Start Me Up.” Open G tuning has given Richards -- and the Stones -- iconic songs that continue to make an impact six decades later and still hold up!

Led Zeppelin also tapped a blues-influenced vein on many of their songs. Listen for open G tuning on the acoustic “Going to California” and “In My Time of Dying.” While Jimmy Page’s guitar and Robert Plant’s vocals on “Going to California” have more of a heavy folk feel, “In My Time of Dying” is far more blues influenced -- right down to its lyrics that take a hard look at mortality.

From founding rock icons to bands who made their mark in the ‘90s and into the 21st century, The Black Crowes were known for a bluesy Southern rock sound. The band used open G tuning on two of their big hits from their 1990 debut album, “Hard to Handle” and “Twice As Hard.”

Today, the rock group The Eagles of Death Metal (who, for the uninitiated, do not play death metal) also use open G tuning on many of their songs, including “I Only Want You” and “Secret Plans.”

Alternate tunings like open G can help guitarists play chords more easily and make it easier to try out new skills like playing slide. While experimenting with open tunings can seem intimidating at first, it unleashes a whole new sound from your instrument. With practice, you can master open G tuning and branch out into learning other tunings like drop D and open D. Listen and learn to play more alternate tunings with a free trial from Fender Play.