How to Play the D Major Chord on Ukulele

This chord might be a challenge, but it's essential to any player.

The D major chord (commonly referred to as a D chord) is an important chord for beginner players to learn on ukulele. This article will describe the notes that make up the chord, different ways it can be played on the fretboard, and some songs that feature the D major chord that you can learn to play on the ukulele.

Lesson: How to Play a D Major Chord

The D major chord is made up of these three notes:

This triad is made up of notes from the D major scale (D, E, F#, G, A, B, C#), which contains two sharps. Triad chords like this one are formed by taking the first, third, and fifth notes of the scale.

These three notes can be combined in several different ways to form slightly different-sounding variations of the D major chord on the ukulele. We’ll show you some basic ways to approach playing this chord, as well as some examples of how it’s used in popular songs, so you can hear how it sounds and learn it for yourself.

How Do You Play a D Major Chord on Ukulele?

There are several ways to play a D major chord on the ukulele. We’ll walk you through where to place your fingers on the fretboard of your ukulele and which of the four strings you’ll strum to play different versions of the chord.

We’ll also use ukulele chord charts to provide a visual representation of where exactly to place your fingers for each variation of the chord.

On ukulele, the lowest-toned string is actually your third string (A). This is different from the string order on a guitar where the strings go in descending order.

Here’s a key to better understand notations to play the D chord on our ukulele chord charts. The diagrams represent your ukulele fretboard, and the numbers or icons used show you your finger positions on each fret or how to play a specific string in a version of a chord:

The D chord can conveniently be played in open position (meaning it utilizes open strings that you don’t even have to press down on the fretboard). We’ll go over three different versions of open positions for this chord. For this first version, you’ll start by placing your index finger on the 2nd fret of the E string. With the middle finger, you’ll jump across one string to the 2nd fret of the G string. Your ring finger will go right between the two fingers you already placed on this 2nd fret and press down on the C string on the same fret. You won’t use your pinky finger at all for this chord shape.

Again, here are each of those finger positions: 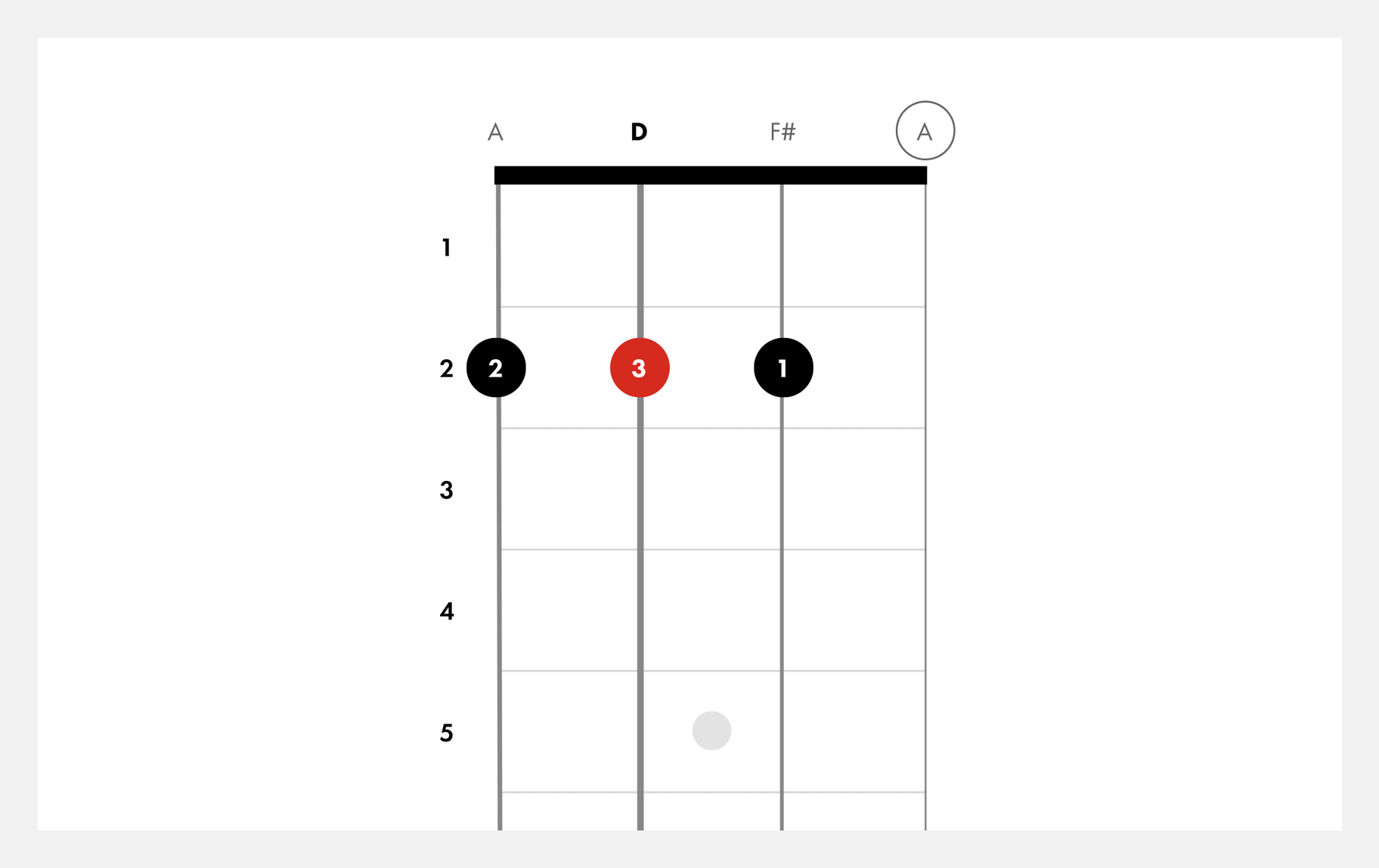 Strum all three of those fretted strings, plus the open A (1st) string. Make sure you arch your index finger enough so that you aren’t covering that 1st string at all and it can ring out freely

In the second version of the open position of the D chord, you’ll play the exact same notes, however, you’ll arrange your fingers differently on the fretboard. It’s just a matter of preference, which version you find more natural. For this variation, we’ll place the index finger, middle finger, and ring finger in order, across the 2nd fret, on the 4th, 3rd, and 2nd strings, respectively. This resembles a commonly-used shape for the A major chord on guitar. 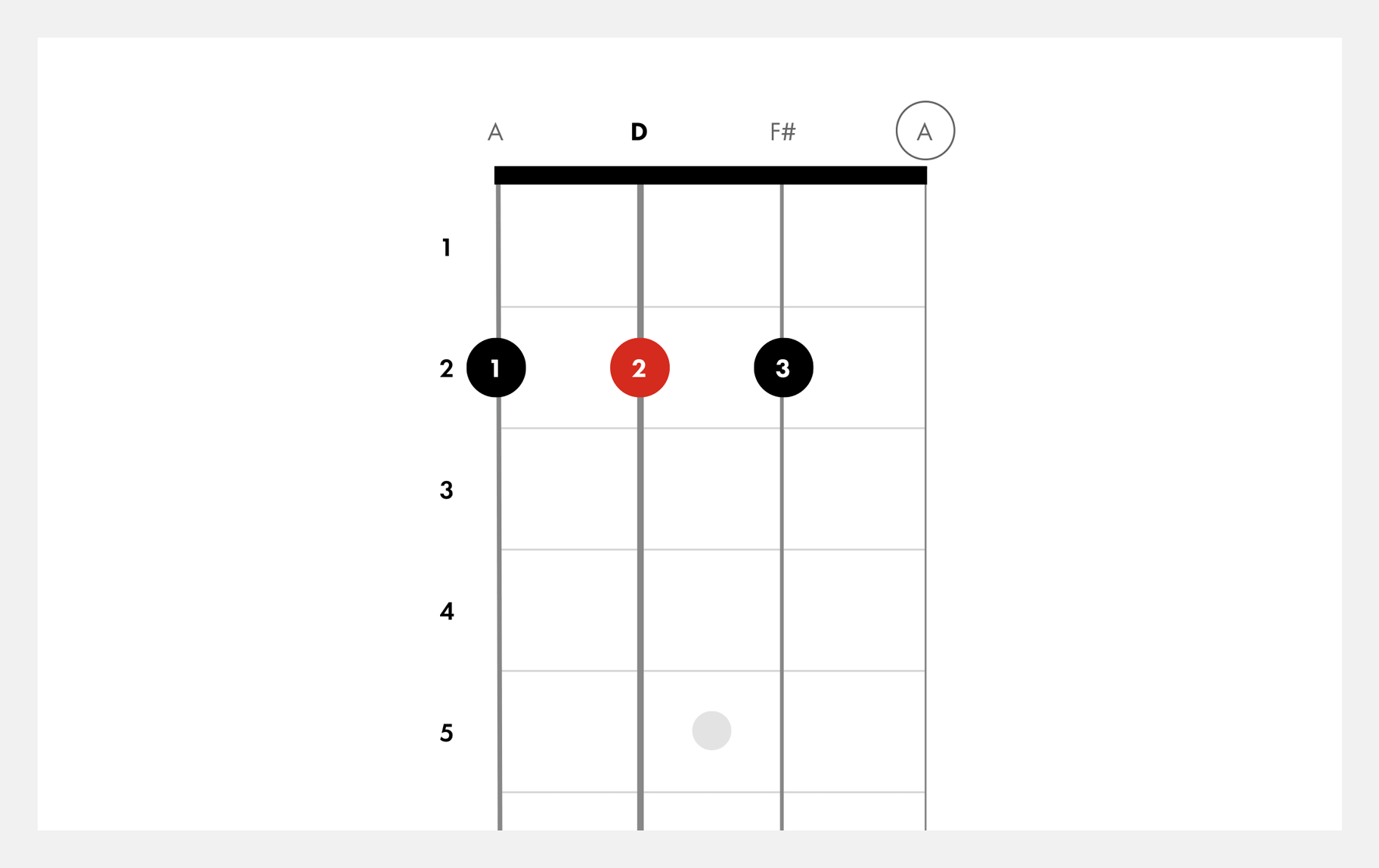 This third version of the chord is perhaps a more simplified variation, and it might be suitable if you’re having trouble getting three fingers to feel comfortable sharing the same fret or find it difficult to avoid muting the open 1st string. This version eliminates playing the 4th string at all, and instead just focuses on the three notes of the original D major triad (D, F#, A). 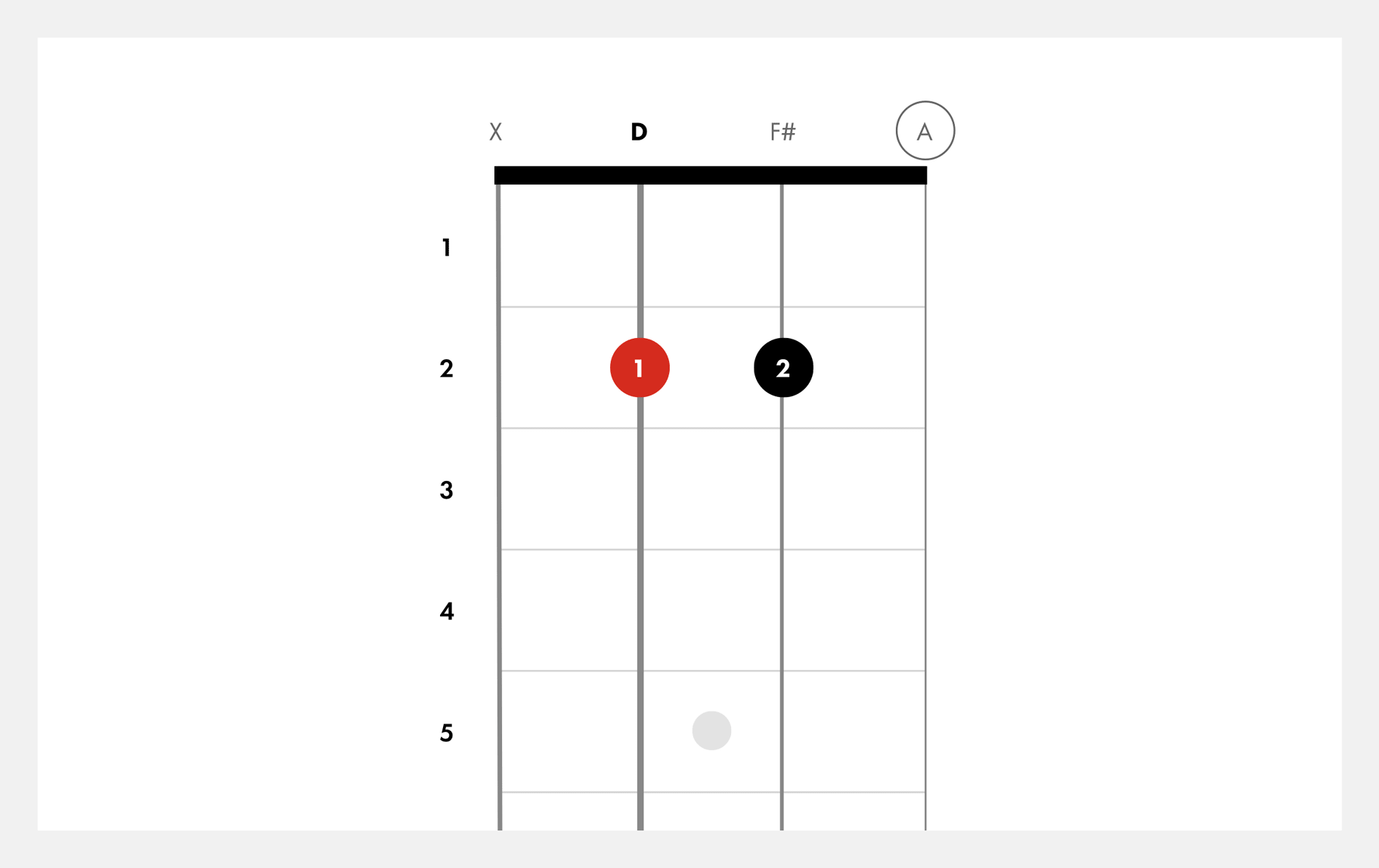 Again, you’ll strum all four strings, including the open A string. (This time, you’ll just have to be sure your ring finger isn’t muting that 1st string). Despite the differing finger positions, the chart for this looks the same as the first version above.

Songs That Use the D Chord on Ukulele

It’s a good idea to figure out which versions of the D chord that you feel most comfortable with and practice playing it along with other chords you’ve learned. The next step is to try to learn some songs that use the chord to see how it’s been used by other artists and musicians. This will help you understand how the D chord really sounds, when combined with other chords, in the framework of familiar songs.

Let’s start with an American country classic dating all the way back to 1939, “You Are My Sunshine.” The D major chord in this song actually serves more of a supporting role in this song, which has verses mainly built on G major (the root chord) and C major (the 4th). The D chord only comes in at the end of those verse lines, but it represents a prominent shift, behind the word “sunshine,” in the “Please don’t take my sunshine away” refrain. Notice the way this newly-introduced chord adds extra weight to this last section of each verse and provides a sense of resolution.

Now let’s look at a 21st century rock song, which features the D major chord as the root chord: Jimmy Eat World’s “The Middle.” In this song, the D chord is the central focus, driving most of the verse progression, as well as the loud, ringing chord that begins the emphatic chorus section of the song. Similar to “You Are My Sunshine,” “The Middle” also uses the root chord (D), the 4th (G), and the 5th (A) to create a simple but memorable progression.

For a little bit more of a challenge, take a look at the lesson for an even more recent indie rock hit: “Pumped Up Kicks” by Foster the People. This song has a much different feel, with the progression starting on the E minor chord and taking on a darker, more mysterious trajectory. From there, it moves to G major, then our D major, before resolving to A major. This lesson also goes over a single-note picking sequence for the song’s intro section, for those looking to take on a different kind of playing challenge that involves more than just mastering chord shapes

Mastering the D major and other chords on ukulele takes time and practice. Spending the time to get familiar with this chord will make it easier to learn others that use similar shapes. Try learning other chords like G major or B minor, then practice transitioning to them from the D major shape. Sign up for a free trial of Fender Play to access more detailed tips for perfecting your technique, learn more chords, and figure out how to play them in songs you love.