The Starcaster: Explore One of Fender's Strangest Creations

Get the inside story on Fender's unique semi-hollow model. 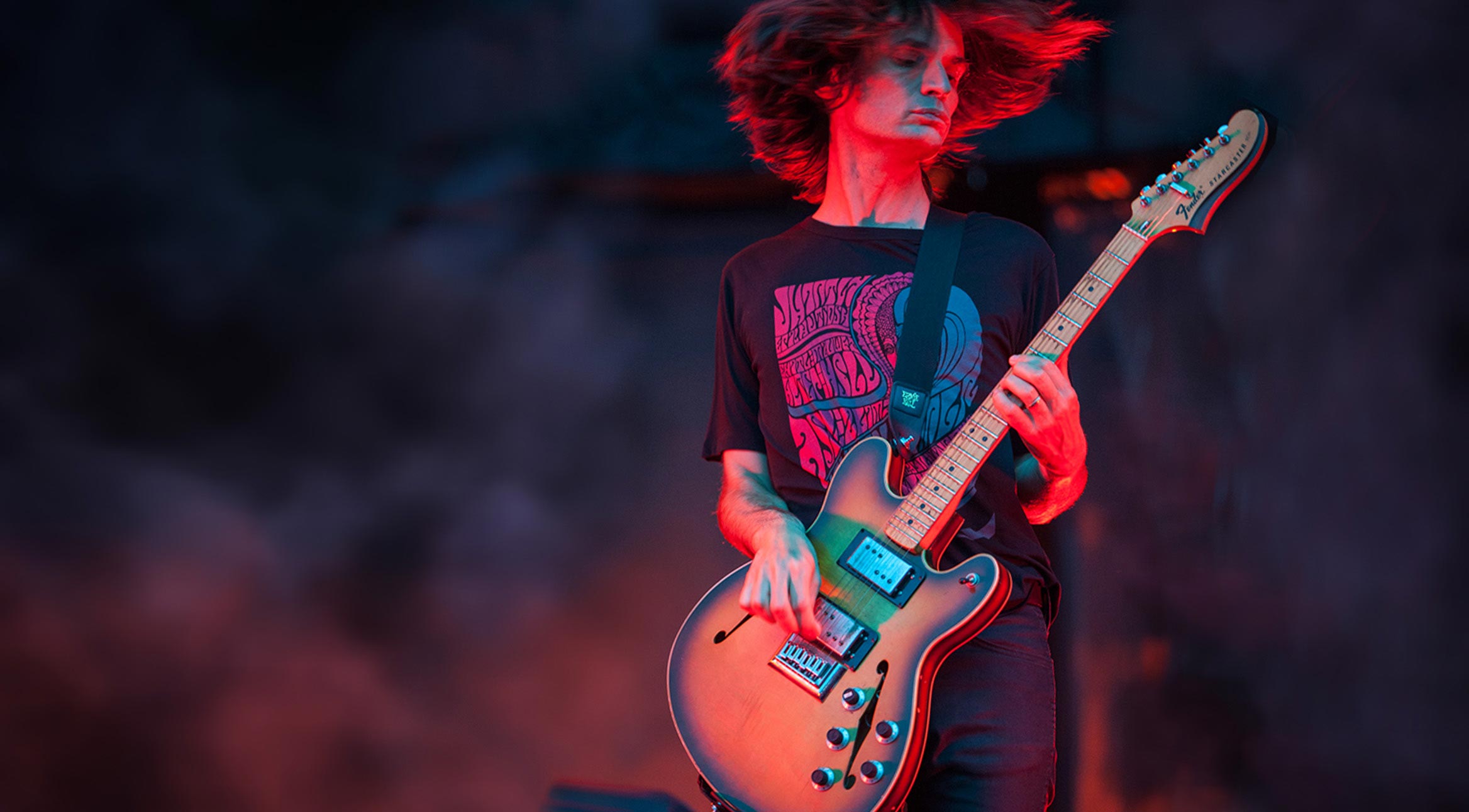 Often considered one of the more esoteric novelties in the history of Fender guitars, the Starcaster—with its uniquely offset semi-hollow body and curvaceous, divisive headstock—arrived in 1976 as the company’s first new electric model in three years. It proved unpopular at the time and was discontinued by the fall of 1980, but over the years its unique shape, full-throated tone and rarity in the vintage market helped boost its popularity. In 2013, due to rising demand, Fender reintroduced the Starcaster and put into production the Starcaster bass—the only offset semi-hollow bass guitar in Fender history.

The 2013 Special Edition release, pictured above, maintains many of the features of the original including maple construction, dual f holes and two Fender Wide Range humbucker pickups with chrome covers. The neck radius is slightly more compact at 9.5-inches rather than 10, but features the same 22 medium jumbo frets. Other changes include the removal of the master volume control and the addition of an Adjusto-Matic bridge with anchored tailpiece.

Whereas you’d have been hard pressed to find Starcasters in many high-profile hands during its original 1970s era—Leo Nocentelli of the Meters is a notable exception—you needn’t look very hard today to see them put to prominent use by several noted guitarists both on stage and in the studio.

Introduced in 1976, the Starcaster—a rare, semi-hollow addition to the Fender line—failed to excite players at the time and was cut from the price list by the fall of 1980.

And that’s too bad because by most accounts the problem wasn’t that the Starcaster wasn’t a good guitar. On the contrary, those who know the Starcaster generally regard it these days as an instrument that offered solid build, tone and feel. With hindsight, most seem to agree that the Starcaster never caught on for two reasons: unfortunate timing and misguided intent.

The timing was unfortunate in the sense that the mid-to-late 1970s was a troubled period in Fender history. As the decade wore on the company found itself selling more instruments and amps than ever, but quality control problems under the cost-cutting rule of CBS, who purchased the company in 1965, were well evident by this time, and murmurings were beginning to circulate that if you wanted a good Fender guitar or amp, you needed an older one that pre-dated their purchase of the company.

As for intent, there’s no doubt that the Starcaster was Fender’s best effort yet at going after a piece of the humbucking-equipped semi-hollow-body market long dominated by Gibson and its ES series. (Fender had tried “thinline” hollow-body guitars and basses before with its Coronado line during the 1960s, but these achieved little success and were discontinued by 1972.)

Which brings us to the Starcaster. In the early 1970s, CBS wanted to use up old Coronado stock and enlisted Fender designer Gene Fields to do so. Fields joined Fender R&D in 1961 and had worked on instruments including the PS-210 keyless pedal steel, Mustang Bass, Musicmaster Bass, Bronco guitar and the aborted '60s version of the Marauder guitar.

Fields got to work, but as noted in author Tony Bacon’s 50 Years of Fender, “early prototypes were too obviously outings for scrap components.” Noting this, CBS had Fields design an entirely new instrument, and what he came up with was a hollow-body electric that fit somehow also fit Fender's historic aesthetic. 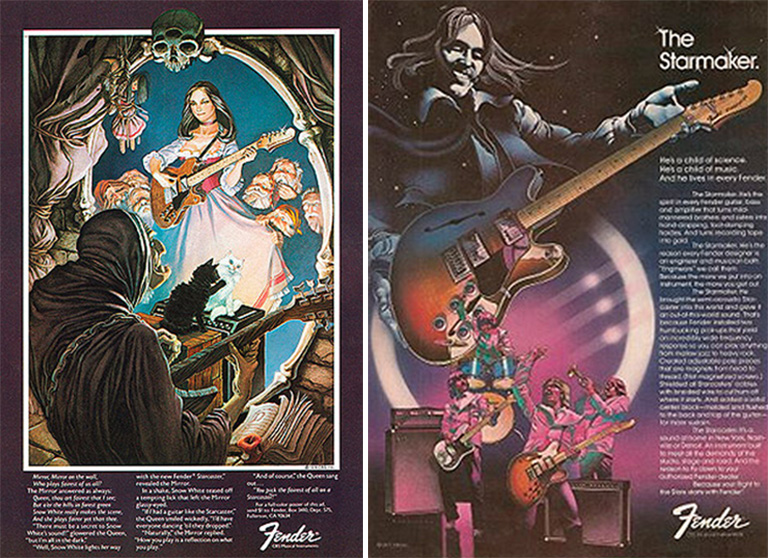 Unusual for a semi-hollow guitar, the Starcaster had an offset waist — a classic Fender design element made famous by earlier solid-body models, most notably the Jazzmaster guitar (1958) and Jazz Bass (1960). This offset double-cutaway body featured front and back binding and a solid maple center block that provided sturdiness and sustain not found in the Coronado models a generation earlier. The Starcaster had an arched laminated maple top with dual f holes and a maple back and sides. It came in several “thick-skin” high-gloss finishes including Blonde, White, Black, Natural, Walnut, Antigua, Wine, and Tobacco Sunburst.

The Starcaster’s bolt-on neck was another Fender hallmark. It was made of hard-rock maple with a "bullet" truss rod adjustment and Micro-Tilt neck adjustment. It also featured an unusual six-on-a-side headstock design with a dark-painted fin-like curve opposite the tuners and below the logo—Fields originally came up with this headstock design for the ill-fated 1966 Marauder. Its 10-inch radius maple fingerboard had 22 nickel-silver medium jumbo frets and black-dot inlays.

Other features included a three-ply black-white-black pickguard, a six-saddle adjustable bridge, Grover Rotomatic tuners, stainless steel flatwound strings and a hardshell case. A handful of prototype Starcaster basses were also made, but these never entered production at the time.

Despite its unique value proposition guitarists seemed indifferent. “It was a much better instrument than some of the previous (Fender) hollow-body models, but still failed to excite players,” Bacon notes.

Whatever the reasons, the Starcaster fell short of the stars it aimed for and was discontinued in 1980.

Confusingly, Fender dusted off the Starcaster name in the early 2000s for an entire line of value-priced, entry-level instruments. These “Starcaster by Fender” guitars and drums, however, had nothing to do with the original Starcaster guitar, which has undergone something of a rehabilitation. In 2013, due to rising demand, Fender reintroduced the Starcaster, the Coronado, and put into production the extremely rare Starcaster bass—the only offset semi-hollow bass guitar in Fender history.