Learn how to play the F sharp minor (F#m) chord on guitar & get started learning your favorite songs. Check out the guitar chord charts to grow your skills.

Lesson: How to Play an F Sharp Minor (F#m) Chord

The F sharp minor chord is a staple in many classic songs. You’ll often see this chord written as F#m with the “#” indicating “sharp” and the “m” indicating “minor.”

The F#m chord brings drama and depth to songs in the keys of E major, A major, and D major. Some versions of this chord can be tricky, but in this lesson, we’ll teach you how to play a simple version that is approachable for beginners. It’s a great way to get familiar with F#m without having to barre all six strings on the guitar. Once you get used to this simplified version, you can move on to more challenging chord formations.

Friendly reminder: A sharp raises the pitch of a note by a half step. Therefore, F# is one half-step higher than F. And in the same way that you can raise a note with a sharp, you can also use a flat (denoted with the ♭ symbol or a lowercase “b”) to lower a note by a half step. By these rules of music theory, F# is the same as Gb. It’s the same note, written in two different ways. So once you learn the F#m chord, you’ll have also learned Gbm.

How Do You Play an F Sharp Minor Chord on Guitar?

The F#m chord is made up of three notes:

The F# note is the root note, the A note is the lowered or flat third, and the C# note is the 5th interval. This formula for minor chords (1,♭3, and 5) produces a melancholy sound, particularly when contrasted with a major chord.

Now that you understand which notes make up the F#m chord, it’s time to play it.

There are many ways to play an F#m major chord on the guitar, but we’ll start by learning how to play a simple version in the second position.

Start by placing your ring finger (a.k.a. 3rd finger) on the 4th fret of the 4th string. Then, barre your index finger over the second fret of the three highest strings (first, second, and third). Remember: to barre means to use one finger—usually your index finger—to press down multiple strings at once on a single fret.

Here’s a detailed breakdown of that finger placement:

Once your fingers are in place, strum four strings down from the D (4th) string and you’ll hear a high, delicate version of F#m. Don’t play the two lowest strings (E and A in standard tuning).

Here’s a chord chart to help you play this version of the F#m chord: 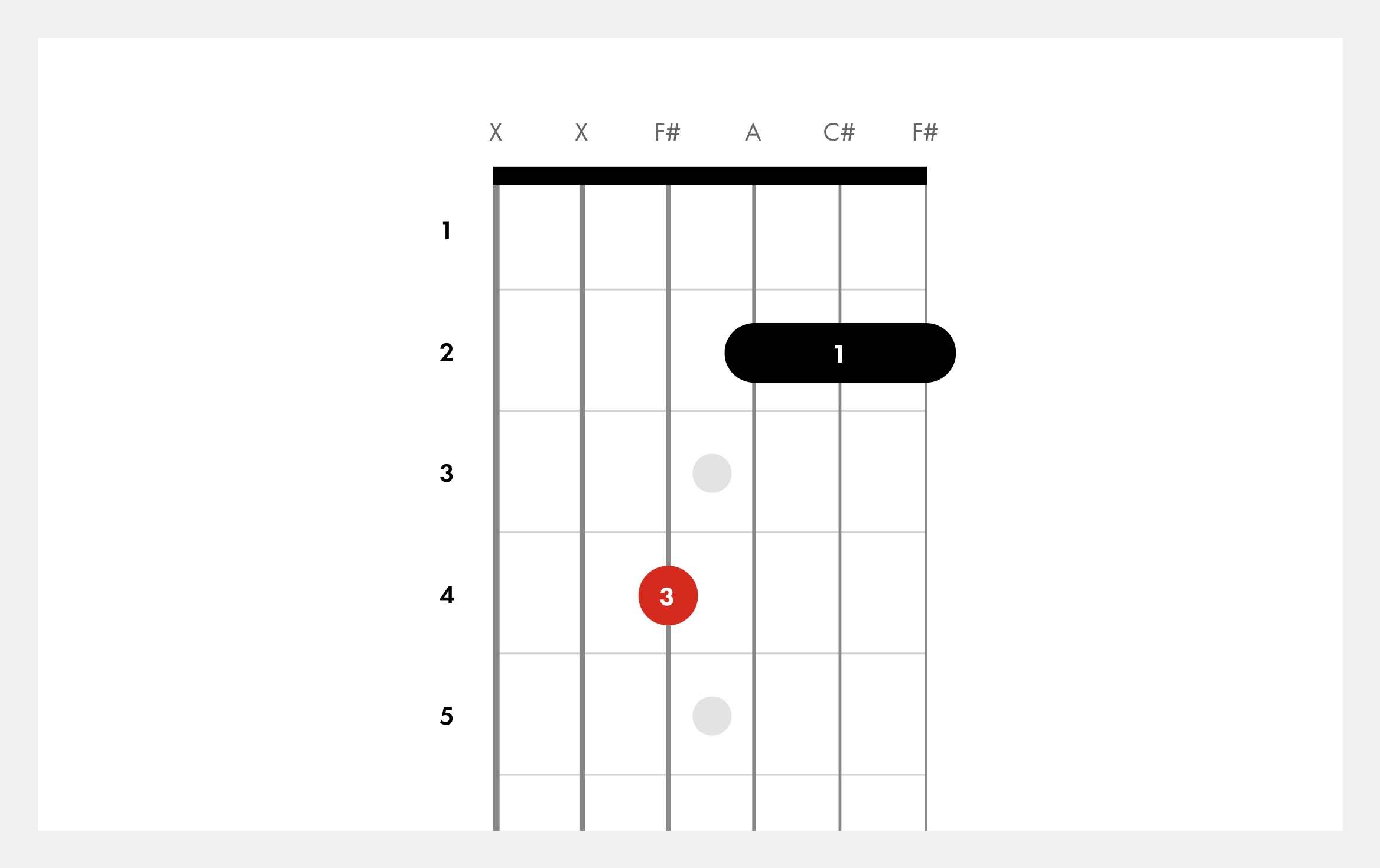 Songs That Use the F#m Chord

Ready to put the F#m chord to use? Let’s talk about a few songs that use F#m. Unlock all the lessons below (and more!) when you sign up for a free trial of Fender Play.

Let’s start with “Hey Jealousy” by the Gin Blossoms. This upbeat 1992 rock hit features the F#m chord in both the verse and chorus to contrast the bright-sounding D, E, and A major chords. F#m is the most challenging of the four chords that make up this jammer, so you’re already on your way!

If you’re interested in learning guitar and haven’t yet listened to Dinosaur Jr., now’s the time. Inspired by Black Sabbath and their classic rock ilk, J Mascis and company created a unique blend of punk, rock and indie alternative. They are largely credited with bringing lead guitar back to indie rock. From their band bio on Spotify: “…along with their peers the Pixies, they injected late-’80s alternative rock with monumental levels of pure guitar noise.” Their 1994 song “Feel the Pain” is a great example of this. The underlying song is six chords, including F#m. (P.S: Don’t let J Mascis’s unbridled guitar playing intimidate you. Everyone was a beginner once. Start by learning the chords and strumming along. When you’re ready, level up and learn the riffs. The Fender Play lesson helps you do both, step-by-step.)

Let’s talk about one more. With ethereal harmonies and pop-folk sensibilities drawing comparison to The Zombies and The Beach Boys, Seattle’s Fleet Foxes came on the scene in 2008 to widespread acclaim with their self-titled album and its lead single “White Winter Hymnal.” This one is only four chords, including F#m, and is a perfect song to learn if you have some friends who want to sing along in harmony. Once you learn the main part of the song with its flowing melody and consistent strumming pattern, you can simply repeat it a few more times. Sit around a campfire (or stream a fireplace scene from YouTube) and get lost in the cyclical beauty of this tune.

F sharp minor isn’t the easiest of chords to learn. Barring your fingers over even a few frets takes getting used to, but it will help you gain finger strength—so stick with it! Every time you learn a chord like F#m that may be slightly out of your comfort zone, you’ll get stronger.

If you’re starting to get the hang of the F#m chord, try learning E major, A major, and B major. These four chords are all part of the key of E and will help you to learn more songs you love. You can also check out Fender Play’s chord library with dozens of additional free chord lessons like this one.

And if you haven’t checked it out yet, sign up for a free trial of Fender Play today. Experienced instructors provide bite-sized lessons so you can learn chords like F#m at your own pace along with techniques, exercises, and songs. We truly believe it’s the best way to learn guitar online and to achieve your goals. Give it a try today!