Learn how to tune your guitar to open E and start playing your favorite songs in open E tuning.

One way to advance your skill as a guitar player is to experiment with alternate tunings. There are a variety of popular tunings that guitarists have utilized in all kinds of creative ways, adding new dimensions to the sounds they create. One of these ways is using “open” tunings, which involve tuning all six guitar strings so that all of the open notes together form the notes of a major chord.

In this lesson, we’ll focus on open E tuning. We’ll demonstrate how to tune to open E, discuss why you may want to experiment with alternate tunings, and review some examples of how open E tuning has been used in popular music.

Lesson: How to Open E Tune a Guitar

Open tunings allow guitarists to strum all six open strings to play full chords. The E major chord is a powerful open chord, which already uses three open notes in standard tuning. To tune to open E, the other three strings are tuned up, either a whole step or half step.

What is Open E Tuning?

If you visualize an E major chord in open position, you’ll need to tune the 3rd, 4th, and 5th strings up so that the open notes of those strings become the notes that would normally be fretted for the E major chord. 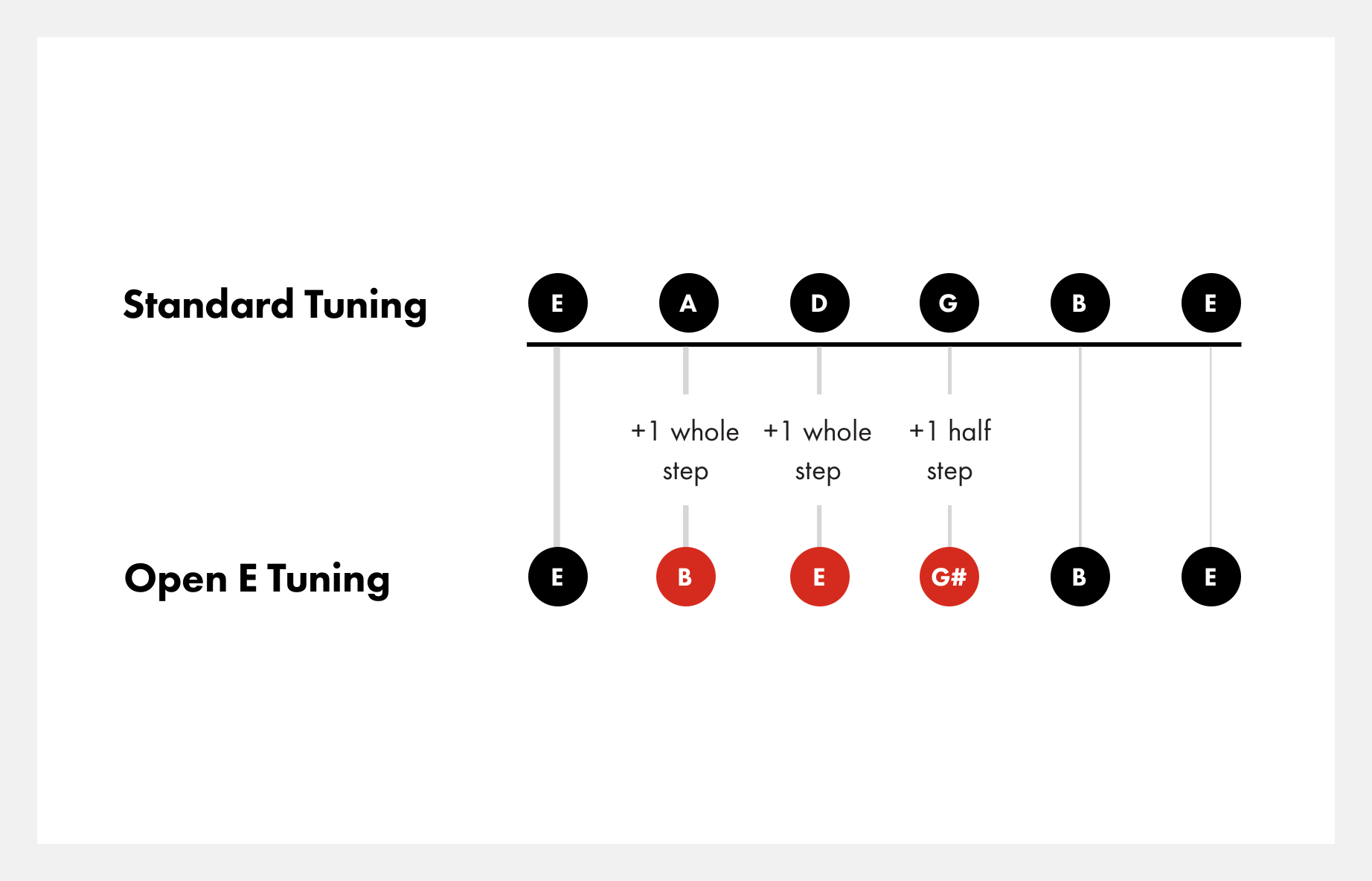 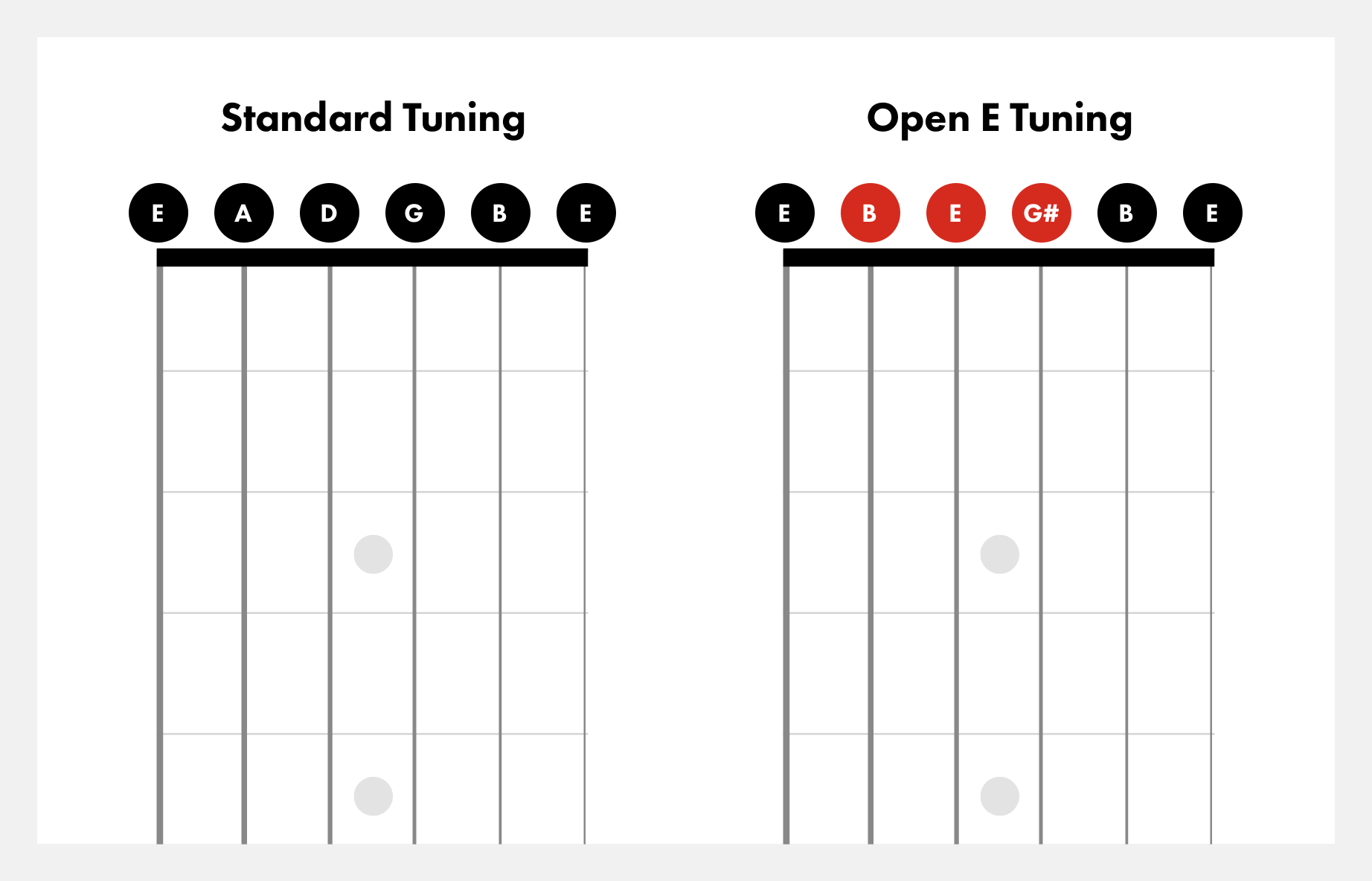 Here’s how you would adjust your strings from standard tuning to open E: Start by plucking the 5th (A) string.

Turn the tuning peg for this string away from you, raising the pitch of the string.

Keep turning the peg and plucking the string until you reach the note B. Pro tip: The Fender Online guitar tuner can help you tune your guitar to the correct note. You can use either the Electric Guitar Online Guitar Tuner or the Acoustic Guitar Online Tuner, or download the app to your phone. Both the web and app versions give you the ability to adjust your settings and tune specifically to open E and other alternate tunings. The string should have the same tone as the B string, although that string will be an octave higher.

Lastly, move over to the 3rd (G) string, and tune this one up just a half step to G#.

If you’ve tuned correctly, you should be able to hear all the familiar notes of an E major chord when you strum across all six open strings. It’s possible you may have to go back and readjust some of the newly tuned strings, until your guitar adjusts to the new tension of these three strings.

Tuning your guitar to open E accomplishes a few different things. First, it allows you to play major chords at various points along the fretboard by simply barring your finger across any one fret. For this reason, it’s a popular tuning for slide guitar players.

Another reason why guitarists enjoy playing in open tunings is because it allows them to play different variations of chords that take advantage of the ringing of open strings. They can also easily play harmonics across the 5th, 7th, 12th frets that form pleasant-sounding major chords.

Songs That Use Open E Tuning

Open E tuning can be used in many genres, but it has probably most often been put to use in rock and blues music.

Because E major is a frequently used key for blues, the open E tuning is often used by blues guitarists, particularly slide guitarists. Blues pioneers like Bo Diddley experimented with the tuning -- most notably heard on his self-titled tune, “Bo Diddley.”

Bridging the gap between rock and blues, The Rolling Stones’ Keith Richards was a huge fan of open tunings, and he leaned heavily on the use of jangling open strings as part of his trademark style. Iconic songs like “Jumpin Jack Flash” and “Gimme Shelter” use open E and make use of lush chords and frequent hammer-on and pull-off fills.

Bob Dylan was so enamored with open E tuning that he wrote his entire Blood on the Tracks album using the tuning (though some songs were later recorded using standard tuning). You can hear some of the beautiful chord voicings he was able to achieve with open strings on a song like “Shelter From the Storm.”

A more modern use of the tuning is on the Black Crowes’ 1990 hit single “She Talks to Angels,” where the acoustic guitar moves freely between sections of melodic chords, sliding lead phrases, and carefully placed harmonics.

Branching out with alternate tunings can be a real challenge. It forces you to reimagine the fretboard and learn new sets of chord shapes. However, these tunings can open up new possibilities and expand the depth of sounds you can create on the guitar. Sometimes a new tuning can give a guitarist a completely fresh perspective and provide a new canvas on which to experiment. With a free trial of Fender Play, you can work on mastering open E tuning, or a few useful open tunings, like open D or open G.