Drop A Tuning on Guitar

Learn how to tune your guitar to Drop A and start playing your favorite songs in Drop A tuning.

A large part of becoming a better guitarist means becoming proficient in various chords, but it also includes knowledge and experience in a variety of tuning styles. Drop A tuning is an alternate tuning in which your whole guitar is tuned down a perfect fourth from standard tuning, and tunes down your low E string an additional full step.

In this lesson, we’ll cover how to tune your guitar to drop A, why it’s important to experiment with alternate tunings, as well as songs and popular genres where drop A is used. Let’s get started.

Lesson: How to Drop A Tune a Guitar

Traditionally, drop A tuning is primarily an alternative tuning best suited for seven-string guitars, where the lowest string is tuned down (or dropped) from the standard B by one whole step to A. However, this lesson will only cover the six-string version of drop A tuning.

What is Drop A Tuning?

Drop A tuning involves tinkering with the tone of more strings than drop D, as it involves changing the pitch of all six strings, versus just one string for Drop D. For a six-string guitar, drop A involves tuning all strings down a 4th with the lowest string (sixth string) tuned down one additional step.

Sometimes the tuning in drop A for the second string is written as F#, other times it’s written Gb. These notes are called enharmonic pitches in that they sound the same but have different names.

Drop A tuning alters the pitch of all six strings down a 4th with the lowest E string (6th string) being tuned down an additional step. In drop A tuning, your strings would be tuned, as follows:
-- A (lowest string)
-- E
-- A
-- D
-- F#/Gb
-- B (highest string) 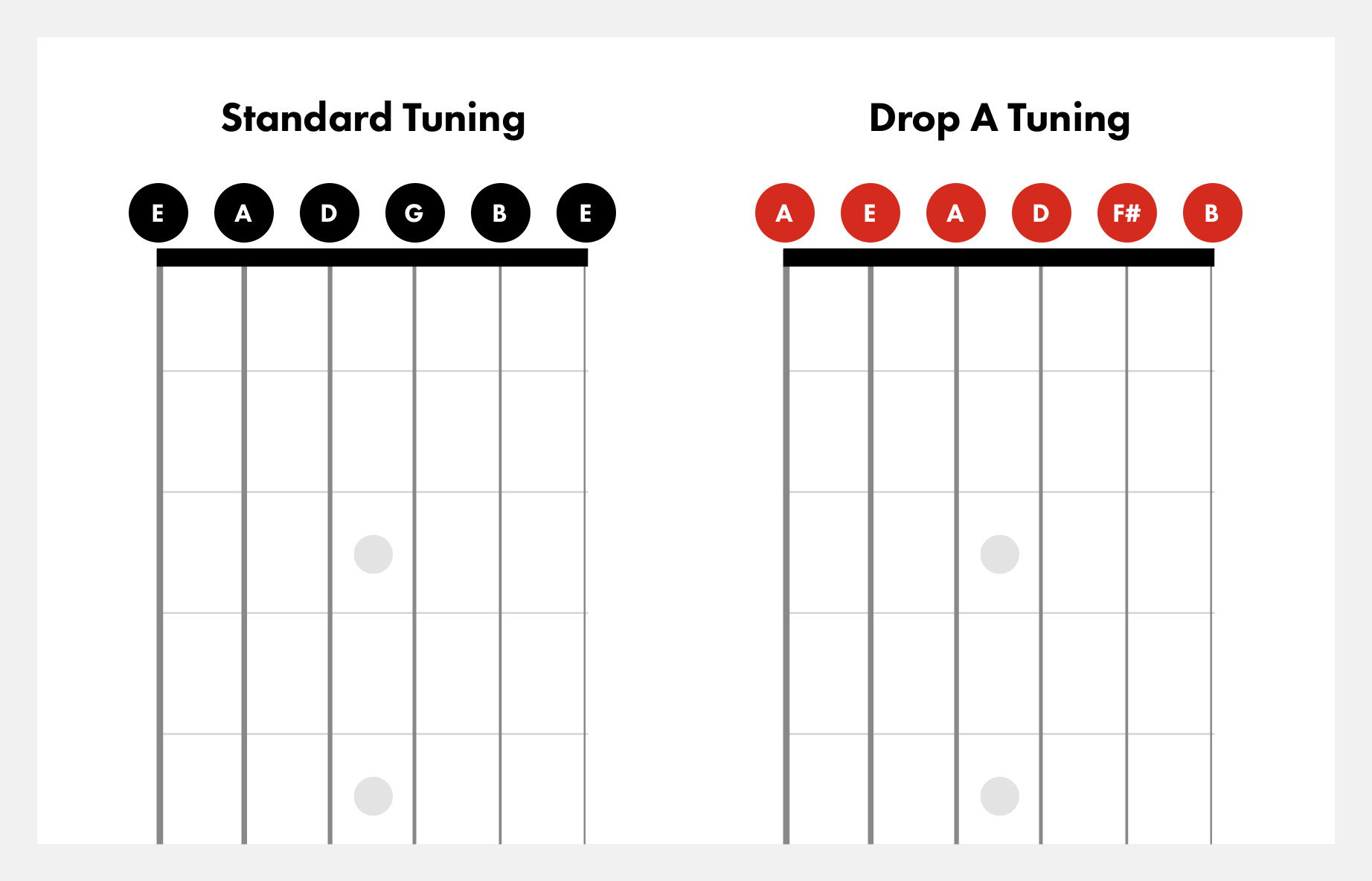 It’s important to note that drop A tuning is rather extreme for a six-string guitar. As a result, to ensure you’ve got the most comfort in your playback, you should consider a thicker set of strings (.012-.056 gauge). This also means that, in order to go back to playing standard tuning from Drop A, you’ll most likely need to change your strings.

If clarity and intonation becomes an issue in drop A tuning, or you hear a buzzing when played, the issue might be solved by raising the action or adjusting the truss rod.

Now that you know a little bit about the difference between standard tuning and drop A tuning, here’s how to tune a guitar to drop A: Start by tuning your low E string down a 4th, and then one additional step down.

-- Next, tune strings 5-1 down a perfect 4th from standard tuning. Keep plucking the strings until you hear the correct notes.
-- Pro tip: You can use the Fender Online guitar tuner to help you tune your guitar to the correct note. Use either the Electric Guitar Online Guitar Tuner or the Acoustic Guitar Online Tuner. You can adjust the tuner settings to tune specifically to Drop A and other alternate tunings. You can also download the Tune app for your phone.

Why Learn Drop A Tuning?

Tuning your guitar to drop A lets you extend its rage a fourth step lower. Many drop tunings make it easier for players to effortlessly change power chords in the lower register. This also makes it easier for singers with traditionally lower vocals to hit the correct notes. Chords that were traditionally harder to reach in standard tuning are more accessible in drop tuning.

Songs That Use Drop A Tuning

Drop A tuning is primarily found in the heavy metal / hard rock musical genres. Let’s cover a few examples of songs by genre that use Drop A tuning and how it sets the tone for each song.

Muse are no strangers to some heavy yet catchy rock anthems, and “Citizen Erased” from the album Origin of Symmetry is no exception. Matt Bellamy’s passionate Thom Yorke-inspired vocals bleed and blend incredibly well with the ultra-heavy drop A tuning guitar on this track. Is it too heavy … or not heavy enough? You decide.

Slipknot, like Korn, are practically the grandfathers of nu metal, so it makes perfect sense that the mask-rocking, nine-piece rages hard in drop A in their music, particularly in the track “Psychosocial.” The heavy gruff-enthused verses juxtaposed by the melodic chorus show the full range of what drop A can achieve.

Besides high-pitched falsetto and huge hair, Coheed and Cambria are notorious for their catchy harmonies and near pop-inspired melodies backed by hard-hitting metal riffs. In the song “Gravity’s Union,” Coheed and Cambria tap into drop A tuning to add an even heavier punch to their already aggressive sound.

With so many tuning styles and genres, mastering the guitar can be challenging. But, it’s important to branch out to the lighter and darker side of tone when learning the guitar, so you can become a well-rounded musician. With enough practice and drive to diversify your chops, you’ll develop an ear for all sorts of tunings, styles, and tones that will make you a genre-defying guitarist. Learn more with a free trial of Fender Play.