How to Play the D minor Chord on Ukulele

This minor chord is a major ukulele essential.

This lesson will break down the notes that build a D minor chord on the ukulele (often styled “Dm”), the various ways to play it, and introduce you to songs that use the D minor chord.

Lesson: How to Play a D Minor Chord

These three notes make up the D minor chord on ukulele:

This chord is built off of the D minor scale -- D, E, F, G, A, B♭, and C. This chord uses the first, minor third, and fifth notes of the scale, a formation called a minor triad formula. D, F, and A are all natural notes, notes without sharps or flats.

Don’t be surprised if you feel the D minor chord on ukulele sounds a bit sad. Historically, classical music composers felt that D minor was the most melancholy sounding of all the chords and keys.

How Do You Play a D Minor Chord on a Ukulele?

This next section will show you several ways to play the D minor chord on ukulele with chord charts and step-by-step instructions. These will both indicate where to place your fingers on the fretboard and which strings you’ll strum.

First things first: Learning the four open notes on ukulele, i.e. the notes each ukulele string should be tuned to. Memorizing these will help you learn to read the following chord charts:

Unlike the guitar, where strings are in a descending order, the lowest-toned string on a ukulele is actually the third string.

Next, we’ll review the notations and format of the chord charts. Each diagram will illustrate both ukulele fretboard and strings, with numbers indicating which finger you position on each fret, and an X or O to tell you which strings you will mute or keep open.

Memorize this key along with your open ukulele notes: 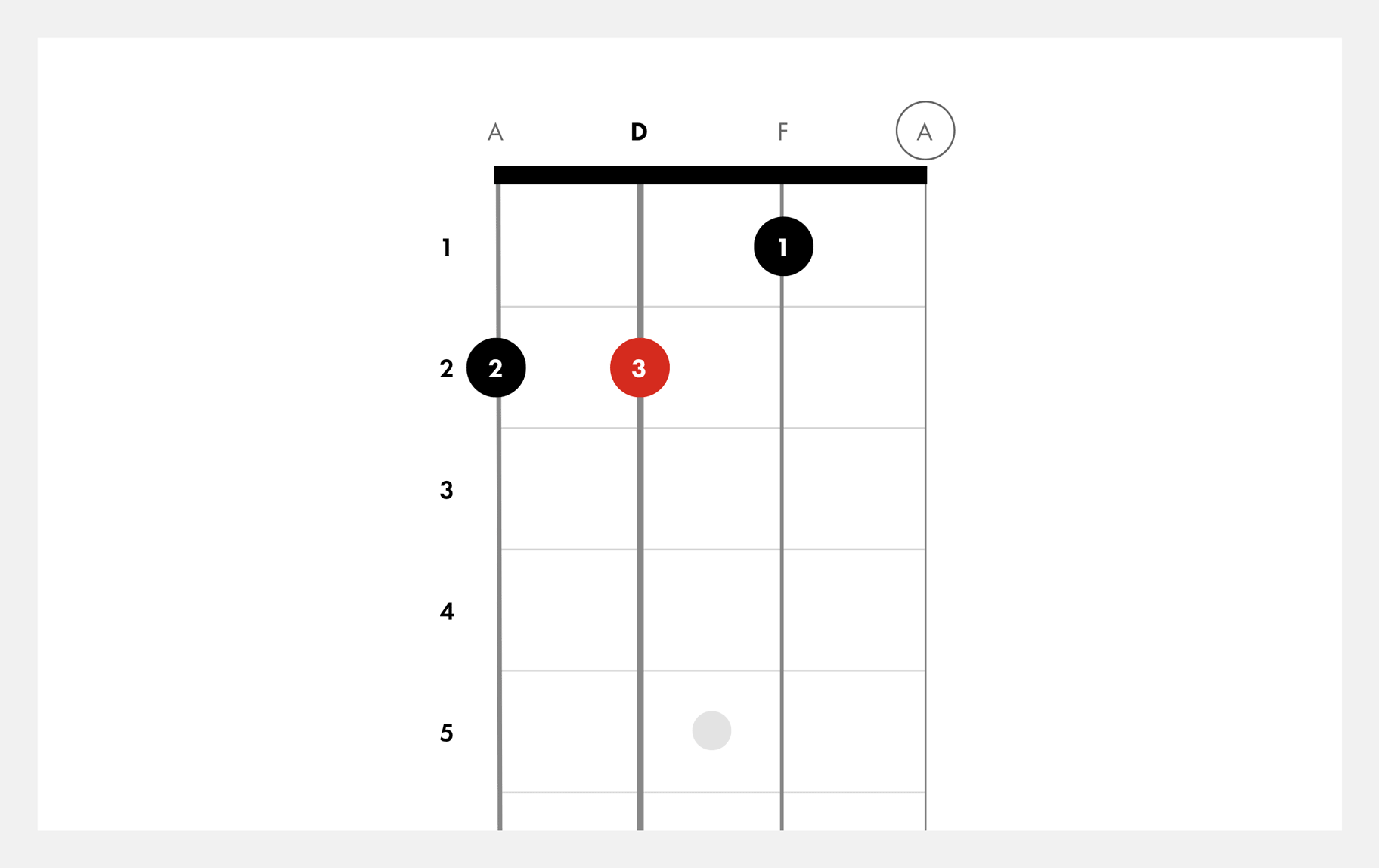 Strum all four strings and you have your D minor open position chord!

The second version of the Dm chord on ukulele we’ll learn begins on the 5th fret of your instrument. This chord will yield a higher tone than the open position we just showed you.

This position uses what we call a barre chord -- you bar your finger across the same fret, holding several strings down at once.

To play the D minor chord on ukulele in the 5th position, start by barring your index finger (1) across the 5th fret of the A, E, and C strings. Then place your ring finger (3) on the G string on the 7th fret. 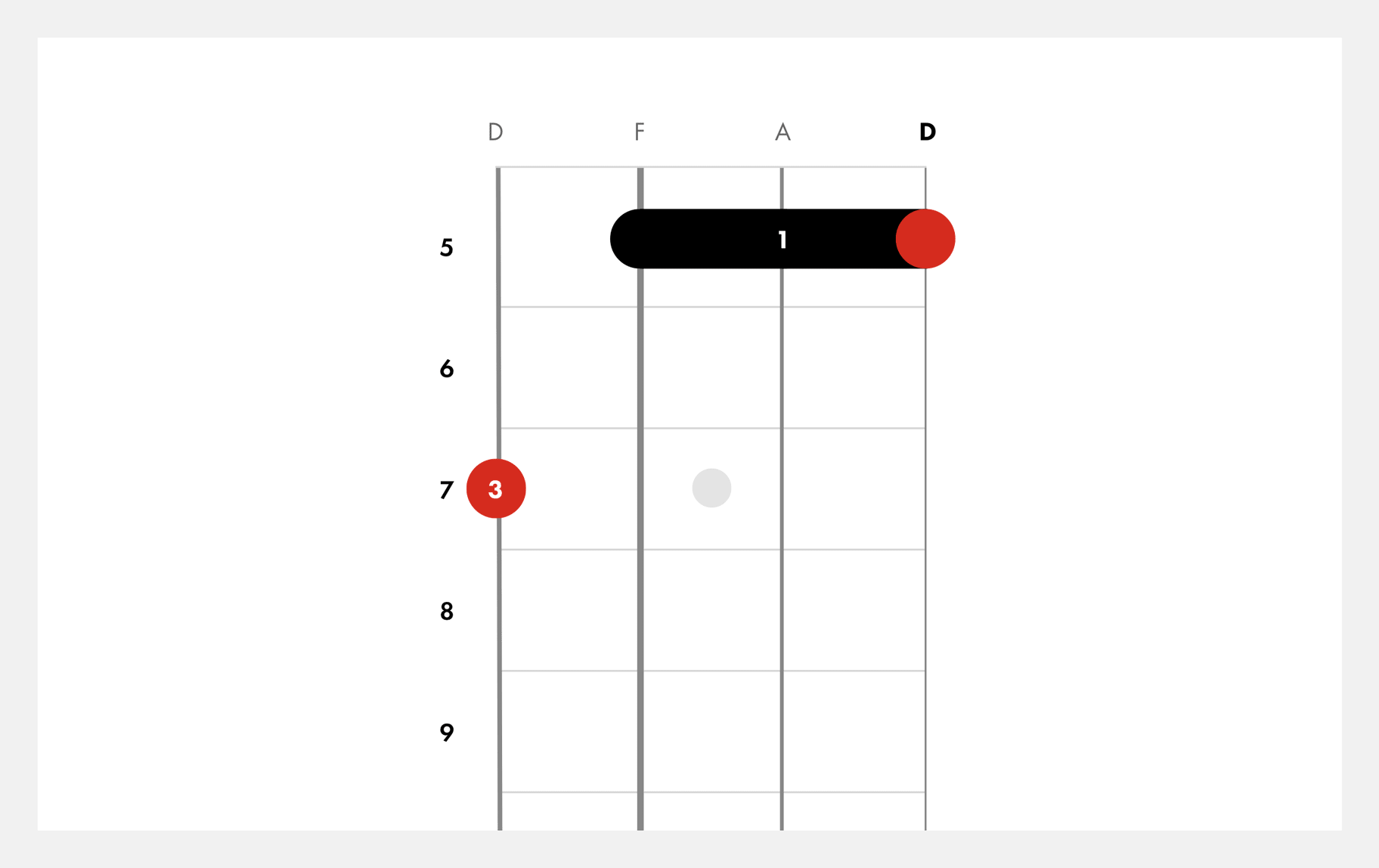 Strum all four strings together to hear the chord ring out.

Songs That Use the D Minor Chord on Ukulele

D minor plays a role in the intro, verses, and bridge of “So Much More Than This” by Grace VanderWaal. Played in a syncopated, plucking rhythm with the C chord, F chord, and the B♭ chord, D minor begins the energetic chord progression while Grace VanderWaal sings in her trademark husky voice. Not only good for practicing the D minor chord on ukulele, “So Much More Than This” is an opportunity to perfect techniques like string muting and syncopated strumming.

Like “So Much More Than This,” D minor is also seen in the verses of “Stressed Out” by Twenty One Pilots. You’ll start off first with the main progression -- F major, D minor, and A minor -- then move onto a verse chord progression composed of A minor, D minor, C major, and G major. The sorrowful D minor chord turns powerful when played in the syncopated, up stroke pattern in “Stressed Out.”

Now time for something different. The D minor chord adds to the sultriness of Peggy Lee’s 1960 hit “Fever.” This song has just one main chord progression -- A minor, C major, D minor, and E dominant seventh -- but D minor is omitted in the tag (aka the ending).

Mastering the various ways to play the D minor chord on ukulele takes practice. The more you play, the quicker your fingers will memorize the correct positionings. Once you get the D minor chord down pat, you can move onto other ukulele chords like the E major or F minor chord.

Sign up for a free trial with Fender Play to get tips for perfecting your technique, learning more chords, and playing them in songs you love.