You’ve heard this unique instrument, even if you don’t know it. 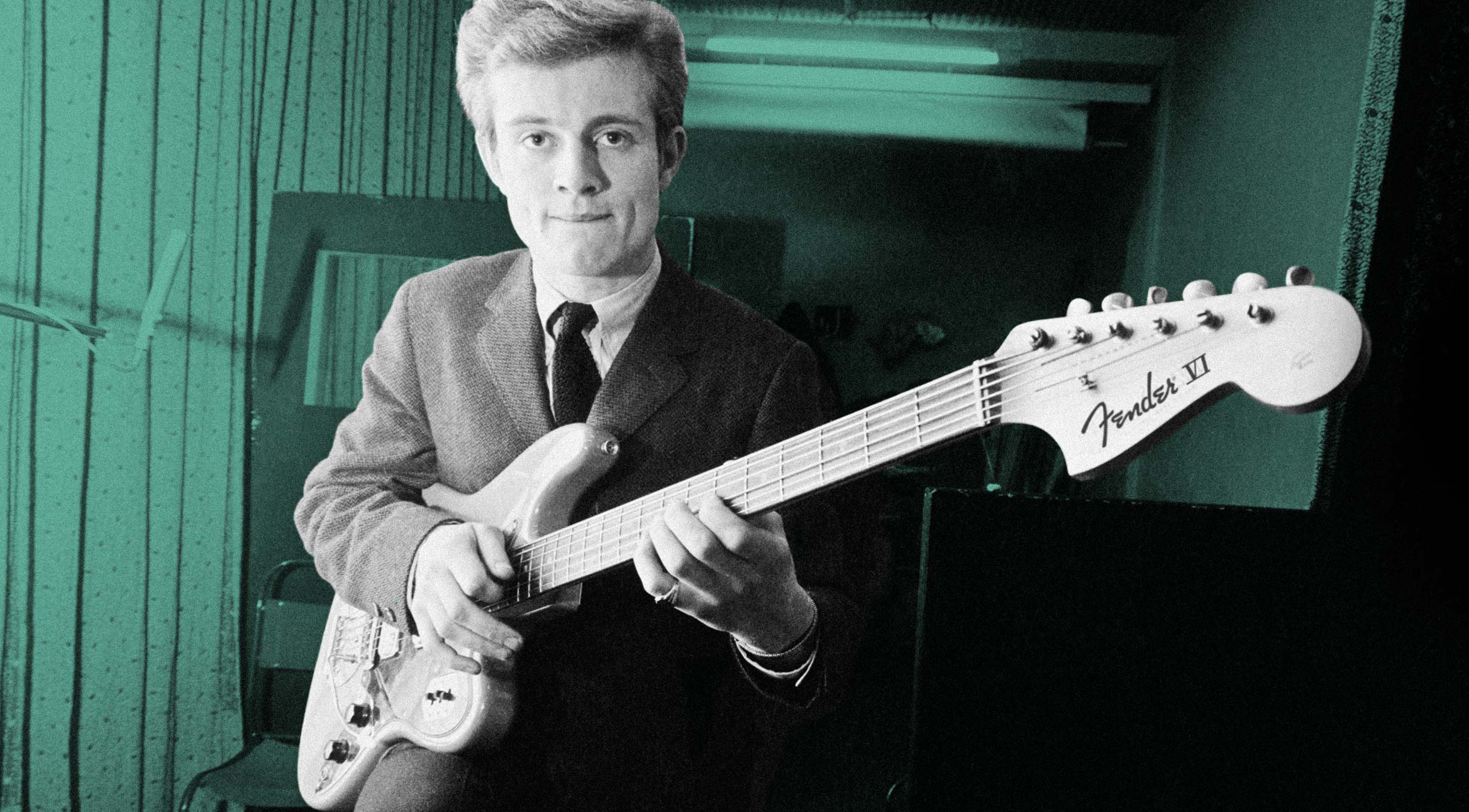 If the Bass VI is new to you, the sound isn’t.

The Bass VI was introduced in 1961 as a six-string bass (the 1961 Fender catalog referred to it simply as the “New six-string Bass Guitar”) and it occupies its own special ground somewhere between a guitar and a bass.

But, unlike a baritone guitar, which is often tuned a perfect fifth (ADGCEA), a diminished fifth (B♭E♭A♭D♭FB♭) or a perfect fourth (BEADF♯B) lower than a guitar, the Bass VI was emphatically offered as a bass and was tuned EADGBE like a guitar, but an octave lower and strung with heavy-gauge wound strings.

The first master of the instrument was Jet Harris, former bassist with surf group the Shadows, who went on to record two hits in 1962 using the Bass VI-“Besame Mucho” and the “Main Title Theme” from The Man with the Golden Arm.

Jack Bruce regularly used one during Cream's early years and John Lennon and George Harrison both used one on multiple Beatles songs. Joe Perry of Aerosmith using a Bass VI to lay down the swaggering riff that powers “Back in the Saddle” in 1976, but the rumble of the Bass VI was quit for most of the 1970s.

The Bass VI found a new voice in the 1980s thanks to Robert Smith of the Cure and Steve Kilbey of the Church. Smith especially put the Bass VI through its paces and his intriguing work with the curious instrument figures prominently on classics like 1989's Disintegration.

The Bass VI has a bit of a split personality. It is perhaps best described as an elaborate cross between a Jazz Bass and a Jaguar guitar (which debuted in 1962, a year after the Bass VI), with a guitarist-friendly 30” scale (the standard length for short-scale bass guitars) and a Jazzmaster/Jaguar-like tremolo bridge/tailpiece assembly.

It has a sleek and unmistakably Fender-y offset body, with a narrow 21-fret neck that made for tight string spacing that appealed more to guitarists than bassists. It has three single-coil pickups with smooth chrome mounting rings, with controls resembling that of the subsequent Jaguar guitar: a single volume and single tone control on the chrome input jack plate, and three pickup on/off slider switches on a hexagonal chrome plate on the stubby lower horn (one for each pickup). It originally came in a three-color-sunburst finish on its 1961 introduction, with custom color finishes available in later years. Interestingly, the headstock logo said “Fender IV” in gold (not “Fender Bass VI,” as might be supposed), with “Electric Bass Guitar” in small black all-caps letters just below.

After the Jaguar guitar appeared, the Bass VI was modified with some of that guitar’s elements, most notably re-designed pickups with notched chrome rings, and a fourth slider switch that offered a deeper tone (often called the “strangle” switch), and foam rubber string mutes. It received fingerboard binding in late 1965 and block inlays in 1966. A polyester finish replaced nitrocellulose lacquer in 1968, which is also when the headstock logo changed from gold to black.

In hindsight, some attributed this to the notion that its heavy strings but narrow neck spacing made it “too bass” for guitarists and “too guitar” for bassists. It didn’t lend itself to strumming; rather, it worked best for single-note passages.

“I played it with a pick, which I do not normally do,” said Steve Kilbey, longtime bassist/vocalist/songwriter for Australian rock band the Church. “I found I could not play it with my fingers—the strings are so close. But it definitely had a sound of its own. I loved that you could tremolo deep notes, and I loved the precise sound of it. The six was like a sports car or something. It wasn’t for all conditions, but for some things it was magic.”

The relative few who are aware of the Bass VI today often seem to think of it as a short-lived and seldom-seen mid-’60s instrument. Not so.

For starters, it was an early 1960s instrument. Certainly, it did keep a low profile, so to speak, in the shadows of its more conventional brothers, the Precision Bass and Jazz Bass and the Telecaster, Stratocaster, Jazzmaster and Jaguar guitars. It did, in fact, spend most of the 1960s and half the 1970s in the lineup with those instruments, enjoying a 14-year original run that lasted from 1961 to 1975.

There might be more substance to the “seldom-seen” notion, because despite the Bass VI’s durability, Fender never manufactured it in vast numbers. Nonetheless, the Bass VI has seen action in each decade of its existence, and it has been found in high-profile hands all along; from Brit rock royalty of the 1960s and hard rock heroes of the ’70s to alt-rockers and iconoclasts of the ’80s and ’90s and garage-indie players of today.

In 1962 Jet Harris (formerly of surf quartet the Shadows) had two hits (“Besame Mucho” and the “Main Title Theme” from The Man with the Golden Arm) using the Bass VI. Later in the decade Jack Bruce of Cream would use one to record much of 1966's Fresh Cream. John Lennon is known to have used one to record “Helter Skelter”, “Back in the U.S.S.R.”, "Rocky Raccoon” and “Dig It”, while George Harrison plugged one in for “Honey Pie” and “Birthday”.

With the exception of Joe Perry of Aerosmith using a Bass VI to lay down the swaggering riff that powers “Back in the Saddle” in 1976, the curious instrument was largely quiet through the disco years. But thanks to Robert Smith of the Cure and Steve Kilbey of the Church, the Bass VI found a new voice in the 1980s.

Smith first put the Bass VI to work on the Cure’s third album, Faith (1981), and continued to use it sporadically on mid-’80s albums such as The Head on the Door and Kiss Me, Kiss Me, Kiss Me. But Smith’s intriguing work with the curious instrument figures prominently on later albums Disintegration (1989), Wish (1992), Wild Mood Swings (1996), Bloodflowers (2000) and 4:13 Dream (2008). Periodically in-and-out Cure guitarist Porl Thompson also occasionally played it, and Perry Bamonte played a Bass VI extensively during his stint with the band from 1990 to 2005.

A reissue model of the Bass VI didn’t appear until 20 years after its original production run ended. The Japanese-made Reissue Fender Bass VI of 1995 was a largely accurate recreation of the four-switch model of 1962. It was available through 1998.

Another Japanese model, the Jaguar Bass VI Custom, appeared in 2004. A special edition instrument, it had more overtly Jaguar-like features such as two Jaguar-style pickups with on/off slider switches, dual tone circuits and controls (“lead” and “rhythm”), and an Adjusto-Matic bridge with an anchored tailpiece. Even its 28.5-inch scale length was more guitar-like. The model was discontinued in 2007.

The Fender Custom Shop went all out in 2006 with the most faithful recreation of the original instrument to date, the limited edition ’64 Bass VI. It featured a quartersawn maple neck, a reverse-wound/reverse-polarity middle pickup and a “bleached” three-color sunburst finish. The model was offered through 2008.

Which brings us to the most recent versions of the Bass VI. As part of Fender’s acclaimed Pawn Shop series of imaginatively esoteric instruments that “never were but could have been,” a version of the instrument appeared in early 2013. While the Pawn Shop Bass VI mirrored its original ancestor closely for the most part, it did feature a few major design updates—a pair of high-output Special Design Hot Jaguar single-coil neck and middle pickups, a powerful JZHB humbucking bridge pickup, and a Stratocaster-style five-way blade pickup switch in place of the barrage of slider switches on the upper bout. The Pawn Shop Series Bass VI was discontunued in 2014.

The Bass VI has thus emerged once again from the pages of Fender history to put its distinctive stamp on contemporary music and deliver its unmistakable sound to a new generation of players eager to have authentic sounds at their disposal.