Indispensable. Undeniable. The Legacy of the Champ

How the small but mighty Champ has reigned supreme for nearly 70 years.

Few amps have been in the Fender family longer or in more varied forms than the venerable Champ. Small but mighty, it has delighted, inspired and surprised guitarists since 1948 as an indispensable practice amp and prized recording amp, which means that for well more than half a century now, nothing beats a Champ.

Need proof? One of the most notable artists to rely on the Champ is Eric Clapton.

A tweed Champ was Clapton’s main studio amp for 1970 Derek and the Dominos masterpiece Layla and Other Assorted Love Songs and for acclaimed 1974 solo album 461 Ocean Boulevard. When you hear “Layla,” “Bell Bottom Blues” and “I Shot the Sheriff,” you’re hearing an original-era Champ. And in 2011, Fender honored that relationship with Clapton’s signature tweed tube EC Vibro Champ.

To this day, the Champ continues it’s long run of popularity, especially with the tweed '57 Custom Champ.

The Champ storied history began in 1948 as a 4-watt amp with a single 8-inch speaker in the form of the original Champion 800. It was soon replaced by the even-smaller Champion 600 a year later. While both of these early versions were tweed, the Champ was overhauled in 1964 in the “blackface” style with a black Tolex covering.

As with the rest of Fender’s amp lineup, the Champ and Vibro Champ were outfitted with the “silverface” look in 1968, and that existed until 1982, a year thtat birthed the Champ II with 18 watts of power, a 10-inch speaker and newly designed circuitry.

Over the years, the Champ has gone through several other iterations, from tube to solid-state, from tweed to Tolex, but it consistently remained a key piece of gear for casual players and professional artists alike. 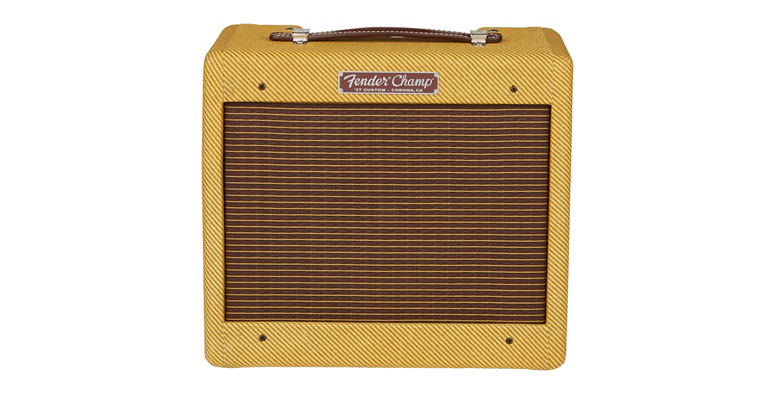 The first in the long-running Champ line, the original Champion 800 was a 4-watt amp with a single 8” speaker, three tubes, and an angled rear control panel with two inputs and a single volume control, all in a diminutive “TV-front” pine cabinet covered in greenish tweed linen adorned with a leather handle and Fender-logo nameplate.

It wasn’t around long. The even-smaller Champion 600 replaced the 800 in mid-1949, with identical circuitry but a smaller 6-inch speaker and two-tone brown and white textured vinyl covering. Like most Fender amps of the time, the Champion 600’s TV-front designed changed to a new tweed-covered “wide-panel” style in 1953; earlier versions still said “600” on the control plate; later ones said “Champ-Amp.” The “narrow-panel” style was adopted in 1955, with the control panel moved to the top, new grille cloth and a substantial circuitry redesign that would endure mostly unchanged for a decade (a 12AX7 preamp tube and short-lived high-voltage filter section choke). A larger cabinet and 8” speaker were adopted in 1956, by which time the model was known simply as the Champ. Lasting into the mid-1960s, this version would be the last of the original-era Fender tweed amps.

Fender overhauled the Champ by fall 1964 in the “blackface” style—black Tolex covering and black front-mounted control panel with separate bass and treble controls (although a very few transitional models were made in which the blackface style was applied to the last of the older top-panel cabinets). The tube layout remained the same. 1964 also saw the introduction of model with built-in tremolo called the Vibro Champ. Along with the rest of the Fender amp lineup, the Champ and Vibro Champ adopted the “silverface” style in 1968, and both existed in this form until 1982, when they were given a new blackface control panel shortly before being discontinued.

A new and very different Champ then appeared—1982’s Champ II boasted a 10-inch speaker, all-new circuitry including a master volume and bright switch, and an enormous 18 watts of power from dual 6V6 power tubes (all previous Champs never pumped more than 6 watts). A souped-up version with reverb and a lead channel, the Super Champ, also appeared in 1982, as did the special-edition Super Champ Deluxe, which featured an Electro-Voice speaker, solid oak cabinet, special grille cloth and lacquer finish. None of the 1982 Champ models survived long, however; the Champ II lasted only a year and the Super Champ disappeared in 1986 after CBS sold Fender in 1985.

When a new Fender corporation emerged from CBS rule in the mid 1980s, the first small amp that came out was yet another Champ, this time in a red-knobbed 12-watt version with a 12-inch speaker called, fittingly, the Champ 12. Introduced in 1986, it updated the model with tape inputs, a line out, a headphone jack, and several custom cosmetic treatments including red, white, gray and even snakeskin.

The Champ 12 had a fairly successful run until 1992, when it was replaced with the short-lived Champ 25 and Champ 25SE—the first Champ models to feature hybrid tube/solid-state circuitry. These upped the power even more—to 25 watts—with a single 12-inch speaker, tube output sections, solid-state preamps, dual channels with their own tone controls, and completely redesigned cosmetics with black knobs, black grille cloth and plastic corners. The “SE” model had tape inputs, a line out and master volume; the other didn’t. As authors John Teagle and John Sprung note in Fender Amps: The First Fifty Years, “These were really too big and complex to be considered Champs.” Both were discontinued in 1994 after barely two years.

Fender upped the solid-state power yet again in 1999 by replacing the Champion 110 with the 30-watt 1×10-inch Champion 30; itself replaced in 2002 with a digital-effect-equipped variant, the Champion 30 DSP, which lasted until 2004. Squier started putting its solid-state 15-watt 1×8-inch Champ 15 into its popular instrument packs in 1999.

When Fender went digital in the early 2000s with its popular Cyber series amps, yet another iteration of the Champ appeared in the form of the Cyber-Champ. At 65 watts, it featured a wealth of digital wizardry including reverb, modulation and delay effects; 21 presets; MIDI compatibility and more. It remained in the line through 2006.

Apart from the Cyber-Champ, the Champion 30 DSP evolved into 2004’s Champion 300, another solid-state 30-watt 1×10-inch model with dual channels and a wealth of effects.

A modern Champ renaissance came in 2007 with three new models and a return to tube technology. The Champion 300 gave way that year to the hybrid Super Champ XD, a 15-watt 1×10-inch amp that combined the return of a tube power amp with a wealth of digital amp models, effects and other features. Concurrently, Fender released the 5-watt 1×8-inch Vibro Champ XD, which also combined a low-power tube amp with versatile digital effects. Finally, and in a charming and great-sounding nod to the distant past, Fender introduced a new 5-watt Champion 600 model that expertly mimicked its 1949 ancestor right down to the two-tone brown and white textured vinyl covering. A spot-on recreation, the only differences it offered were improvements—a higher-gain preamp circuit, high- and low-gain inputs and an internal speaker output jack that enabled use of an larger speaker cabinet.

In keeping with the vintage theme, the ’57 Champ was released in 2009. A faithful tweed-covered, hand-wired, 5-watt recreation of its late-’50s ancestor, it won much acclaim during its two-year run through 2011.

When Fender introduced its very first artist-model amps in 2011, yet another Champ model was among them. The EC Series amps bearing the name and spec preferences of Eric Clapton consisted of three tweed tube amps, one of which was the EC Vibro-Champ.

Based on a late-’50s Fender Champ model 5F1 (about 5 watts), the EC Vibro-Champ is handmade in the United States, with high-end features, vintage styling some interesting mods. Most notably, Clapton himself specified that it have a ’50s-era output tube bias tremolo circuit (with speed control), and a switchable power attenuator to reduce speaker output. It has hand-wired all-tube circuitry on an eyelet board with premium components, a Schumacher custom transformer, high- and low-gain inputs, a single 8” Weber® Signature speaker, an internal speaker disconnect that allows use of an external 4-ohm speaker enclosure, a finger-joined solid-pine enclosure with lacquered tweed covering, vintage-style brown/gold grille cloth and leather strap handle, and, in the most outwardly visible personal touch, an “EC Series” badge at front lower right and Clapton’s signature on the control panel. It won positive reviews.

The Super Champ XD, Vibro Champ XD and Champion 600 reissue all said goodbye in 2011 and 2012 as the latest amps in the ongoing evolution of the Champion appeared. These were 2012’s combo Super Champ X2, Super Champ X2 HD and SC112 Enclosure; the latter two marking the first time a Champ model was presented in head/cabinet form. Both are 15-watt dual-channel amps with a wide selection of amp voices, digital effects, computer connectivity and other features. The combo model has a single 10-inch speaker, whereas the SC112 Enclosure houses a 12-inch speaker.

Undoubtedly, the evolution of the Champ will continue as new generations of guitarists discover and re-discover the simple joys of small low-power tube amps (even as solid-state and digital technology remain in the picture). And it remains just as true in the 2000s as it did in the late 1940s and every decade since: Nothing beats a Champ.