How a Treble-Bleed Circuit Can Affect Your Tone

Standard in all American Professional Series guitars, this simple mod can help your tone at all volumes.

A lot of factors contribute to great guitar tone—the way you play, your fingers, your amp, your intonation, your strings. The good news is that you can endlessly tweak all those things and even add effects to sculpt your sound.

But have you ever noticed that when your volume knob is turned up to 10 your tone isn’t the same as when you roll the volume back to, say, the halfway mark? When the volume is “dimed”—that’s guitar speak for cranking the volume to 10—on a standard guitar, the amp gets the full signal from your pickup, providing the well-rounded tone that will give you the warm fuzzies.

When you turn the volume pot (potentiometer) down, you gradually lose the treble part of the signal, as the guitar will sound less and less bright and muddier the further you go. This is due to the relation between the pickup and the potentiometer’s resistance—how a device reduces the electric current flow through it—and capacitance—the ability to store electrical energy—(in addition to guitar cable’s capacitance).

Basically, resistance and capacitance are inversely related. So when the volume is up, the only frequencies being blocked from getting through to pedals and amps are too high to have much of an effect on the ear. Turning the volume down raises the resistance, so the frequencies that are cut off dip are the high ends that you can hear—hence the denser tone.

While some guitarists like when this occurs, it’s safe to say most people want to solve this problem. 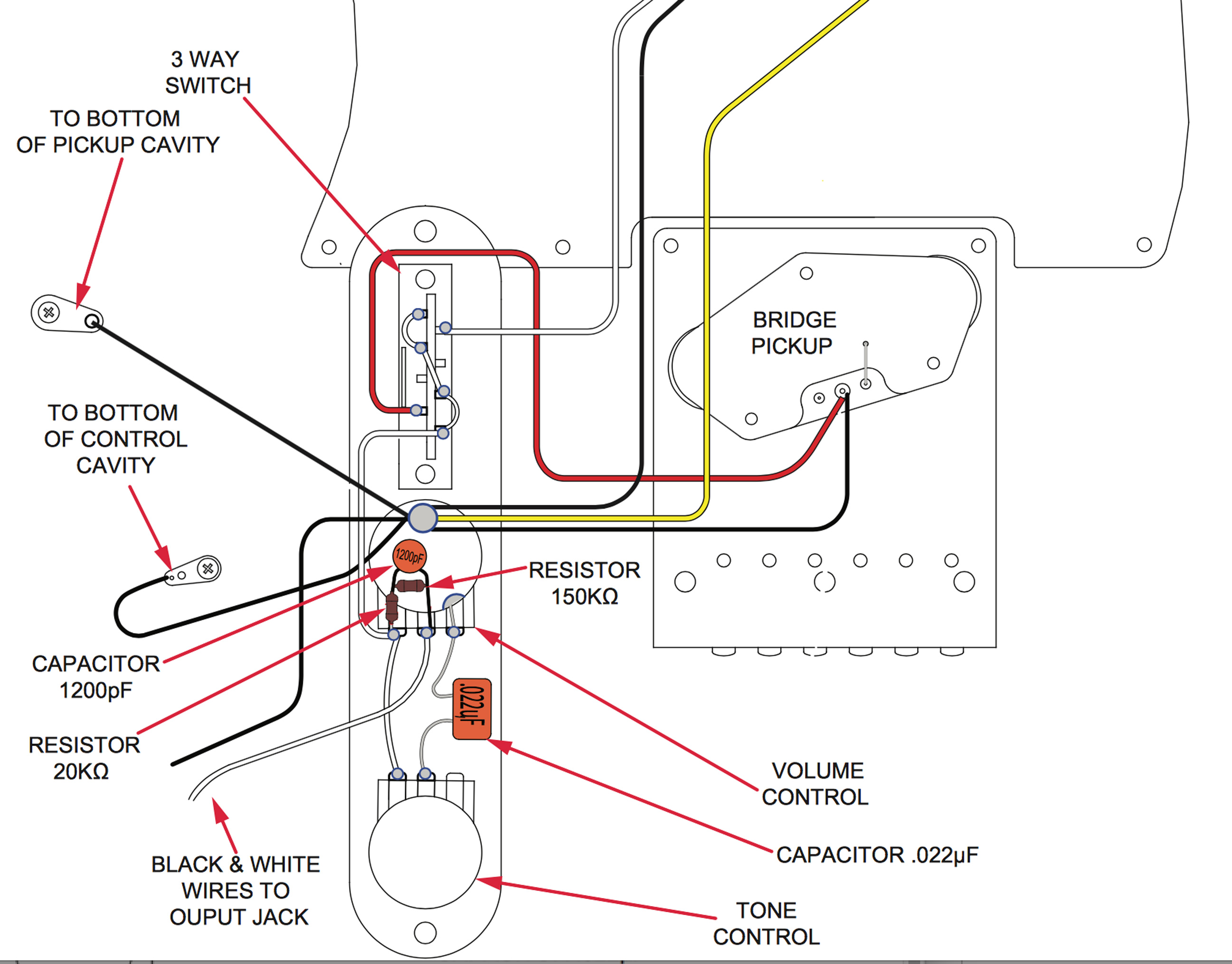 __The capacitator coupled with a resistor in parallel and a resistor in series on the American Professional Telecaster treble-bleed circuit.

This might sound pretty technical—and it is—but the solution is actually fairly simple. A treble-bleed (high-pass) circuit allows the highs to “bleed” (or pass) through the volume pot even as it is turned down.

“It’s a common modification people have been doing for a while,” said Jonathan Parrish, a Fender engineer who designed the treble-bleed circuits in the American Professional Series guitars. “It’s kind of fascinating, and there are a few ways you can address the situation.”

A basic high-pass circuit consists of a capacitor that is soldered to the center and outside lugs of the volume control. Some, however, believe that just having a capacitator starts to cut off some of the bass tones as the volume is rolled down.

“What I noticed when just using the capacitator is as soon as you roll that volume down one notch and go to 90 percent, you’re almost dumping the lows too much,” said Parrish. “That’s the perception you get. When you roll back just a tap, your lows have gone away and your sitting in this high range frequency."

To bring back some of those lost lows, you could also add a resistor to the circuit along with the capacitator. In that vein, Fender actually created the Tone Saver, an R/C network housed inside a single enclosure that makes it simple to add the resistor and capacitator to the volume pot. Luckily, anyone can pick up one of them and install it themselves or have a seasoned technician apply the mod.

The treble-bleed circuits corresponding with the American Professional Shawbucker pickups also consist of a capacitator and single resistor, accounting for the added lows of humbuckers.

“The Shawbuckers are thicker,” Parrish said. “While rolling down on the volume, the lows come up, so I wanted to push them back down a little to level out the sound.”

The treble-bleed circuits included on the American Professional Stratocaster, Telecaster, Jaguar and Jazzmaster single-coil pickups take that one step further.

In developing that standard feature, Parrish found that adding one resistor to the capacitator in series and another in parallel would let a fuller tone shine through at all volumes.

“What that does is creates a constant voltage drop across the circuit,” he said. “By adding that one resistor, I can take the highs and drop them down a little bit more. And by voicing them to each pickup combination on each guitar, they’re all a specific fit and sound really musical.”

Again, there are a ton of ways you can manipulate your tone, some more obvious than others.

The treble-bleed circuit is one of those hidden ones, but this small modification concealed under your pickguard can offer clarity no matter how loud—or quiet—you want to play.