Learn how to tune your guitar to open C and start playing your favorite songs in open C tuning.

Standard tuning isn’t the only way to tune your guitar. To experiment with songwriting and make use of the entire range of the guitar, musicians will look to “alternate tunings,” which are basically any tuning that’s not in the standard E, A, D, G, B, E tuning. It might be difficult for beginners at first, but practicing alternate tunings will help enhance your knowledge of musical theory.

In this lesson, we’ll learn how to tune your guitar to open C, one of those alternate tunings. Also on the agenda: the benefits of alternate tunings and songs in open C tuning for you to play.

What is Open C Tuning?

Strumming open strings in open C tuning on guitar will sound like a C chord. Overall, the tuning creates a big, full sound. Achieving this tonality is one of the reasons why you might want to venture outside of standard tuning.

Another reason you may want to try your hand at alternate tunings like open C, is because they can allow you to experiment with more sounds and tones when writing songs. Several famous guitar players have used the open C tuning on guitar for exactly that reason and created some of the most popular songs of our time. For example “Friends” by Led Zeppelin or “A Thousand Days Before” by Soundgarden both made use of open C tuning.

Although hard rock bands have tuned their guitars to open C, it’s particularly popular with acoustic musicians due to its rich sound.

Replace your strings with thicker gauge strings. Raise the action of the guitar. The action is the space between your strings and the fretboard. If strings are lifted higher off the board, they’re less likely to hit it. Adjust your guitar’s truss rod. The truss rod is the metal rod within your guitar’s neck. There’s an opening to the truss rod at the top of your guitar neck that can be tightened or loosened with an Allen wrench.

Lesson: How to Tune Your Guitar to Open C

Open C tuning on guitar changes the tuning of all but two of the six strings. Here’s difference between standard and open C tuning: 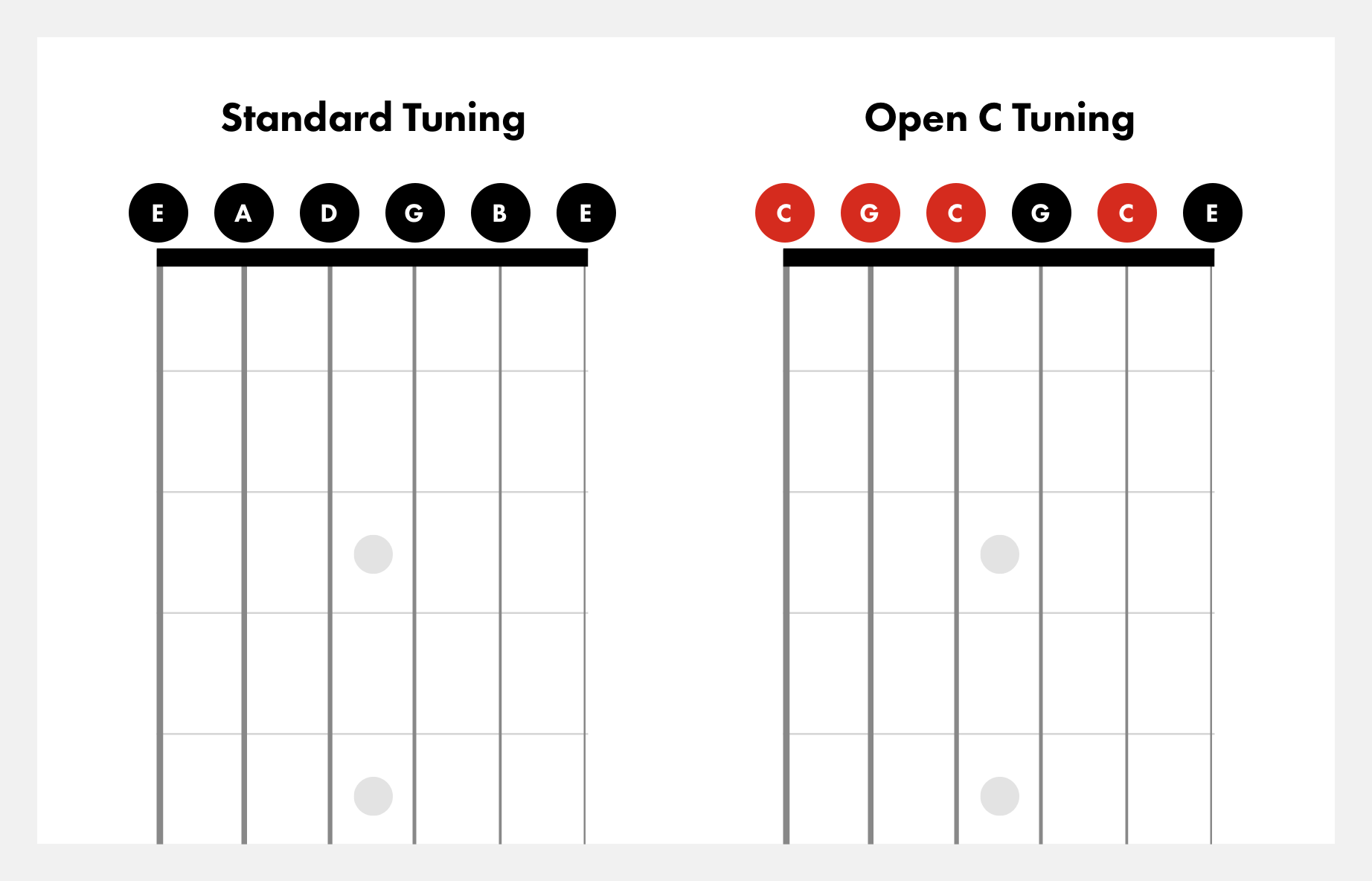 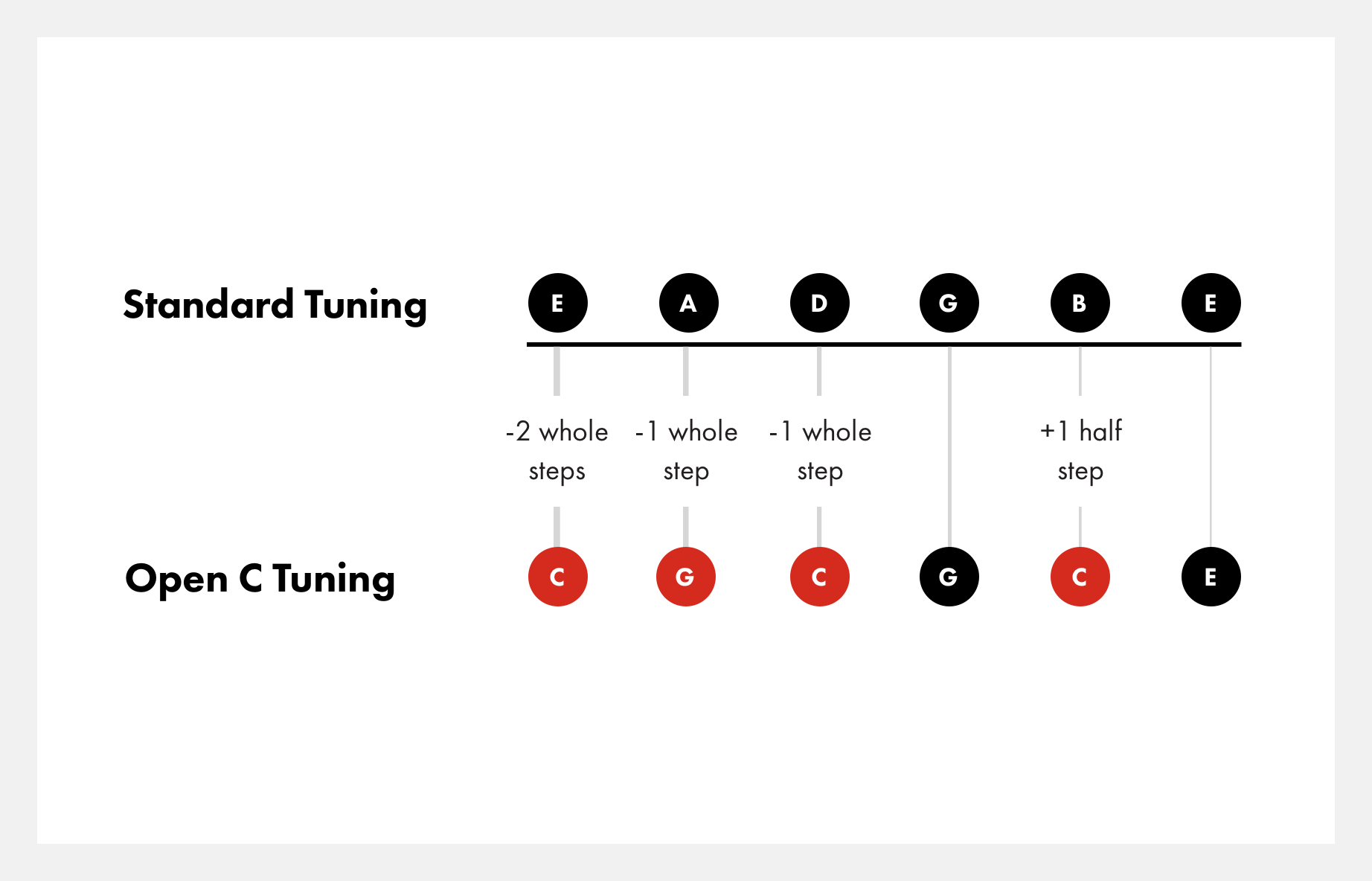 Now that you know the difference between standard and open C tuning, here’s how you tune a guitar to open C:

Start by plucking the low E string. Tune it down two whole steps by turning the tuning peg clockwise towards you. Keep plucking the string until you hear the correct note. Repeat for other strings that need tuning.-- Pro tip: You can use the Fender Online guitar tuner to help you tune your guitar to the correct note. Use either the Electric Guitar Online Guitar Tuner or the Acoustic Guitar Online Tuner. Or download the app for your phone. Both the web and app versions give you the ability to adjust your settings and tune specifically to Open C and other alternate tunings. No tuner? No problem -- tune your guitar by ear. Start by playing the note you’re trying to tune a string to on another string and try to match it. e.g. To tune your low E strings to a C, pluck the B string (5th string) but hold down the first fret -- that’ll be a C -- and adjust the tuning peg until the notes sound similar. Note that the C on the 1st string will be in a lower octave than when played on the 5th string.

Playing the chords you know on open C tuning might be hard to wrap your head around at first. Learning songs in open C tuning is a good way to teach yourself how. Here are a few to get you started:

“King of Spain” by The Tallest Man on Earth

“King of Spain” by singer-songwriter artist The Tallest Man on Earth is an example of how a simple song with simple strumming can be made more interesting with an alternate tuning. To play this song in open C tuning, you’ll also need to place a capo on the 8th fret of the guitar.

The result is an uplifting, bright sound that juxtaposes nicely with singer Kristian Matsson’s unique, raspy voice. The song employs stripped-down acoustic guitar and vocals that could have been easily forgettable, but the tonalities that Matsson is able to achieve make it an interesting listen.

“The Fear” by Ben Howard

Open C tuning brings a celebratory quality in “The Fear” by fellow singer-songwriter artist Ben Howard. This song from the Every Kingdom album makes use of open C tuning in a way that starts out quiet with simple picking and vocals. A drumbeat kicks in as the dynamics start to get louder and louder. Unlike Matsson, Howard has a smoother, wavering voice that pairs well with the fullness of the open C tuning.

Alternate tunings can be challenging whether you’re a beginner or advanced guitar player. But trying out different tunings can help you expand your musical knowledge and reveal ways to play chords or set emotional tones. Practice will help you master the open C tuning as well as other alternate tunings like open E or open A. Learn more with a free trial of Fender Play.