Learn about what to consider when buying a Strat® and watch Fender Insiders including guitarists Cory Wong and Melanie Faye play 8 popular models including the Player, Vintera '50s, and Ultra.

As Keith Richards once said, "The Strat is as sturdy and strong as a mule, yet it has the elegance of a racehorse. It's got everything you need, and that's rare to find in anything." The Stratocaster® is the quintessential electric guitar—a worldwide archetype; the basic form that leaps to mind at the very mention of the phrase "electric guitar." Years after the quote, the Strat is as popular as ever and evolved with the times. In this guide Fender Insiders will review and compare the following 8 popular series of the iconic Stratocaster®:

But first, an introduction to the Stratocaster®.

Finding The Best Stratocaster For You

There is no such thing as the perfect Stratocaster®. What thrills one set of ears may not thrill another. What one player loves about one particular guitar might be a show-stopper for someone else. That's what makes each and every Fender so unique and personal. We've put together a short guide of important considerations when selecting a Strat®. Learning about the parts of the guitar and the materials used to make them can help you find the perfect guitar for your preferences. Time to get acquainted with the basics and then browse 8 models with Fender Insiders

Anatomy of a Stratocaster

Modern Stratocaster bodies are still made of the same woods the originals were made from over 60 years ago: alder and ash. Most contemporary Strats are alder, while the Strats featured in the Deluxe range feature ash bodies.

The alder used in most Fender guitars boasts many sonic advantages. Not especially dense, it’s a lightweight, closed-pore wood that has a resonant, balanced tone brighter than other hardwoods, with a little more emphasis in the upper midrange. It imparts excellent sustain and sharp attack.

Ash can be difficult to work with. The pores must be filled before finishes are applied, and two swamp ash guitar bodies are more likely to differ from one another tonally than two bodies made of alder, which has a tighter, more consistent grain. Ash imparts articulation and presence with a great balance between brightness and warmth, and it looks great.

This is one place where each of the seven Strat models compared here differ from one another, though most are 25.5" scale with a 9.5" fingerboard radius, 22 frets and some variation on a "C"-shaped neck.

Fender offers guitars with a handful of different neck profiles, but the guitars included here feature variations on the classic "C"-shaped neck, which has a more rounded profile than the pointed "V" or flatter "U" style.

READ MORE: C-V-U? Which Neck Shape Is for You? 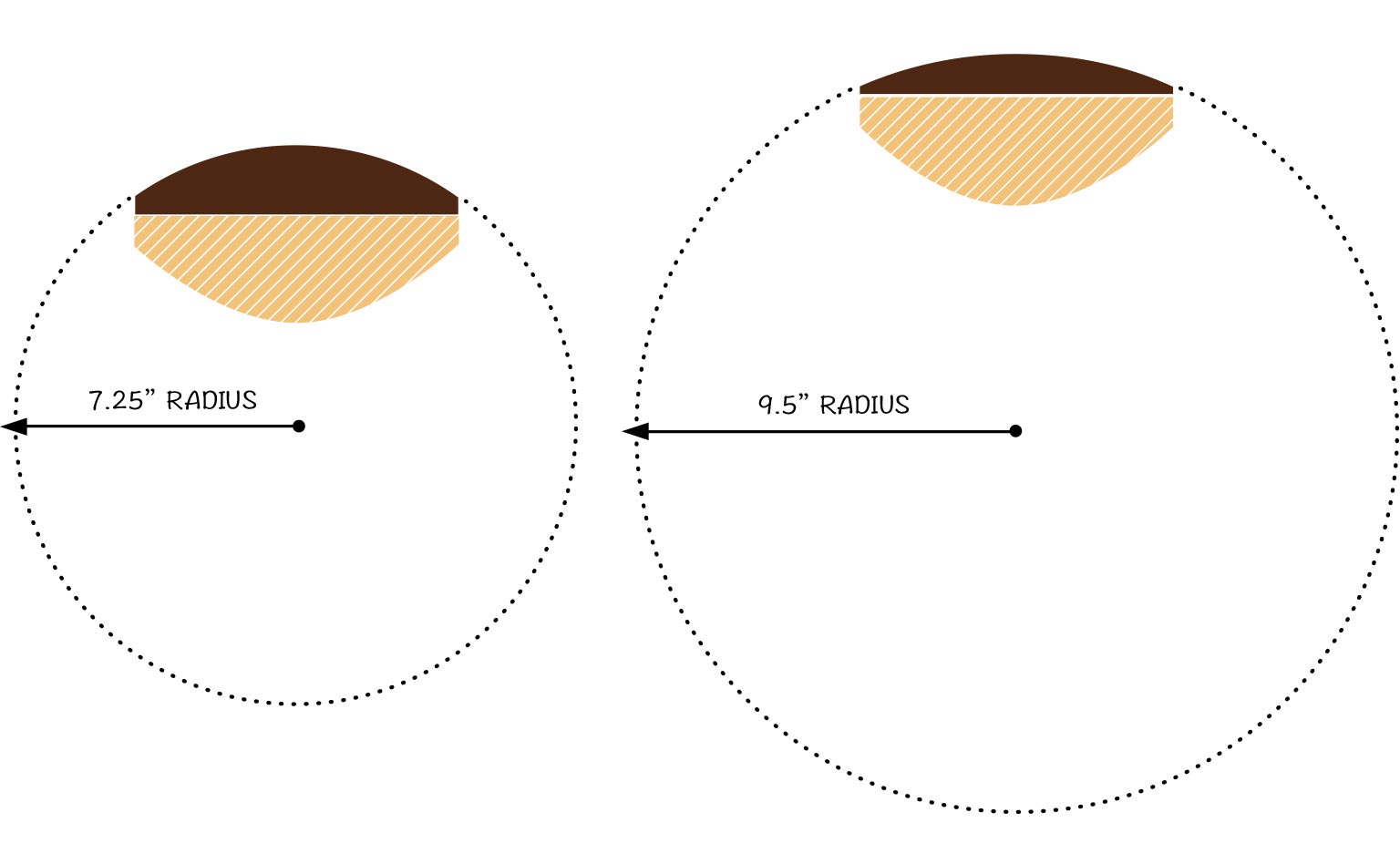 The Ultra features a 10”-14” compound radius that get flatter as you progress up the neck.

READ MORE: What Is Fingerboard Radius?

Fret size refers to the actual fret wire used to create the frets. If you like your fingers to actually touch the fingerboard when fretting the strings medium jumbo or vintage frets are likely for you. On the other hand, jumbo fret wire can provide easier playability with better sustain, tone and bending because you don’t have to press as hard to fret the strings, but your fingers probably won’t even touch the fingerboard, which could take some getting used to if you’re accustomed to smaller frets.

"How many frets are on a Stratocaster?"

Rosewood is known for being a softer, warmer tonewood. On the the other hand, Maple produces a much brighter and percussive sound.

Alone among Fender's guitars, the Stratocaster actually has two headstock options: the smaller, streamlined headstock (seen at left) and the larger, CBS-era headstocks (at right). Why? It's simple, really. The Columbia Broadcasting Company—yes, that CBS—owned Fender for two decades from early 1965 to 1985. One of CBS's first changes to Fender instrument design was the introduction of a larger headstock. Why? To accomodate a larger logo decal, of course.

If you prefer the larger headstock you can find it on the American Special and the Deluxe Strat models.

READ MORE: How the Strat Came to Have Two Heads

All Strats featured here have the classic five-way selector switch, but that's just for starters.

Each offer a unique set of pickups and some feature additional electronics to help you further find your unique tone, such as the S-1 Switch on the American Ultra and the Greasebucket tone circuitry found on the American Performer Strat®

Arguably the most important invention found on the first Strat models, the synchronized tremolo system has gone through many innovations and iterations over the years, some of those changes define the difference between the instruments compared here.

The Vintera '50s Stratocaster® comes equipped with the same 6-Saddle Vintage-Style Synchronized Tremolo found on Strats released in the '50s and '60. The American Ultra Stratocaster features a more modern take in the 2-Point "Pop-In" Tremolo Arm, which has a more stable, set-screw system than the traditional screw-in tremolo arm.

The Player Stratocaster ® is for the player looking for legendary design, all the classic features and most-of-all versatility. The Player series stratocaster is our most versatile beginner instrument because it combines a classic model with contemporary appointments including a 22-fret neck and a dedicated bridge pickup knob, giving you more control of the other pickup positions. In this Insider clip, Fender's top gear advisor John Dryer gives a detailed rundown of our most versatile beginner's Strat®.

The Player Strat® with Melanie Faye

The Vintera series 50s Stratocaster® is for someone looking for the golen era Stratocaste®sound in a brand new instrument. We've created three vintage-style pickups that capture articulate tone that make 50s single-coil pickups a favorite amongst players. Visually speaking, this guitar looks like something that would have come out of the Fender factory in the mid-50s with its 1-ply pickguard and vintage-style handware including the classic six-point synchronized tremolo.

The Yosemite pickups are voiced specifically for each instrument, so you know you are getting a one-of-a-kind experience. The three gorgeous color options, satin finished neck and 70s shape headstock gives this guitar a truly striking appearance. Under the hood, Fender's "Greasebucket" tone system allows you to cut treble without sacrificing on tone or affecting your gain.

This limited edition model is a reissue of the classic Heavy Metal Strat® Fender released in the 80s. If you are looking to shred loud and hard this is the model for you. The extremely flat 17" fretboard radius and a thin "C" neck guarantee a fast and low action perfect for speedy solos. The recessed Floyd Rose bridge will keep you in tune longer through the dive bombs and string bends. The Rubberized "F" logo knobs are the perfect homage to the original HM.

The HM Strat® with Chris Greatti on Fender Play LIVE

There's a reason its called the HM Strat - the HM stands for "Heavy Metal". And Chris Greatti (Blame Candy, Poppy, Yungblud) showed exactly why this guitar is so at home in that genre on an episode of Fender Play Live all about '80s Metal. Watch as he and Sebastien Betley shred on their HM Strats to Ratt's classic hit "Round and Round".

For those seeking the ultimates blues tone, you've come to the right place. This model is based of SRV's "Number One" Stratocaster®. This is "the number one" instrument for the number one blues guitarist of all time, the creme de la creme blues Stratocaster®. This guitar really pops aesethetically with its gold-plated hardware, engraved SRV pickguard and 3-tone sunburst.

The SRV Strat® with Dinesh Lekhraj on Fender Play LIVE

In an episode of Fender Play Live called "How to Play like Stevie Ray Vaughan", guitar expert Dinesh Lekhraj dives into the style, tone & everything else that defines the blues legend. Check out the clip below where he shows off the SRV Stratocaster in action by playing some of the classic tune "Crossfire".

This guitar is for someone that likes the original. We've captured the ethos of the 50s era Stratocaster® in this re imagining of the original golden era strats. We've included period correct details including the signature one-ply pickguard and "soft-V" neck. The Pure Vintage '59 Strat® Pickups deliver the classic rounded warm tone that 50s strats are known for with their Alnico 5 magnets nad staggered pole peices. Choose from three colors including Inca Silver.

The American Ultra series is our most premium production Stratocaster®. It's got all the appointments needed to get the job done, executed in a way that caters to the modern musician while capturing the ethos of Leo Fender's original design. Vintage pickups combined with modern wiring options provide a range of tonal possibilities further expanded by the S-1 switch which blends the neck pickup into any switch position.

Body contours, a tapered neck heel and rolled fingerboard edges make this guitar as comfortable to play as it is functional. The "Modern D" neck profile with satin finish and 10" - 14" compound radius are perfect for those looking for a "fast" neck for soloing and leads.

The Ultra is available in seven colors including Plasma Red Burst and the increasingly popular Texas Tea (which changes colors in the light).

The American Acoustasonic Series builds on the versatility and playability of the classic Stratocaster® design. The Fender and Fishman®-designed Acoustic Engine that powers the Acoustasonic provides a new collection of 7 acoustic and 3 electric inspired voices. The hollow body means this guitar sounds great plugged into an amp on stage or in your lap. The top is made of spruce, which is a common choice for acoustic guitars due to its resonance.

Choose from 5 colors including Dakota Red and 3-tone burst.

The "Mod Knob" gives you control of these 10 voices by giving you the option to switch between or blend 2 distinct models available in each of 5 positions. Here is a quick summary of the tones offered:

The American Acoustasonic Stratocaster with Molly Tuttle and Billy Strings

How Much Does A New Stratocaster Cost?

While all Fender guitars are held to an extremely high standard of quality for component parts, fit and finish, some models include advanced features that can make the cost jump.

Of the eight models featured here, the Player Stratocaster is Fender’s entry level Strat and can be had for under $700. The higher-priced models including the American Ultra HSS $1899 and the American Acoustasonic $1999 carry higher price tags but offer meticulous attention to accurate detail and premium appointments.

Features like a rosewood fingerboard or innovations like the pop-in tremolo arm, locking tuning and body contouring will also make the cost of any instrument rise.

How Much Does a Stratocaster Weigh?

That said, almost all of the Strats featured here fall somewhere between seven and nine pounds, with the majority in the meaty middle of that range. People with smaller builds may prefer an instrument on the lighter side, while a lighter guitar doesn't feel substantial enough for others.

Woe to the southpaw player. Always searching for guitars only to find that left-handed options aren't available. Lucky for the lefties Fender is paying attention, and offers a number of SSS Stratocaster options, including the Player Series Left-Handed. More left-handed guitars here.