Three were parted out to make his legendary guitar, “Blackie". What happened to the others?

In November of 1970 Eric Clapton, who the previous year had cast aside the psychedelic Gibson SG he played with Cream in favor of a Fender Stratocaster, was touring America with Derek and the Dominoes.

While on a tour stop in Nashville, the ex-Yardbirds guitarist wandered into the renown Sho-Bud music store. Clapton was shown into the back room of the shop, which was located across the alley from the historic Ryman Auditorium in downtown Nashville. It was there he came upon a rack of vintage Stratocasters, all dating from the mid-50s.

“When I was on tour with the Dominos, I went into Sho-Bud in Nashville, which had a stack of second-hand Strats in the back of the shop,” recalled Clapton to the Daily Mail in 2013. “I felt like I’d stepped into a gold mine.”

Eric Clapton appears alongside the Dominos and Carl Perkins on the Johnny Cash Show in November 1970.

As Clapton reflected in his 2007 autobiography, Clapton: The Autobiography, Stratocasters “were completely out of fashion at the time.” Thus the legendary guitarist was able to scoop up six mid-50s Strats for the unfathomably low price of about a hundred bucks each.

Clapton kept three of the guitars for himself, eventually parting them out to build "Blackie"; the famous black Stratocaster he would wield for the definitive period of his solo career. While the story of Blackie is well known, somewhat less is known about what happened to the other three Strats Clapton picked up that day in Nashville back in 1970.

It is generally known that upon returning to England, Clapton gave the other three guitars to friends as gifts. One went to Pete Townshend, another to George Harrison and a third to Steve Winwood. After that, the trail becomes somewhat murkier.

The guitar that Clapton gave to Townshend was apparently a ’57 Stratocaster. And thankfully, it seems the sunburst Strat went on to enjoy a longer lifespan than many of the other guitars Townshend got hold of in the early 1970s. In fact, it remained in the Who guitarist’s possession for decades, before eventually being sold at an Oxfam auction in May of 2000.

But the story doesn’t end there. Townshend purchased the Strat himself, together with David Bowie and Mick Jagger. The three rock legends then gifted it to UK Prime Minister Tony Blair. Blair later returned it to auction where it was sold to a private collector.

The story of the Strat Clapton gave Harrison is somewhat more convoluted.

Harrison and “Slowhand” were close friends up until Harrison’s death in 2001, and over the years, Clapton gifted Harrison a number of different guitars. 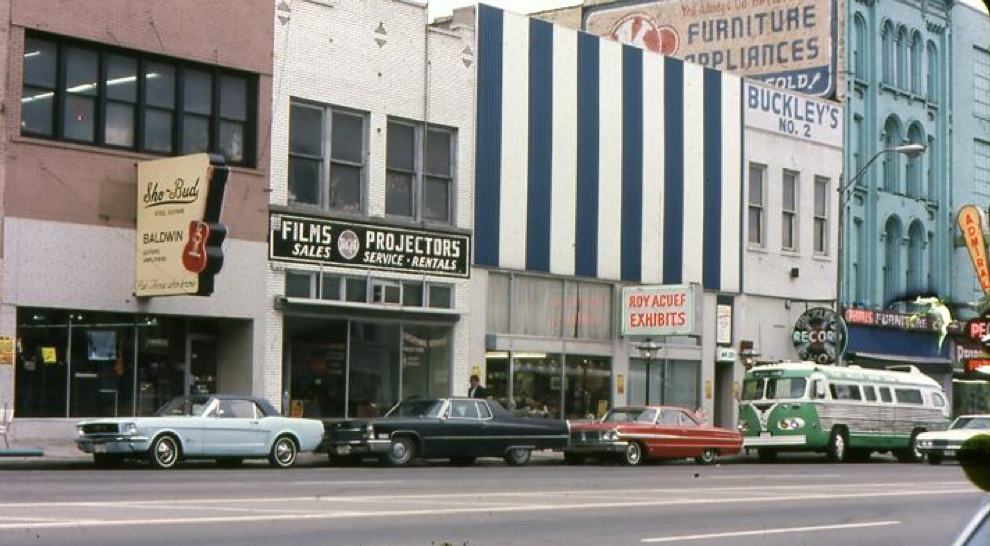 Nashville's Sho-Bud Guitars sign, circa 1970, can be seen on the left.

As far as the Strat from Sho-Bud is concerned, it’s believed that the guitar Clapton gave Harrison is likely the same one the former Beatle can be seen playing at The Concert for Bangladesh. While some accounts suggest the Strat Clapton gave Harrison was a sunburst one, the Bangladesh guitar was stripped to the wood; meaning it possibly could have had a sunburst finish at some point.

Harrison later passed that particular guitar on to his friend, Spike Milligan.

As the story has it, the English comedian and former member of The Goon Show was at Harrison’s house for an impromptu jam session with fellow ex-Goon, actor Peter Sellers (Being There, Dr. Strangelove), who was also a surprisingly accomplished jazz percussionist-sitting in on drums.

As Harrison recalled in The Story of the Fender Stratocaster:

“Spike was playing the piano, and I was playing guitar. Then Spike got off the piano and wanted to play the guitar, so I plugged him into this Strat through a little Champ amplifier. He said, ‘Oh, I haven’t played for 30 years,’ but he just picked it up and it sounded like Django Reinhardt or something. And I thought, well, that’s good. So when he left I put it in the case, and put it and the Champ in Peter Sellers’ boot and told him, ‘When you drop Spike off give him this.’ It’s the Stratocaster from The Concert for Bangladesh.”

Milligan later gave the Strat to a musician friend, and it has since been sold at auction a number of times, most recently in 2008.

It’s fitting that Clapton gave the third of the guitars to Winwood. According to Clapton, it was seeing his Blind Faith bandmate with a white Strat that inspired him to buy any Strats-let alone a half dozen-in the first place.

Unfortunately, of the three Sho-Bud Strats Clapton gave to his friends, it’s proven harder to track down the whereabouts of the one given to Winwood. Given the friendship the two have maintained over the decades, it’s entirely possible the guitar is still in the former Traffic frontman’s possession.

(Editor's Note: We reached out to Winwood’s management for comment on this story. As yet we have received no response, but will update if we uncover the final piece of the puzzle.)