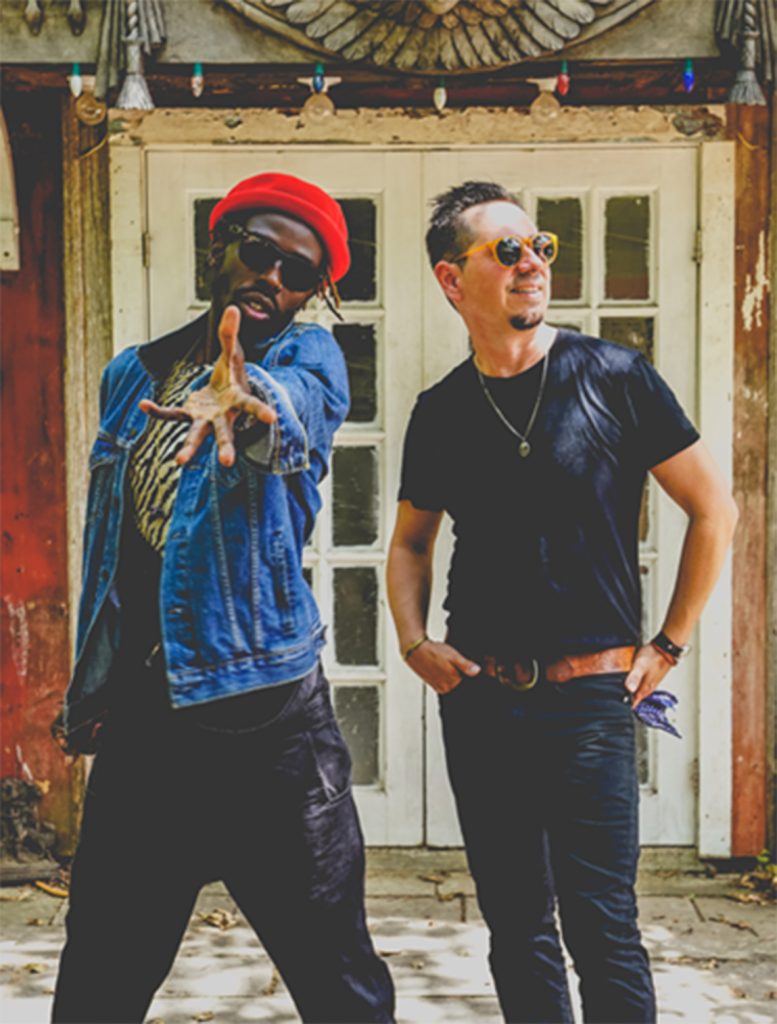 “From the beginning I wanted to just paint some colors that I wanted to see. Discovering myself through the guitar is kind of how I got to know myself”

Even though the duo that make up Black Pumas – Adrian Quesada and Eric Burton – have only been making music together for just over two years, it sounds like they’ve collaborated for a lifetime. It was a winding road to get here, too.

Quesada had been a working musician for about two decades, helping form Grupo Fantasma after moving to Austin, Texas, in 2000 – a band that won a Grammy Award (Best Latin Rock or Alternative Album) – and bounced among other various projects before he began to write his own songs with a psychedelic-meets-soul-meets-hip-hop vibe. Now, Quesada needed someone to sing those tunes.

Out on the West Coast, there was Burton. Raised in a religious household in the San Fernando Valley, Burton got involved in musical theater and began busking at the Santa Monica Pier, eventually making his way to Austin to ply his trade on the famed 6th Street and Congress.

Luckily, a mutual friend connected the two, and when they finally met at Quesada’s Austin studio, a fruitful musical connection was born. Burton’s silky but powerful voice fit nicely with Quesada’s tracks – such as the band’s breakout single, “Black Moon Rising” – while the Los Angeles native brought some of his own, like the R&B-flavored “Colors.”

“One of my favorite things about working with Adrian is he knows the history of some of the music that we both really and truly love, so we are able to make choice that count in the studio in a short period,” said Burton. “I can come in and do what I do and learn from someone who’s been in the industry for so long.”

Still, they had to test the songs out in front of an audience, so Quesada booked a residency at Austin’s C-Boy’s Heart & Soul. The raucous dates proved that Quesada and Burton couldn’t ignore this creative spark.

“I just thought, ‘What if we played some of these songs live and made it an official band?” said Quesada. “Really, the goal at first was to see if our friends come, see if anybody cares and likes these tunes as much as we do.”

The momentum only continued from there, with a stellar showing at the South by Southwest festival in March 2019, an acclaimed self-titled debut album over that summer, several late-night talk show spots and even a Grammy nomination for Best New Artist this year.

Ahead of their appearance at “Music’s Biggest Night,” Black Pumas returned to their Austin roots for an episode of Fender Sessions, taking over C-Boy’s one more time to play the tracks “Colors,” “Confines” and “Know You Better.”

Capturing the energy and soul that Black Pumas had from the beginning seems like a fitting way to embark on an explosive breakout year. 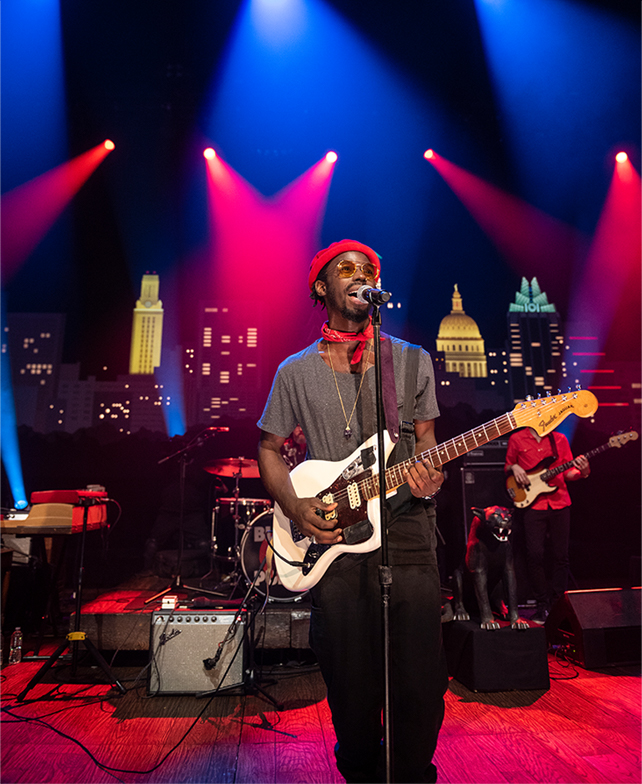 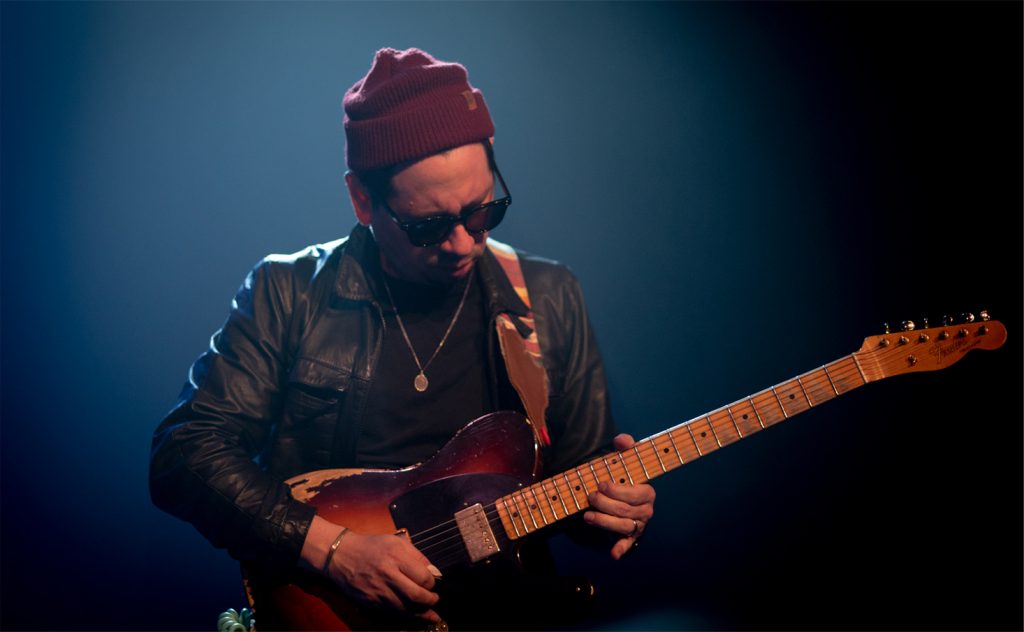 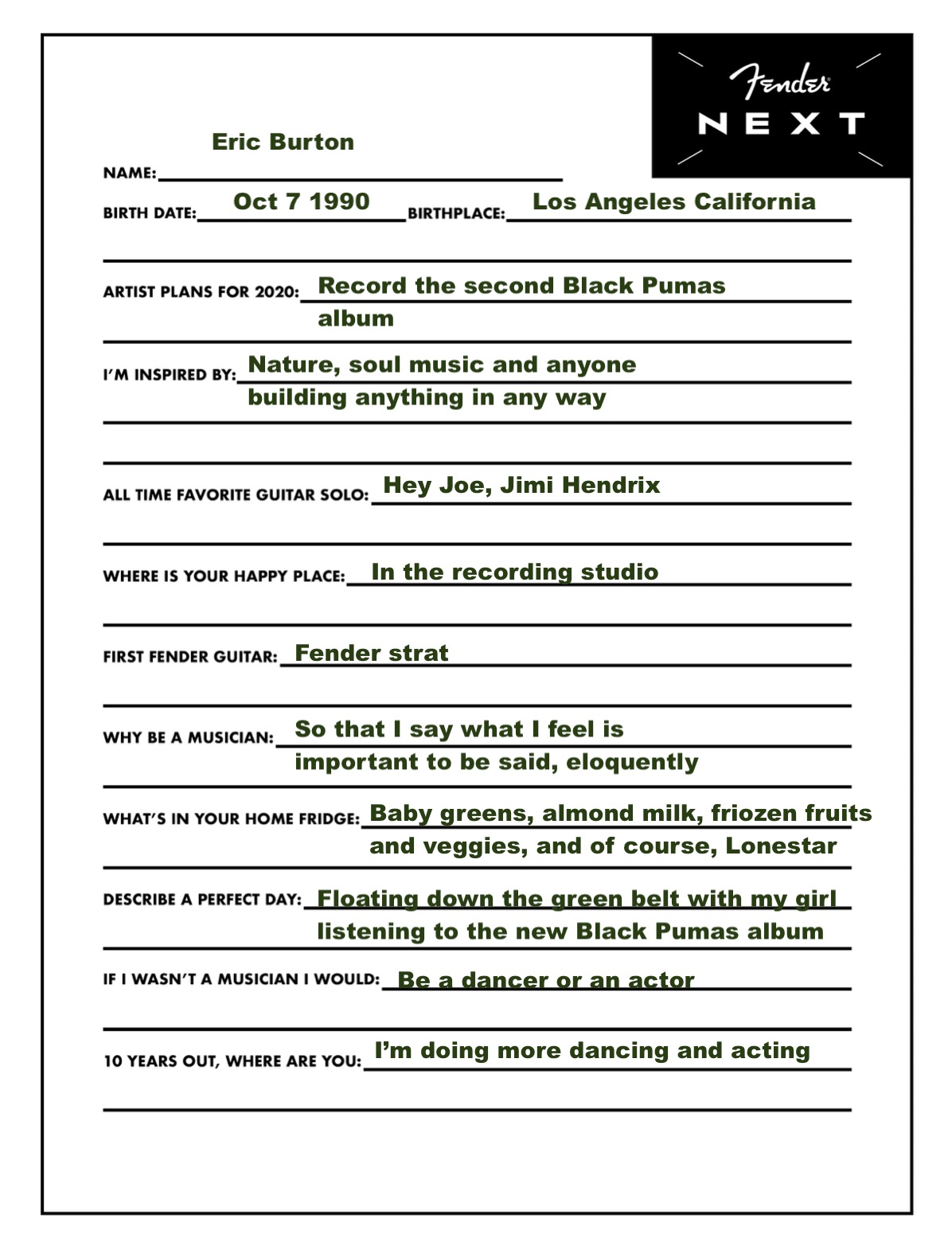 Name: Eric Burton. Birth date: Oct 7 1990. Birthplace: Los Angeles, California. Artist Plans for 2020: Record the second Black Pumas album. I’m inspired by: Nature, soul music and anyone building anything in any way. All time favorite guitar solo: Hey Joe, Jimi Hendrix. Where is your happy place: In the recording studio. First Fender guitar: Fender Strat. Why be a musician: So that I say what I feel is important to be said, eloquently. What’s in your home fridge: Baby greens, almond milk, frozen fruits and veggies, and of course, Lonestar. Describe a perfect day: Floating down the green belt with my girl listening to the new Black Pumas album. If I wasn’t a musician I would: Be a dancer or an actor. 10 years out, where are you: I’m doing more dancing and acting. 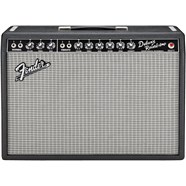 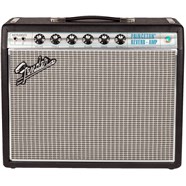 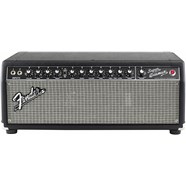 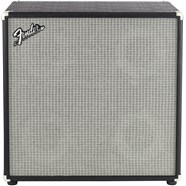