Everything You Need to Record and Produce at Home

AudioBox 96 Studio ultimate is a complete recording and production bundle. Get everything you need to start recording guitar (or anything else) in a single purchase!

The heart of the AudioBox 96 Studio is PreSonus’ best-selling AudioBox USB® 96 interface, which captures your recordings in stellar studio quality. Its two front-mounted combo XLR and ¼” combo jacks let you connect a pair of mics for vocals, acoustic guitar or electric guitar cabinets. Alternatively, you can simply plug your electric guitars in directly and record direct, using Studio One Artist’s Ampire for world-class guitar amp and cab tones — and without your cranked Bassman angering your neighbors. And since there are two inputs, you and a friend can record guitar and bass or vocals and guitar simultaneously to separate tracks to mix later.

The M7 large-diaphragm condenser microphone is the perfect mic for capturing acoustic guitar, but it doubles well on vocals, and the stand is included. The crystal-clear HD7 headphones will help you avoid any mic feedback issues during your recordings, let you closely monitor your performance, and also let you mix and produce late into the night without bothering anybody.

Also included are PreSonus’ best-selling Eris E3.5 monitor speakers. Unlike consumer-grade bookshelf speakers, monitors are tuned for a flat frequency response, meaning there’s no over-hyped bass or under-represented midrange. When recording and producing music, it’s important to hear an honest, accurate representation of what you’re actually recording. The Eris E3.5s are as honest as speakers in their class can be, and you’ll probably find yourself using them for regular ol’ music listening as well.

Finally, you get over $1000 USD of inspiring professional audio software — including Studio One Artist and the Studio Magic Suite, so your productions will be a step ahead from day one.

We even include all the cables required to hook it all up, so you’ll hit the ground running right out of the box and get your creative vision out into the world faster than anyone else. 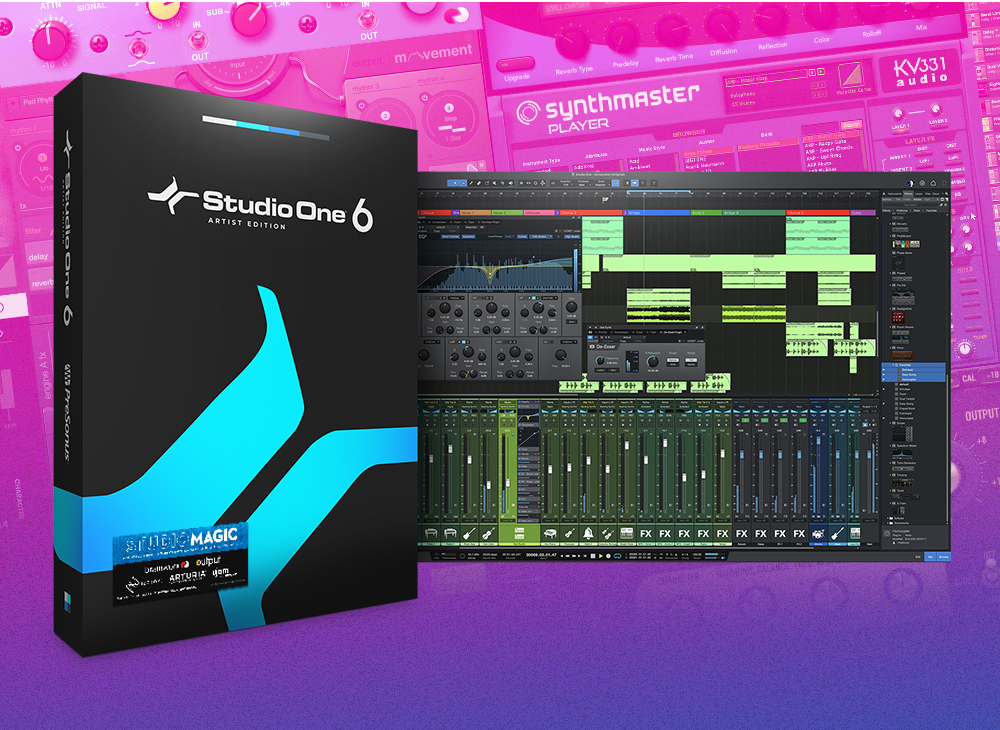 The AudioBox® Studio Ultimate Bundle comes with PreSonus® Studio One™ Artist and the Studio Magic Software Suite for a complete recording solution. Studio One offers unlimited tracks and plug-ins and is easy to learn and use. Studio Magic includes over $1,000 USD of plug-ins, loops, virtual instruments, effects and tutorials.

With their 25 watt/side power amp and 3.5-inch woofer, Eris® E3.5s get surprisingly loud, while delivering clear, accurate audio and rich bass. The one-inch tweeter produces a smooth, refined sound and a wide “sweet spot.” High- and low-frequency controls adjust the Eris E3.5s to compensate for room acoustics and the effects of speaker placement.

Capture every nuance with the M7 condenser microphone.

PreSonus’ high-definition HD7 headphones take advantage of a patented, semi-open sound chamber to deliver exceptionally deep low frequencies with a balanced and yet powerful bass punch. Accurate midrange and extended treble response let you pick out the fine details of a mix or track. The lightweight, ergonomic design adjusts to any head size, offering a comfortable listening experience during long recording sessions.

The PreSonus AudioBox 96 Studio is natively compatible with Apple Silicon-based Mac computers*, as well as iOS and iPadOS devices, including iPad Pro, iPad, iPad Air, iPad Mini, iPod Touch, and iPhone. Because it's USB class-compliant, there are no special drivers or applications to download and install. You'll be able to produce on the go—everything from podcasts to folk rock to trap—wherever sound takes you.

Please wait while we search for any available online dealers.

All online dealers listed here will have the specified product in stock, ready for purchase.

Sorry, we weren't able to find any online dealers in stock at this time.

Please check back later or close this window and click the "NOTIFY ME WHEN AVAILABLE" button to receive an email when this item is back in stock.

Thank You for Contacting Dealer

Back to the Site
Browse More Premium Dealers