This Guitar + That Amp = Epic Tone

4 amp/guitar combos to get that Fender sound. 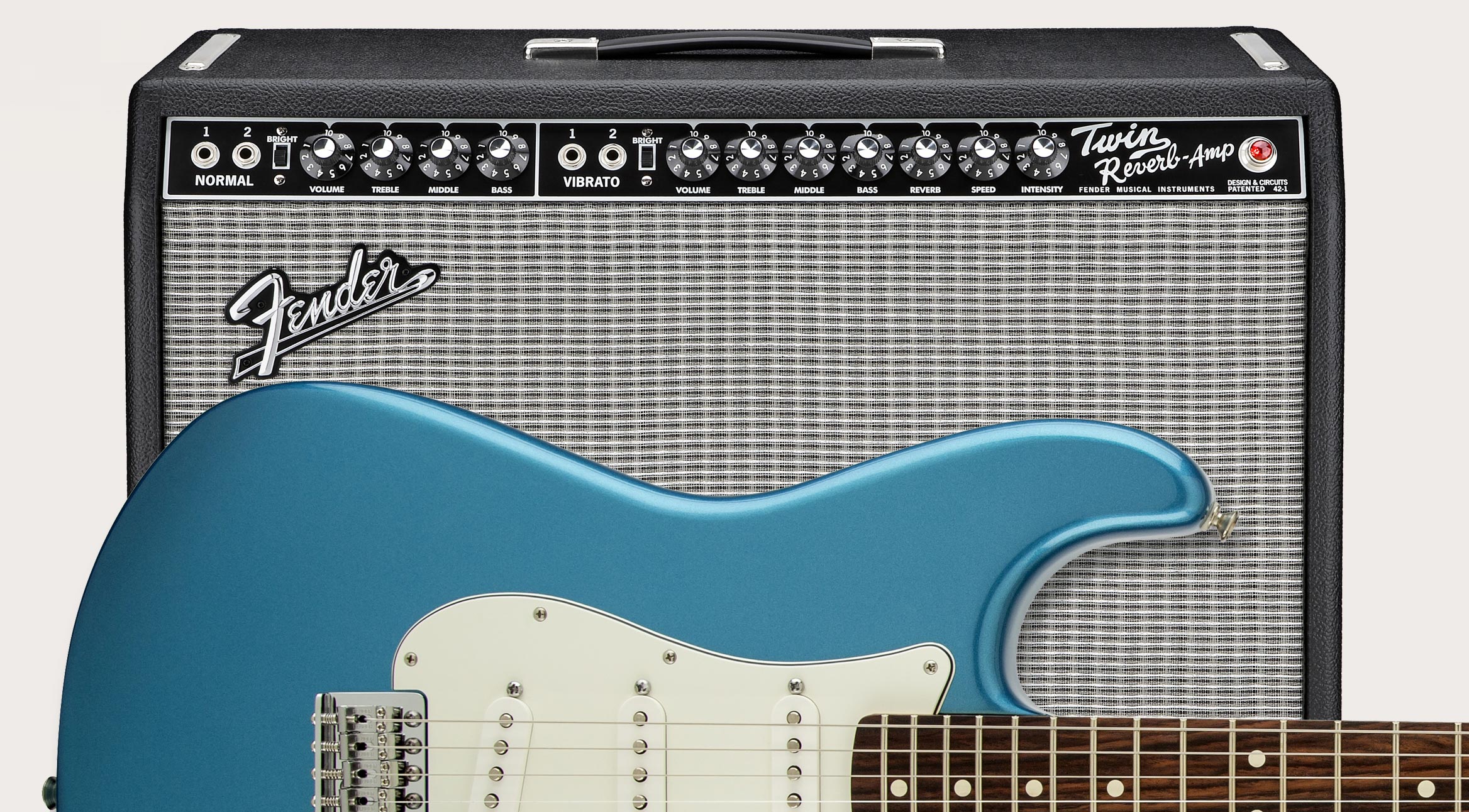 A Stratocaster and a Twin Reverb amp: One of the all-time great Fender guitar/amp combinations.

Fender has been noted worldwide for well more than half a century as one of the few manufacturers equally acclaimed for its guitars and amplifiers. Down through the company’s long history, a handful of Fender guitars and amps have been paired together in what proved to be classic combinations.

Although Fender has evolved with the times, those classic combinations are without exception still present in modern-day versions of their time-honored predecessors. Here are four great Fender guitar/amp combinations, including modern counterparts that await you today at your nearest Fender dealer. 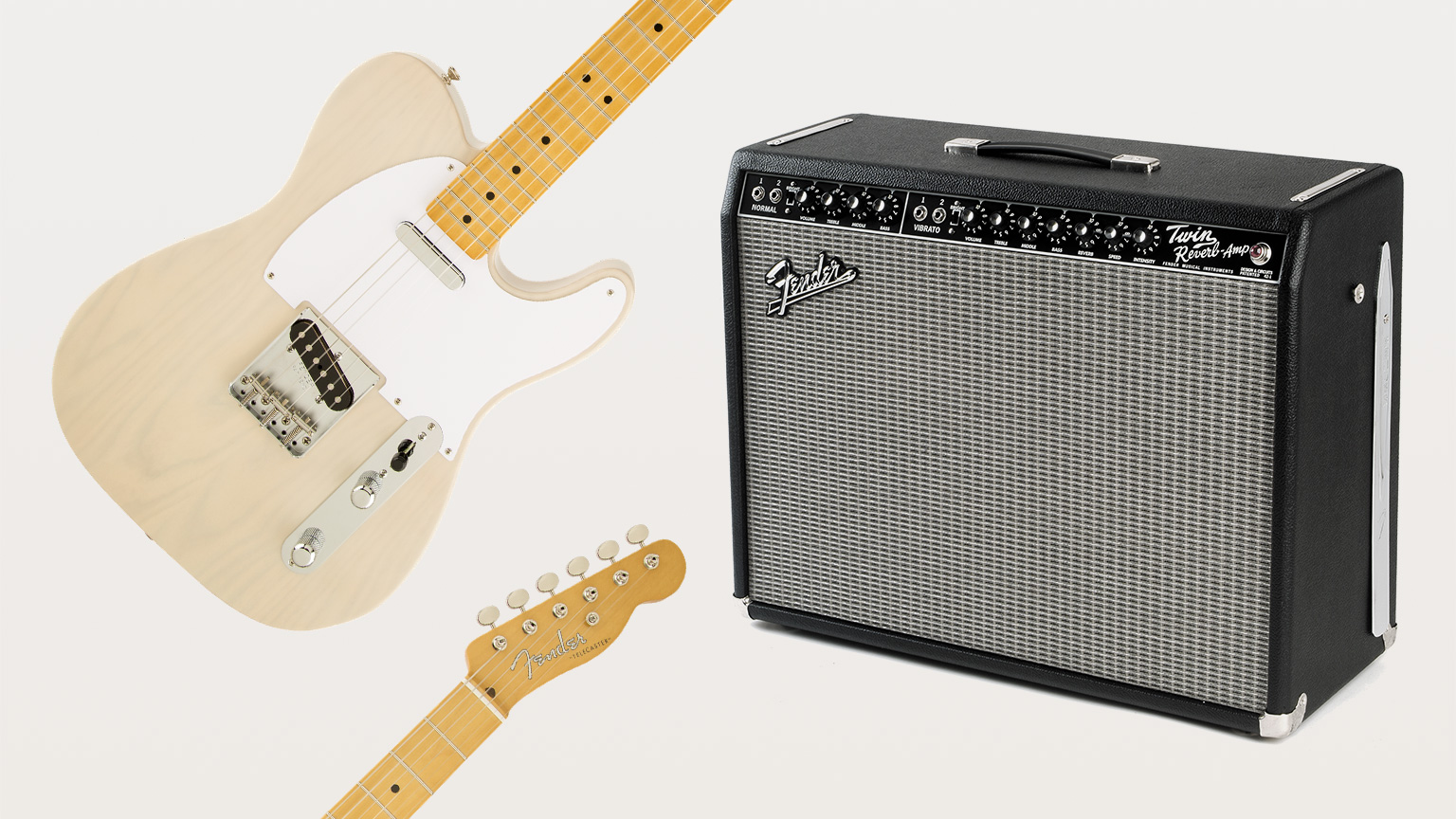 This is the sound of country. The real-deal clear, trebly twang of a Telecaster plugged into a 1965 Twin reverb amp has defined pure country music for more than four decades now. As author Dave Hunter notes in his Guitar Rigs: Classic Guitar & Amp Combinations, “It’s the instrument that put the twang into country, and for plenty of guitarists, this first-ever mass production solid-body guitar is the only tonal tool that needs to live in the toolbox.”

Vintage guitars and amps can be a tad expensive these days, but not to worry — that classic country combination is still readily available in modern Fender form. Want that sound today? Use an Classic Series '50s Telecaster Lacquer with a Vintage Reissue ’65 Twin Reverb. James Burton would be proud. 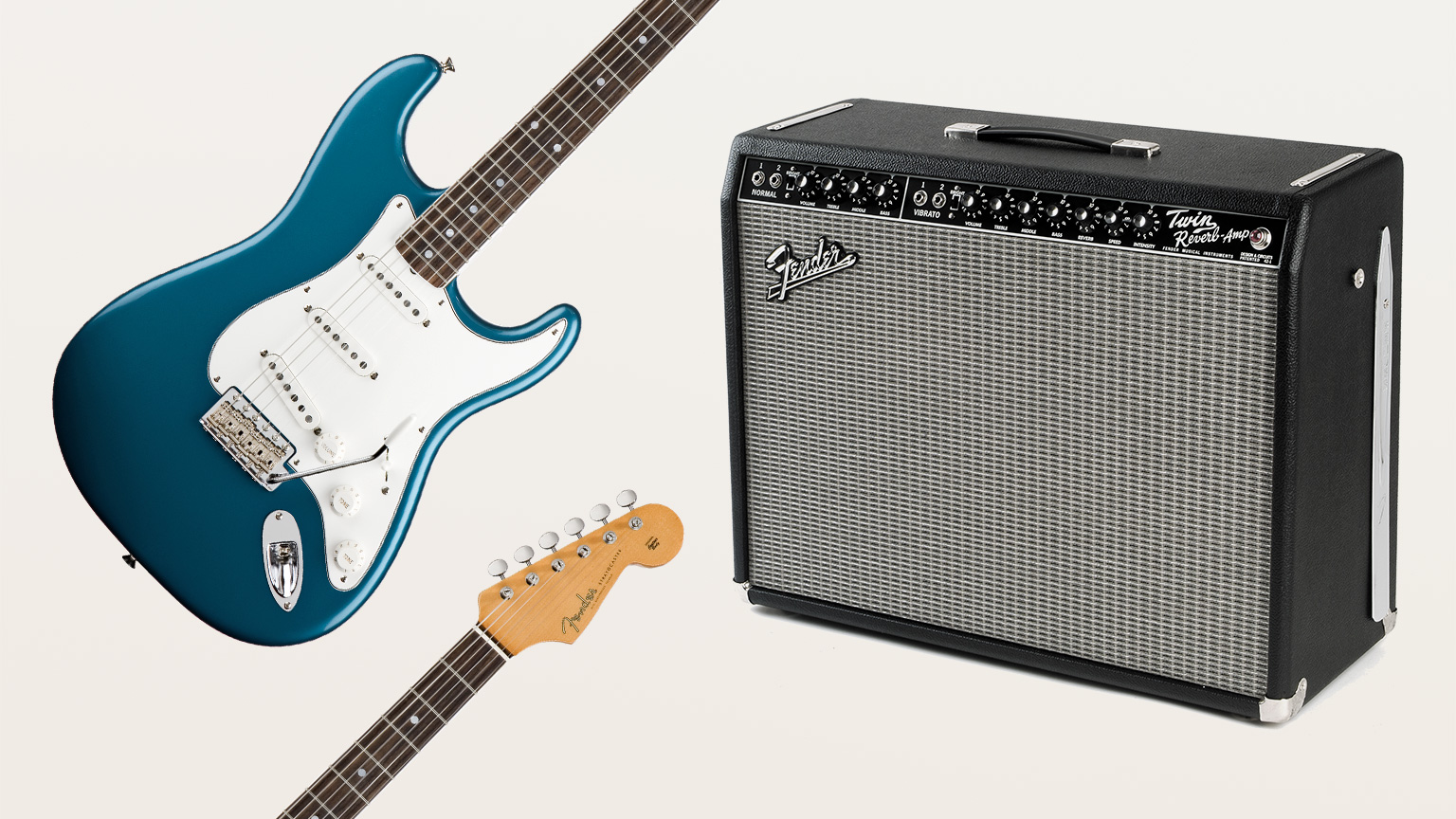 Texas Stratocaster virtuoso Eric Johnson is a musician’s musician admired worldwide for his immediately identifiable pure guitar tone, and not for nothing has he been one of Fender’s most popular signature artists for several years now.

The good news for guitarists is that Johnson’s utterly glorious tone is not at all unattainable. In fact, one need look no further than the guitarist’s own signature Eric Johnson Stratocaster model, which has pickups wound to Johnson’s specifications, a quartersawn "V"-profile neck and other features specified by Johnson himself. Amp-wise, Johnson’s signature clean tones have always come from a Fender Twin Reverb; sounds you can nail using a Vintage Reissue ’65 Twin Reverb. 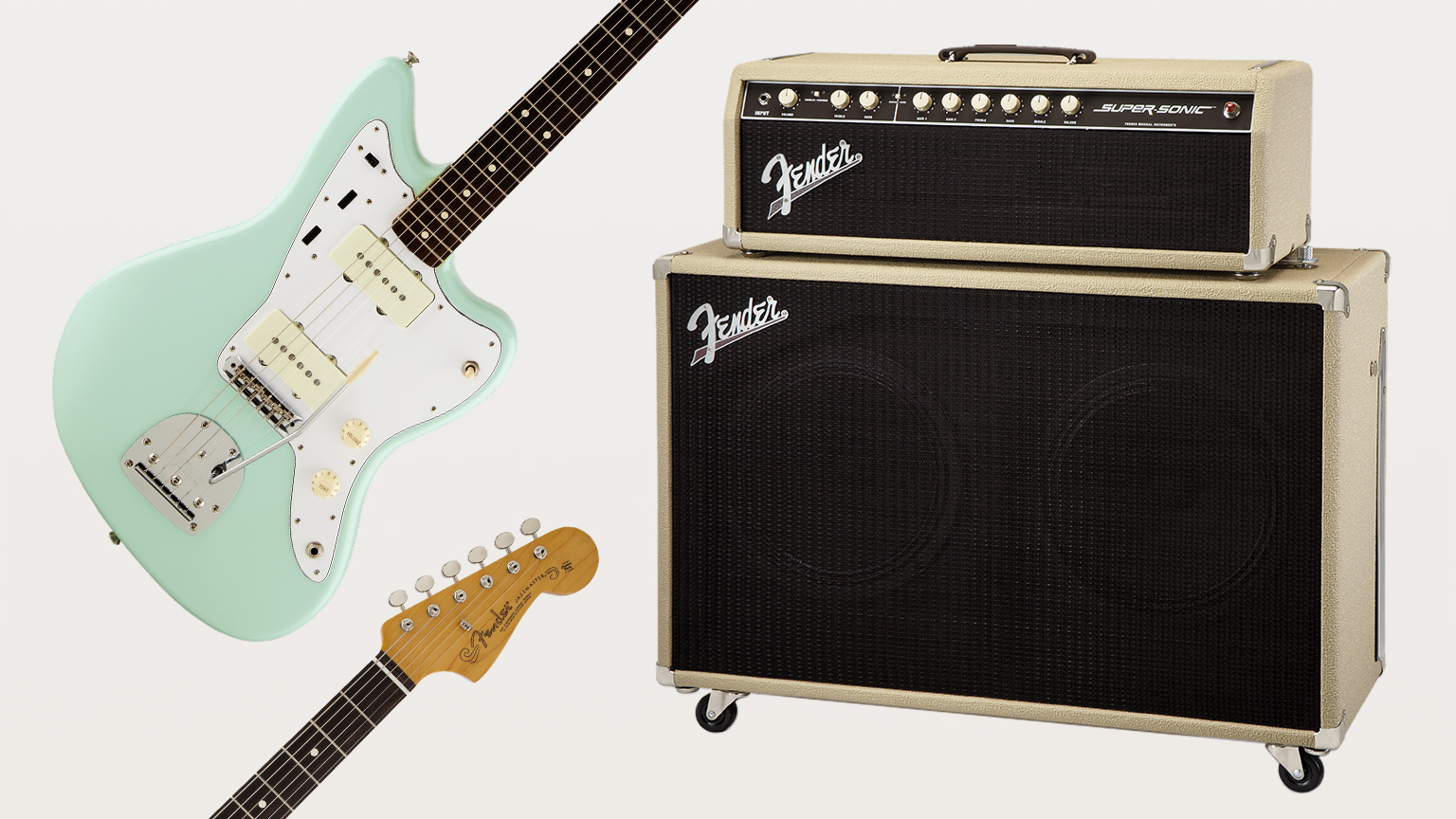 Nothing epitomized the reverb-drenched sound of the surf era like a late-’50s Jazzmaster through an early-’60s Showman amplifier (and its subsequent sibling, the Dual Showman®). With a Fender Reverb unit between instrument and amp, seminal instrumental groups like the Ventures, the Surfaris and the Chantays brought the roar of the ocean to stage and studio alike.

Surf music has enjoyed a hip resurgence in the past decade or so—bands such as Los Straitjackets, the Bomboras, Satan’s Pilgrims, Man or Astro-Man? and the Mermen have all rode the wild surf with renewed vigor and just as much reverb. Fender is still there to catch that wave too, with current gear such as a '60s Jazzmaster Lacquer in classic Surf Green through a ’65 Twin Reverb, or, if you crave that surf-classic blond piggyback look, a blond Super-Sonic™ head and matching blond 212 cabinet. Cowabunga, dude! 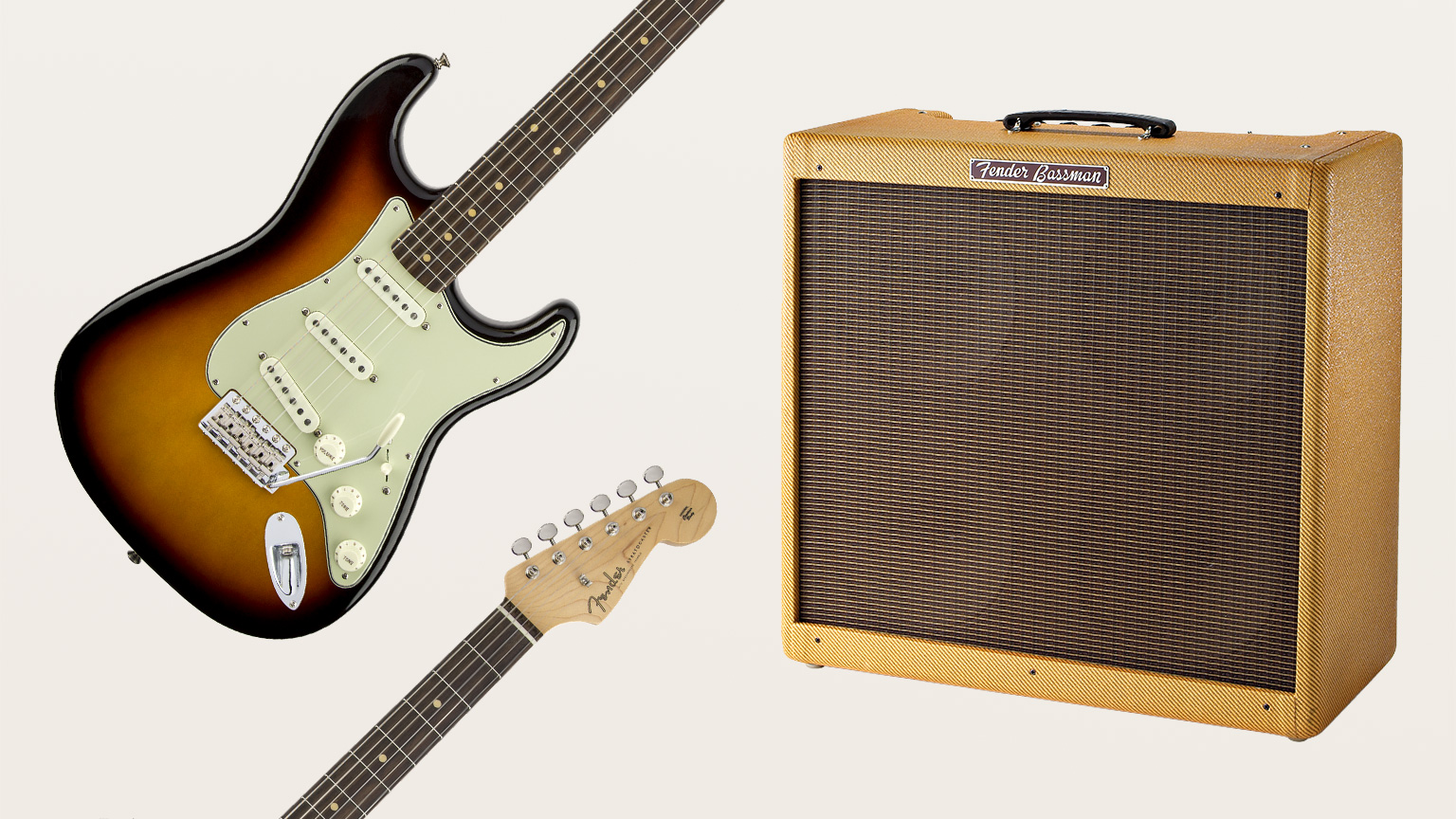 This is the sound of electric blues—Fender’s most famous guitar through one of its most beloved amps. It’s a “strong contender for the title of ‘All-Time Most Beloved Rock Rig'” and “one of the most versatile, toneful and desirable pairings known to the electric guitarist,” according to Hunter in Guitar Rigs: Classic Guitar & Amp Combinations.

A ’50s or early ’60s Stratocaster through a tweed 4×10 Bassman amp equals clean, bell-like tone at low volume that breaks up sublimely into perfect rock ‘n’ roll crunch when you start turning it up past 4 or so. Just ask Buddy Guy or Jimmie Vaughan. To get the classic sound of this classic combination today, try an American Vintage ’65 Stratocaster for rosewood-fingerboard vibe, through a Vintage Reissue ’59 Bassman LTD.