How to Play the E Major Pentatonic Scale on Guitar

The E Major Pentatonic Scale is essential for many genres like folk, blues, country, and pop music.

If you’re new to playing guitar, you might not be familiar with pentatonic scales, however, they can help unlock a whole new world of tones for you and grow your proficiency with your instrument. For example, E major pentatonic scale is a great scale to expand your guitar runs, helping you to better craft solos and develop a greater understanding of notes in relation to one another on various positions on the fretboard.

Get ready to warm up your fingers and get familiar with the E major pentatonic scale. We’ll show you the five notes included in this scale, as well as how to play it using guitar charts and tablature. Let’s get started.

Pentatonic scales are easy to play because they are comprised of only five notes (as noted by the prefix “penta,” which is derived from the Greek for “five”). Having fewer notes to remember makes it easy to recall this pattern. With that in mind, the major pentatonic scale’s formula is 1 – 2 – 3 – 5 – 6 notes of a given scale.

The E major pentatonic scale is made up of just five notes. More than half of the notes in this sequence are sharp notes. As your fingers move across the fretboard, you’ll repeat all five of these notes in higher or lower octaves. Those five notes are:

These five notes can also be found among the seven notes that make up the E major scale, with A and D# being the other two. Additionally, the notes E, G# and B make up the E major triad chord, helping you to connect this scale to specific chords and their formation.

There are a variety of ways to play the E major pentatonic scale. In this lesson, we’ll learn how to play it in the open position. First, you’ll start on the 2nd fret of the low E string.

Let’s use the chart below to learn the open position of the E major pentatonic scale. This diagram represents the neck of your guitar with each dot showing you which note you’ll play on a specific fret and string. If you see a dot with a note above the string, play the string in an open position. The yellow dots indicate the root note of the scale – in this case, the root note is E.

To begin, strum the open low E string and then place your first (index) finger on the 2nd fret of the low E string. Stretch your third (ring) finger to the 4th fret on the same string. As you move through the notes in this scale, notice that your index finger will play the 2nd fret of each of the six strings (plus the 1st fret of the G string) and that your ring finger will play the 4th fret when playing this scale. 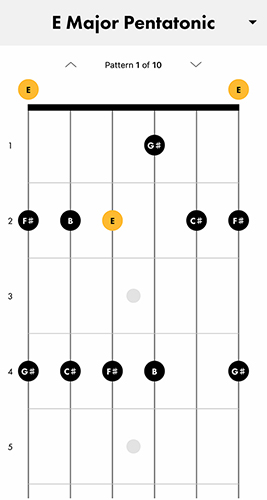 While some guitarists prefer reading charts (as shown above), others may have an easier time learning to play scales using tabs. So, to give you a different perspective, let’s try that E major pentatonic scale using tabs:

Once again, the ascending version of the E major scale starts on the open E string with the root note E as your “home base.”

If you take a look at this version of the E major pentatonic scale in the open position, you’ll notice that this version follows a pattern of playing three notes on one string then two notes on the next string and then repeating that three-two pattern across the next two strings, finishing with a single note (the fifth fret.

Although you just played a bunch of notes to get from one side of the fretboard to the other, you really only played those five unique notes (E, F#, G#, B and C#) total in the E major pentatonic scale.

The best way to memorize the E major pentatonic scale is to practice playing the scale ascending and descending. Start with the root note of E, then play F#, G#, B and C# and then a higher E. Then, climb your way back up the scale starting with the higher E followed by C#, B, G#, F and low E.

Play around with this scale in the open position and it’s other variants. To learn different versions of the E major pentatonic scale, check out Fender Play and the Fender Tune app for Android or iOS.

Want to challenge yourself even more? As an added bonus, practice alternate picking when playing the E major pentatonic scale. You’ll not only hone your mechanical skills as a guitarist by experimenting with different picking techniques, but you’ll also train your ear.

To learn more pentatonic scales, chords, and musical theory, sign up for a free trial of Fender Play today.