How to Play the Bm7 Chord on Guitar

Learn how to play the Bm7 chord on guitar and get started learning your favorite songs. Check out the guitar chord charts to grow your skills.

Lesson: How to Play a Bm7 Chord

The Bm7 chord (sometimes written out in-full as B minor 7) has a chipper, albeit a unique ring to it. It takes the standard composition of a B minor chord and adds a 7th note to it that gives it a little extra “kick.” You can hear this chord make an appearance in a variety of rock and pop songs.

In this lesson, we’ll show you two different ways to play the Bm7 chord, along with a few songs that feature the chord. Ready to play? Let’s get started.

How Do You Play a Bm7 Chord on Guitar?

The Bm7 chord is made up of four notes:

When learning to play different chords, you may hear a lot about the formulas that comprise minor chords and major chords. Seventh chords, like the Bm7 chord, use a slightly different formula, adding a minor 7th note to the minor chord formula. That note is what elevates a sad and downtrodden B minor chord from a more upbeat-toned Bm7 chord. In terms of construction, the Bm7 chord is made up of its root note B, a minor 3rd (D), a perfect 5th (F#), and a minor 7th (A).

Now that you have a better understanding of the formula behind building a Bm7 chord, we’re going to show you two ways to play it. This first version of the Bm7 chord is played in the open position, in standard tuning. Playing a chord in “open position” means that you’ll have some strings that can ring out without needing to fret a note on them.

To play this open version of a Bm7 chord on your guitar, you’ll place your fingers on the following strings and frets: 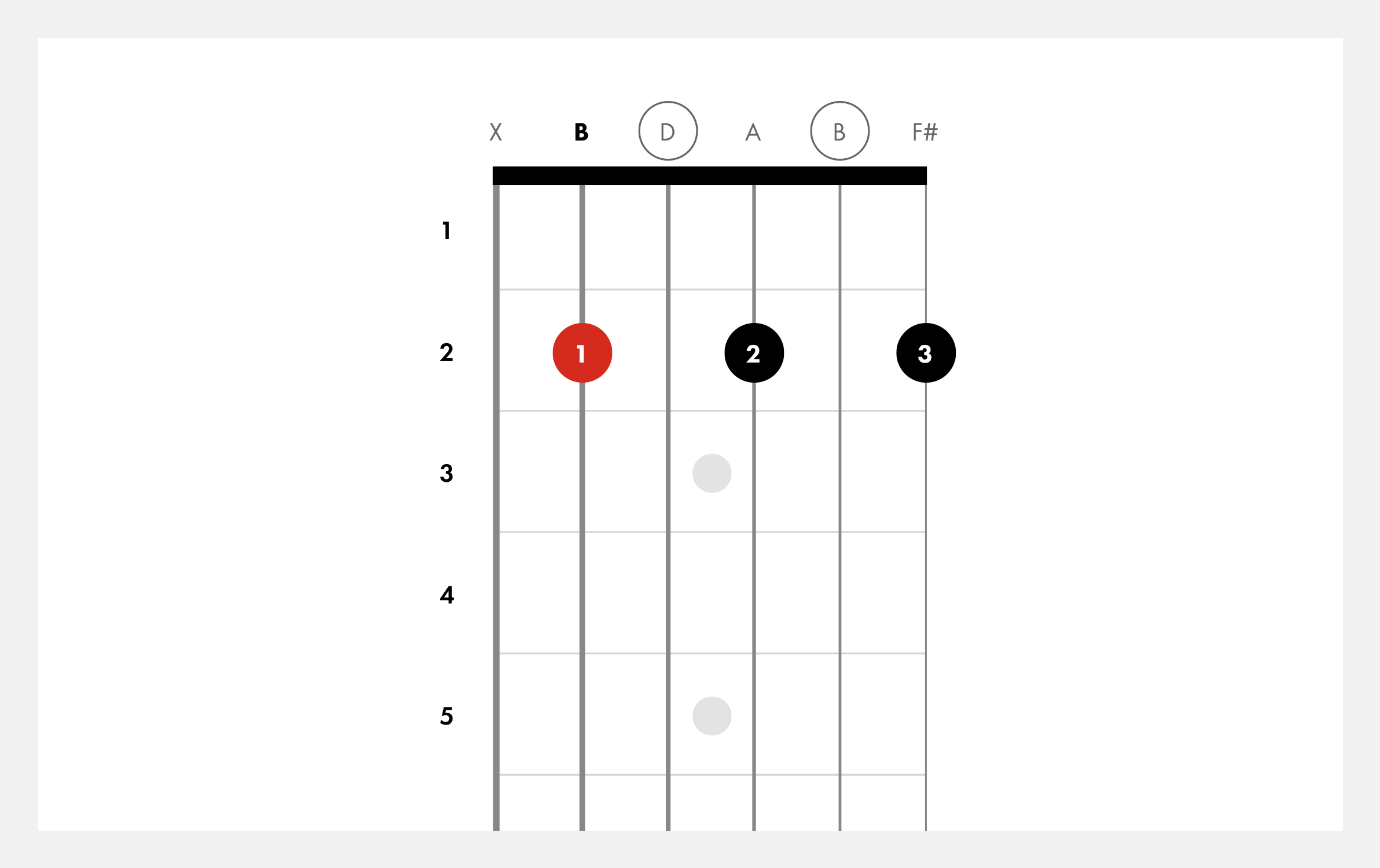 Strum 5 strings down from the A (5th) string, omitting the low E (6th string). This version is a little tricky to play since you’ll want your D (4th) and A (2nd) strings to ring out freely. Be sure to cleanly fret the notes on your strings so you’re not accidentally muting adjoining strings that should be played in an open position. Take your time and practice this version of the chord and you’ll soon see a difference in how crisp it sounds!

Another way to play the Bm7 chord is in the 2nd position. Playing a chord in the 2nd position means that you won’t be playing any open strings. Rather, the lowest-toned notes you’ll play in this rendition of the chord will begin on the 2nd fret of your guitar.

This version of the Bm7 chord also uses a barre chord technique, in which you’ll “barre” your finger across the 2nd fret of five of your strings.

To play the Bm7 chord in the 2nd position on your guitar, place your fingers on the following frets and strings: 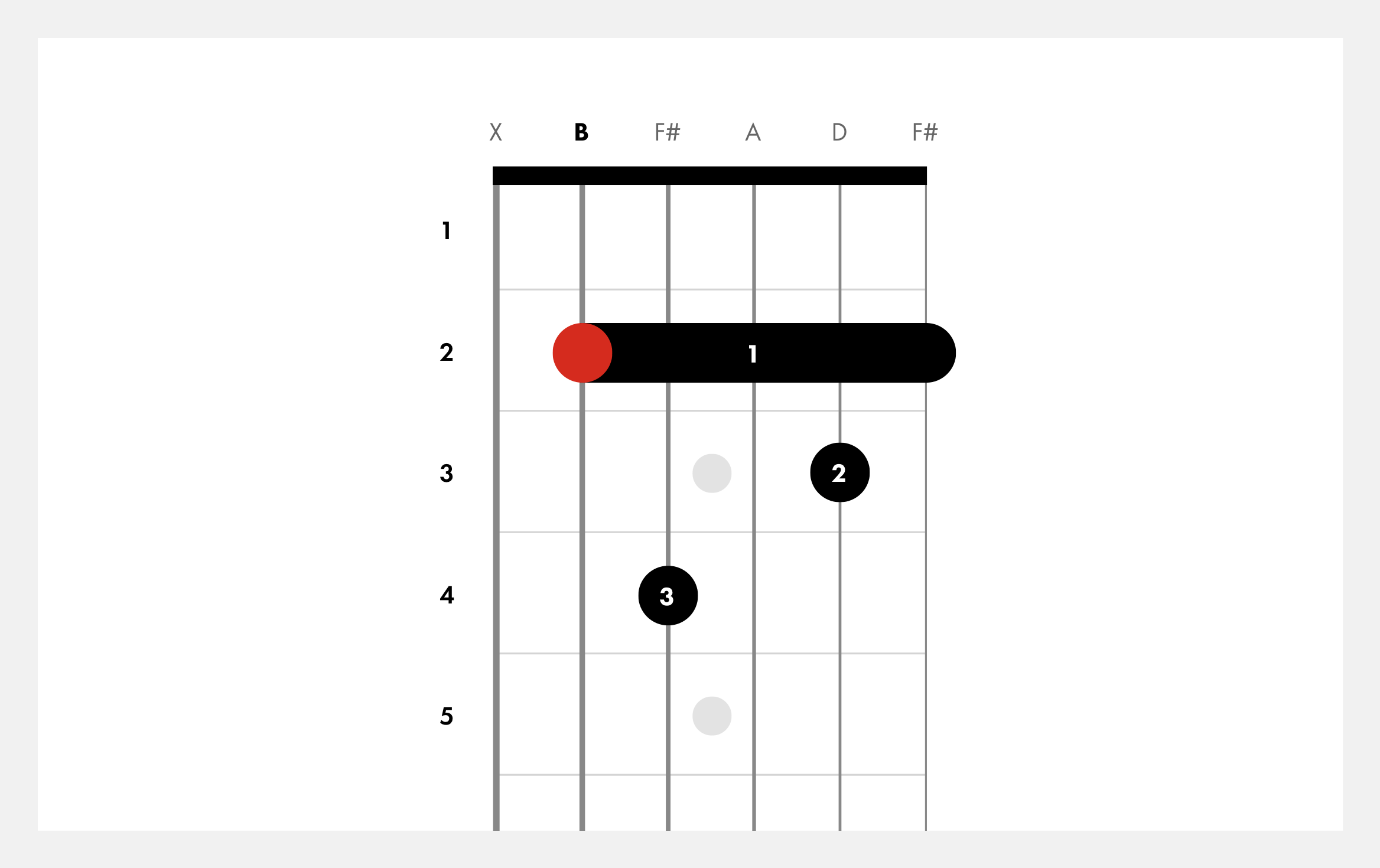 Strum 5 strings down from the A (5th) string, omitting your low E string.

Songs That Use the Bm7 Chord

The Bm7 chord’s cheery tone makes it a fit for a variety of songs. Here are two very different songs that use the Bm7 chord. Listen for when the chord makes an appearance and try your hand at playing both! When you sign up for a free trial of Fender Play, you’ll unlock these songs, plus hundreds more!

Gene Autry’s holiday classic, “Frosty the Snowman” was recorded in 1950 but remains timeless. As a country artist, Autry was well-acquainted with jangly chords. They fit perfectly on this tale of a snowman come to life. You can hear the Bm7 chord make an appearance on the bridge of the tune.

Moving to a more modern instance where you can hear the Bm7 chord, listen to Butch Walker’s ode to The Pretenders’ lead singer, “Chrissie Hynde”. On the 2014 track, singer-songwriter Walker weaves the open version of the Bm7 chord we just learned into the chorus. Packed with nostalgia and longing, the song shows another side to the Bm7 chord.

As a guitarist, one of the most important skills you’ll learn is how to play chords. In addition to showing you how certain notes blend together in unique ways, chords are also a foundational building block of learning to play songs. To learn more chords, browse through Fender Play's chord library. Once you’ve mastered the Bm7 chord, try playing it along with other chords in some of your favorite songs. Find them all with a free trial of Fender Play today.