There’s more than one way to tune a guitar. Tunings outside of standard guitar tuning are called “alternate tunings.” While they may initially seem tough to master, alternate tunings are a great way to expand your musical knowledge.

In this lesson, we’ll learn how to tune your guitar to open D, a popular alternate tuning. We’ll also discuss the benefits of experimenting with alternate tunings and cover some songs in open D tuning.

What is Open D Tuning?

When you strum open strings on a guitar in the vibrant sounding open D tuning, it’ll sound like a D chord.

There’s a couple reasons why you might want to wander away from the easy-to-understand standard tuning: First off, alternate tunings allow you to experiment with songwriting. Famous guitarists like Joni Mitchell and Keith Richards played many of their greatest hits in alternate tunings.

Secondly, open D tuning on guitar allows you to just hold down a couple strings to make chords. Because of this, open D tuning is popular with slide guitar players as they can play complete chords using the slide.

Lesson: How to Tune Your Guitar to Open D

Open D tuning changes the tuning of all but two of the six strings on guitar. Here’s difference between standard and open D tuning: 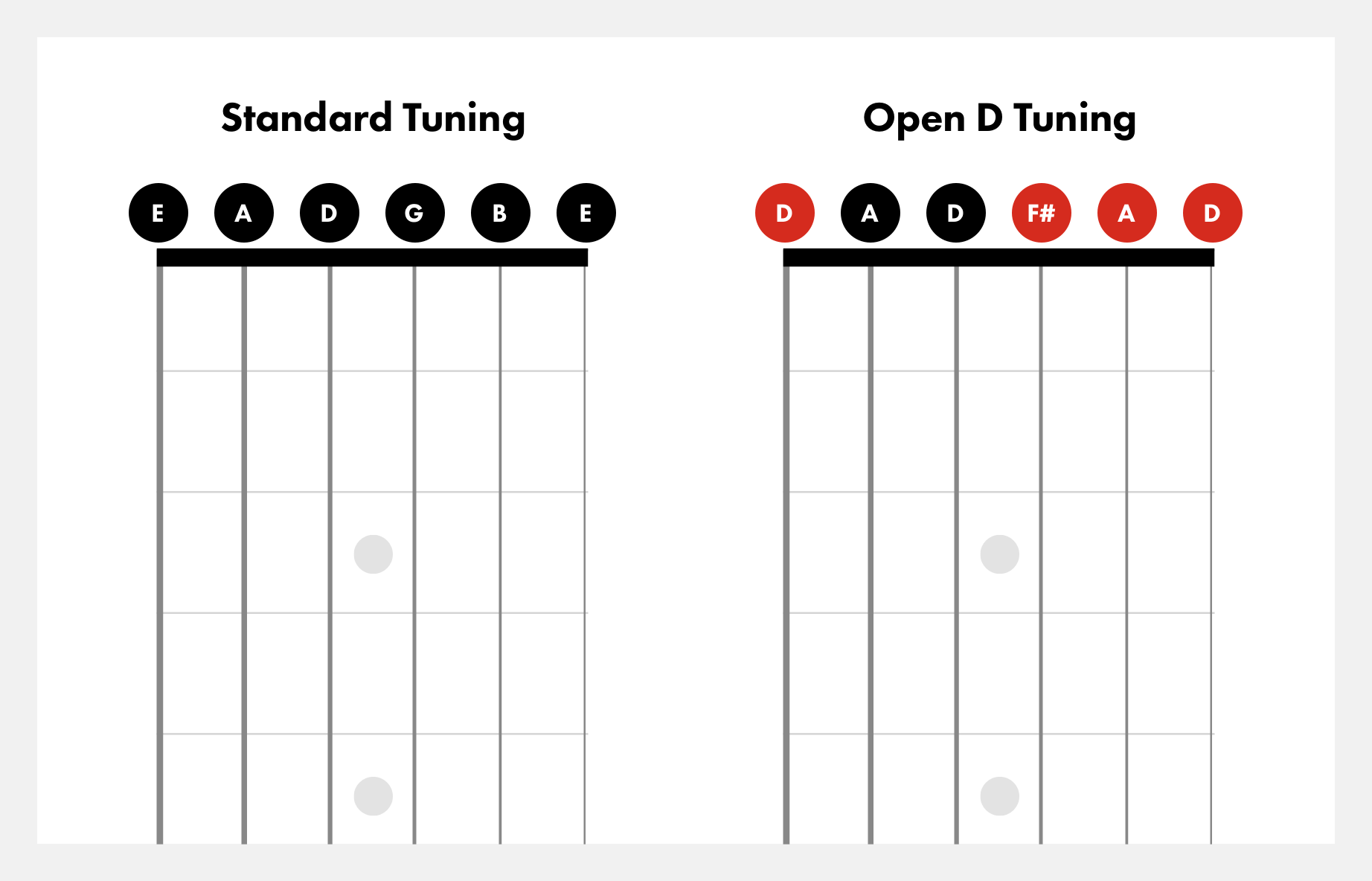 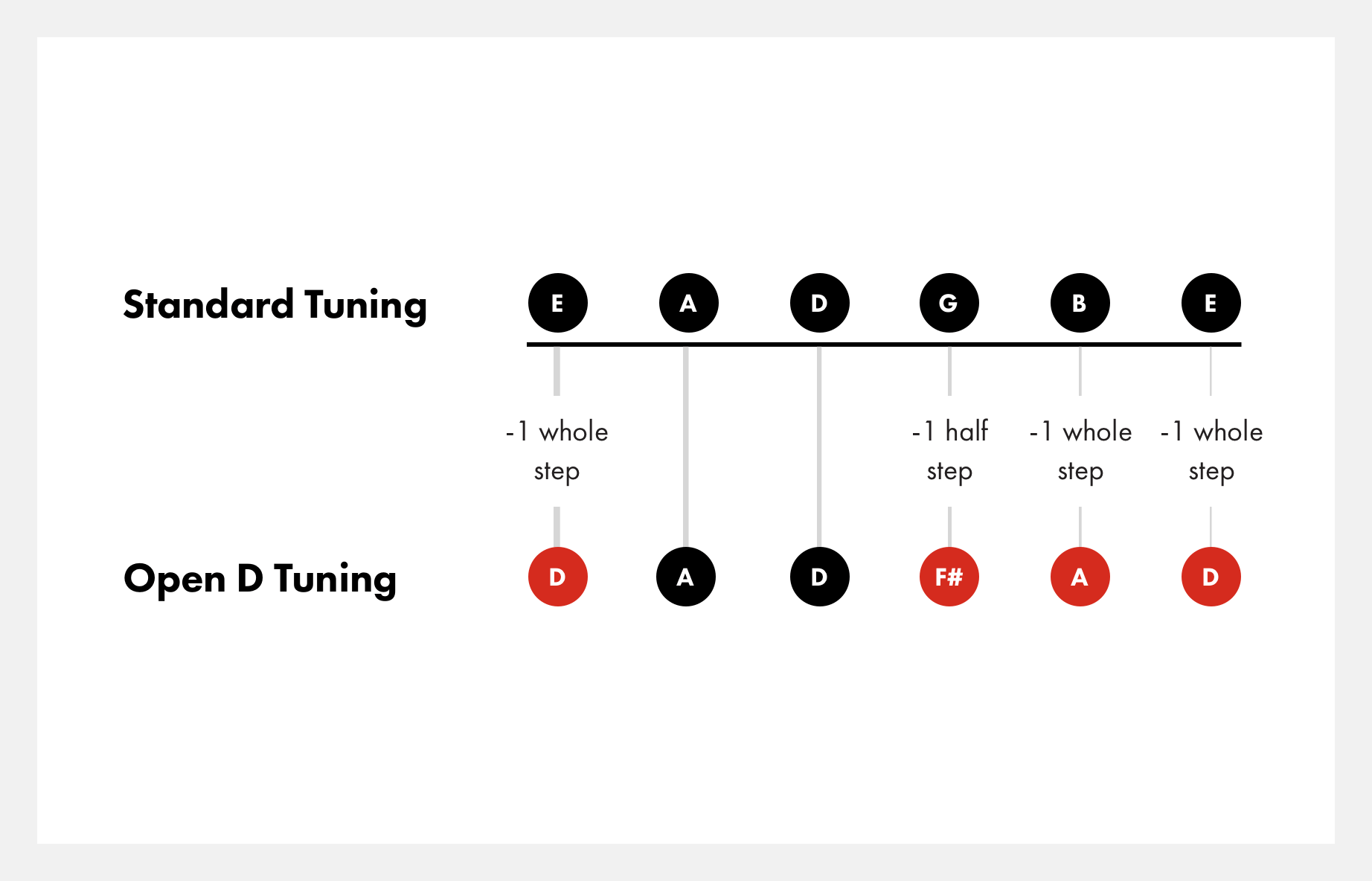 Now that the difference between standard and open D tuning is clear, here’s how you tune a guitar to open D: Start by plucking the low E string. Tune it down a whole step by turning the tuning peg clockwise towards you. Keep plucking the string until you hear the correct note. Repeat for other strings that need tuning.Pro tip: You can use the Fender Online guitar tuner to help you tune your guitar to the correct note. Use either the Electric Guitar Online Guitar Tuner or the Acoustic Guitar Online Tuner. Or download the app for your phone. Both the web and app versions give you the ability to adjust your settings and tune specifically to Open D and other alternate tunings. No tuner? No problem! Tune your guitar by ear: Start by playing the note you’re trying to tune to on another string and try to match it. e.g. To tune your low and high E strings to a D, play the D string (3rd string) and adjust the tuning pegs until the notes sound similar. Note that the D on the 1st string will be in a lower octave than the 3rd string, and the 4th string D will be in a lower octave than the 6th string.Play your low A string in an open position, then match the tone as you tune down your B string a full step. Tune your G string down by half a step to F#. Match the note to the tone you hear when you play the 4th fret of your D string. Since they are neighboring strings, the tone will sound the same -- not a higher or lower version of your F#.

It might require some mental gymnastics in order to successfully play the chords you know in open D tuning. Practicing songs in this alternate tuning is a good way to teach yourself how.

“Big Yellow Taxi” makes use of open D’s cheery sound to describe a humorous and ironic situation: Folk musician Joni Mitchell told a journalist she was inspired to write “Big Yellow Taxi” while in a Hawaii hotel room. She looked out her window to see gorgeous mountains juxtaposed by an ugly parking lot down below.

Mitchell plays the song in the key of E, so it’s possible to play it in the alternate tuning of open E. However, you risk breaking your strings tuning up that high. Play it safe by tuning to open D and clipping on a capo at the second fret.

“The Cave” by Mumford & Sons

“The Cave” lacks the playful sound heard in “Big Yellow Taxi.” Instead, the open D tuning used in this song by folk rock band Mumford & Sons creates a stoic yet uplifting listening experience, bringing out the emotions in the lyrics: “‘Cause I need freedom now/And I need to know how/To live my life as it’s meant to be,” singer Marcus Mumford belts. Inspirational indeed!

Alternate tunings can be challenging, but venturing outside of standard tuning can be rewarding because it reveals new ways to play chords and to set an emotional tone to a song. With practice, you can master open D tuning, as well as some of its variations, such as open E tuning or open A tuning. Learn more with a free trial from Fender Play.