How to Play the E Flat Major Chord on Guitar

Learn how to play the E Flat (Eb) Major chord on guitar and get started learning your favorite songs. Check out our guitar chord charts to grow your skills.

Lesson: How to Play an E Flat (Eb) Chord

Welcome, friends! In this lesson, we’ll walk through how to learn the E flat major chord on guitar. Sometimes you’ll see this chord also written as Eb.

Before we get into the nuts and bolts of showing you how to play the chord, here’s a quick rundown of the concept of sharps and flats for those who aren’t familiar:

• The smallest interval between two notes is a half step. A sharp raises the pitch of a note by a half step and a flat lowers the pitch of a note by a half step.
• One of the easiest ways to grasp this concept is to visualize a piano. On a piano, the white keys are the natural notes and the black keys are the sharps and flats.
• On a guitar, a half step is the interval between one fret and the next (while a whole step is two frets).
• The symbol used to communicate a sharp is the hash/number sign: #
• The symbol used for a flat is this symbol: ♭ or a lowercase b.

Why Should I Learn the E Flat Major Guitar Chord?

Aside from expanding your musical education overall, here are some benefits of learning Eb:

To get two for the price of one!

As we noted above, Eb is the same as D#. Once you learn the Eb chord, you can also use it anytime you see the D# major chord in a song.

To have options when learning classic songs.

In standard tuning, the string notes from lowest to highest are E, A, D, G, B, E. That said, it’s not uncommon for musicians to tune every string a half step down. This allows them to play open chord formations while singing at a slightly lower register. With this technique, the string notes change to Eb, Ab, Db, Gb, Bb, and Eb.

Because of this technique, you may come across classic songs that are in the key of Eb vs. the key of E natural. If you want to learn a song like this, you have options. You can:

To master songs with key changes.

Key changes can add a sense of energy and drama to a song. Think about the pure joy at the end of Beyoncé’s “Love on Top.” The key changes several times, climbing higher and higher to showcase her incredible range and to build excitement. You may come across songs like this that you want to learn. They start in one key and end up in another. Don’t stray from those just because you haven’t learned some sharp and flat chords! You got this!

How Do You Play an E Flat Major Chord on Guitar?

The Eb chord is made up of three notes:

Now that you understand what notes make up the E flat chord, it’s time to play it.

There are many ways to play an Eb major chord on the guitar, but we’ll start by learning how to play a simple version in the eighth position.

You’ll use your index finger to barre the eighth fret and to play the 2nd, 3rd, and 4th strings. In other words:

Once you have your index finger in place, strum 3 strings down from the D (4th) string. Make sure you don’t hit the other three strings or you’ll get a dissonant sound. Here’s an Eb chord chart to help you position your index finger: 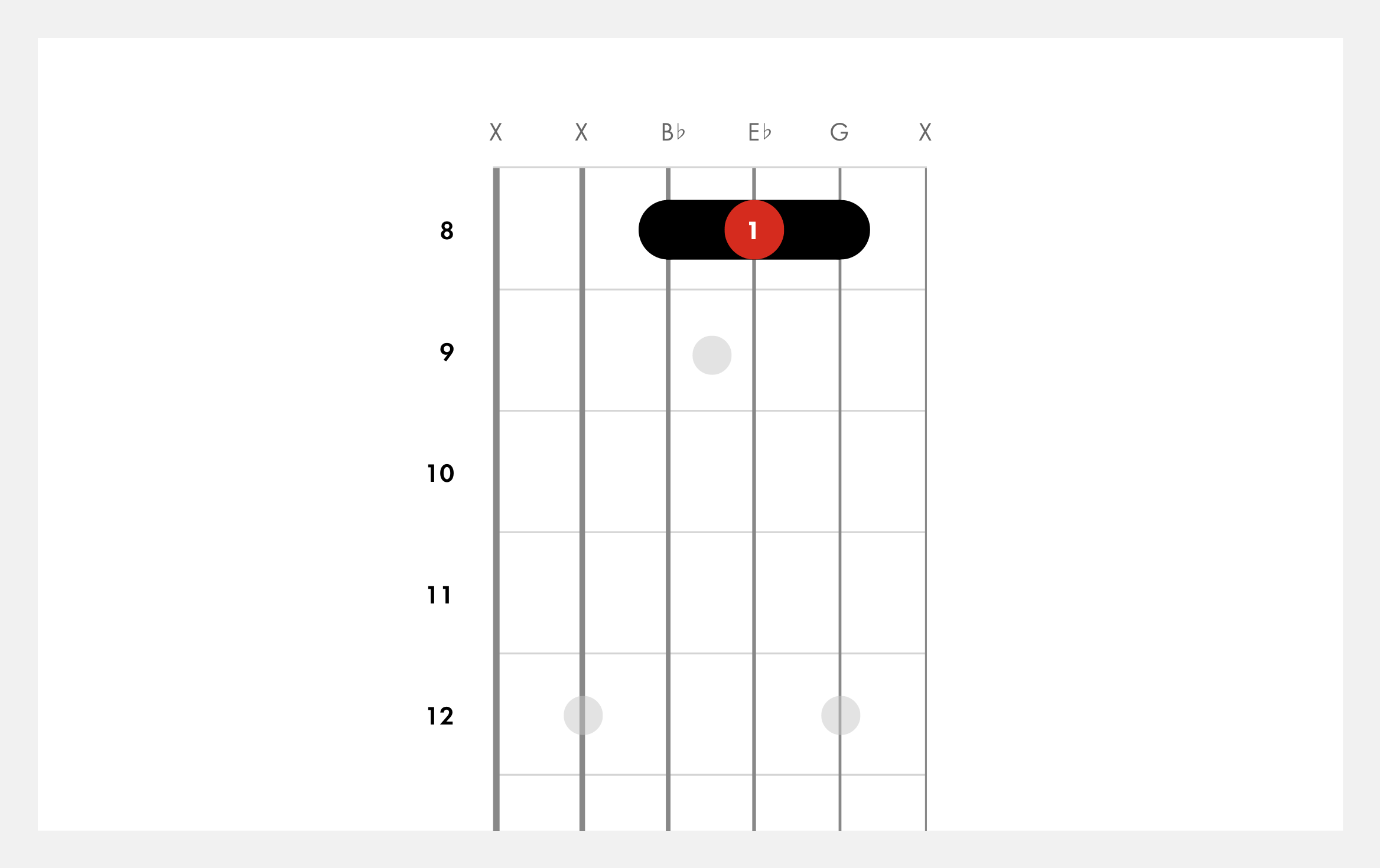 Songs That Use the E Flat Chord

Ready to put your knowledge of the Eb chord to good use? Unlock these song lessons below (and hundreds more!) when you sign up for a free trial of Fender Play.

Get ready to do your best falsetto, because once you learn the Eb chord, you’ll be well on your way to learning “Don't Dream It's Over” by Crowded House. This new wave gem is built upon the Eb chord in a few variations, but you can hear the Eb major in its purest form when Neil Finn hits the high note in the chorus on the word “dream.” Since its release in 1985, multiple artists have covered this song—everyone from Miley Cyrus & Ariana Grande to Sixpence None the Richer to the cast of Glee. Long story short, you’re in good company.

Let’s skip ahead a decade. If you were listening to popular radio in 1997, you couldn’t escape “Fly” by Sugar Ray. The song is composed of three main parts: 1) the instantly-recognizable opening riff 2) the main chord progression that repeats throughout the verses and chorus, and 3) the turnaround in which Mark McGrath holds out the line “I just want to fly.” The E flat chord comes in right there at the turnaround, providing a notable contrast to the rest of the song.

Let’s talk about one more—a crowd favorite. “Gimme Little Sign” by Brenton Wood is a 1967 hit that just makes you want to move. It leverages five chords that are simple to play, one of which is the Eb variation we learned in this lesson. The song is fairly simple and repetitive in the most satisfying way. That simplicity allows you to sink in and get lost in the groove, but it also makes the song accessible to learn for beginners. Master the Eb chord in this lesson and you’ll be one step closer to learning it.

The best way to make progress with the guitar is to make practicing a habit. With each new chord, song, and technique you learn, you’ll get stronger. If you’re feeling good about the Eb chord at this point, try learning Ab or C minor. Both are used in the key of Eb. You can also check out Fender Play’s chord library with dozens of additional free chord lessons like this one.

And if you haven’t yet, sign up for a free trial of Fender Play today. Experienced instructors provide bite-sized lessons so you can learn at your own pace. We truly believe it’s the best way to learn guitar online and to achieve your goals. Give it a try and happy shredding!