How to Play the G Minor Scale on Guitar

Learn the G Minor scale on guitar and get started with exercises to build your skills. Practice the scale positions with diagrams and tabs.

As important as it is to learn major scales on the guitar, it’s equally as important to learn their counterparts -- the minor scales. The G minor scale is perfect for guitarists looking to add emotion and uneasiness to their playing. There are three different minor scale patterns – natural minor scale, the harmonic minor scale, and the melodic minor scale. And just like the popularity of most major scales (G major, for instance), G minor is also frequently incorporated into a number of your favorite songs.

Because the G minor scale has a sense of discontent associated with it, it’s a perfect scale for conveying sadness, grief, and angst in a song. Its versatility makes it an important scale for new guitarists to learn.

In this lesson, we’ll cover the G minor scale. You’ll learn about the notes it contains, as well as finger placements to play it in two different ways. Ready? Let’s get started!

Notes in the G Minor Scale

There are seven notes in the G minor scale:

If you’ve studied the Bb major scale, you’ll notice that it includes the same notes as the G minor scale, but in a different order. Because of this similarity, Bb major is known as the relative major of G minor.

Armed with that bit of musical theory, let’s cover a couple of the various positions and finger placements you’ll need to learn in order to play the G minor scale on the guitar.

One simple way to learn the G minor scale is by using guitar scale diagrams. These diagrams represent the fretboard of your guitar. In the diagrams below, each dot shows you which note you’ll play on a specific fret and string. If you see a dot with a note above the string, play the string in an open position. The yellow dots indicate the root note of the scale. In this case, that root note is G.

We’ll demonstrate the natural G minor scale because the patterns are typically easier for beginners to pick up and remember. 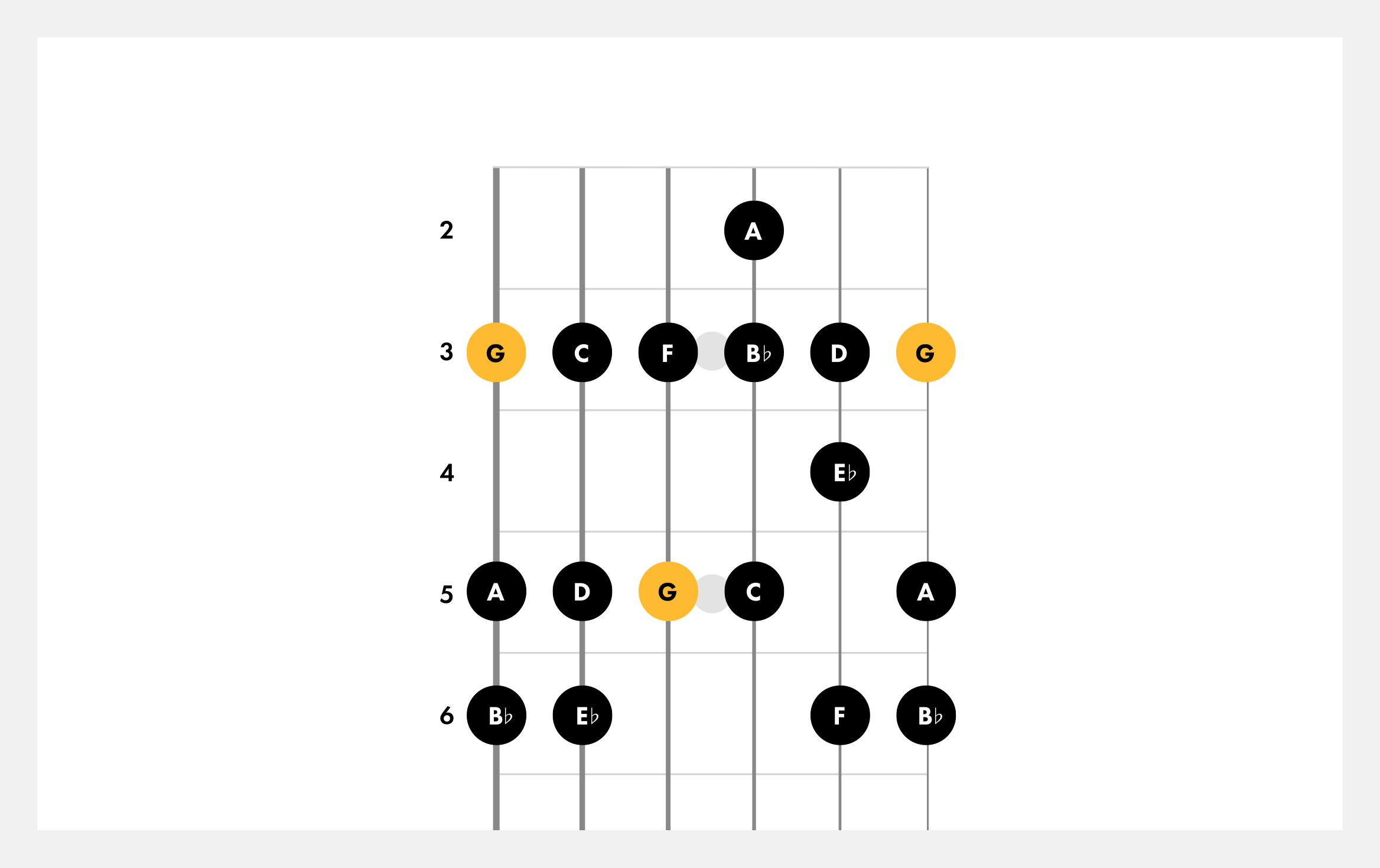 To play the G minor scale in the natural 5th position, begin with your index finger on the 5th fret, your middle finger on the 6th fret, ring finger on the 7th fret, and your pinky on the 8th fret. 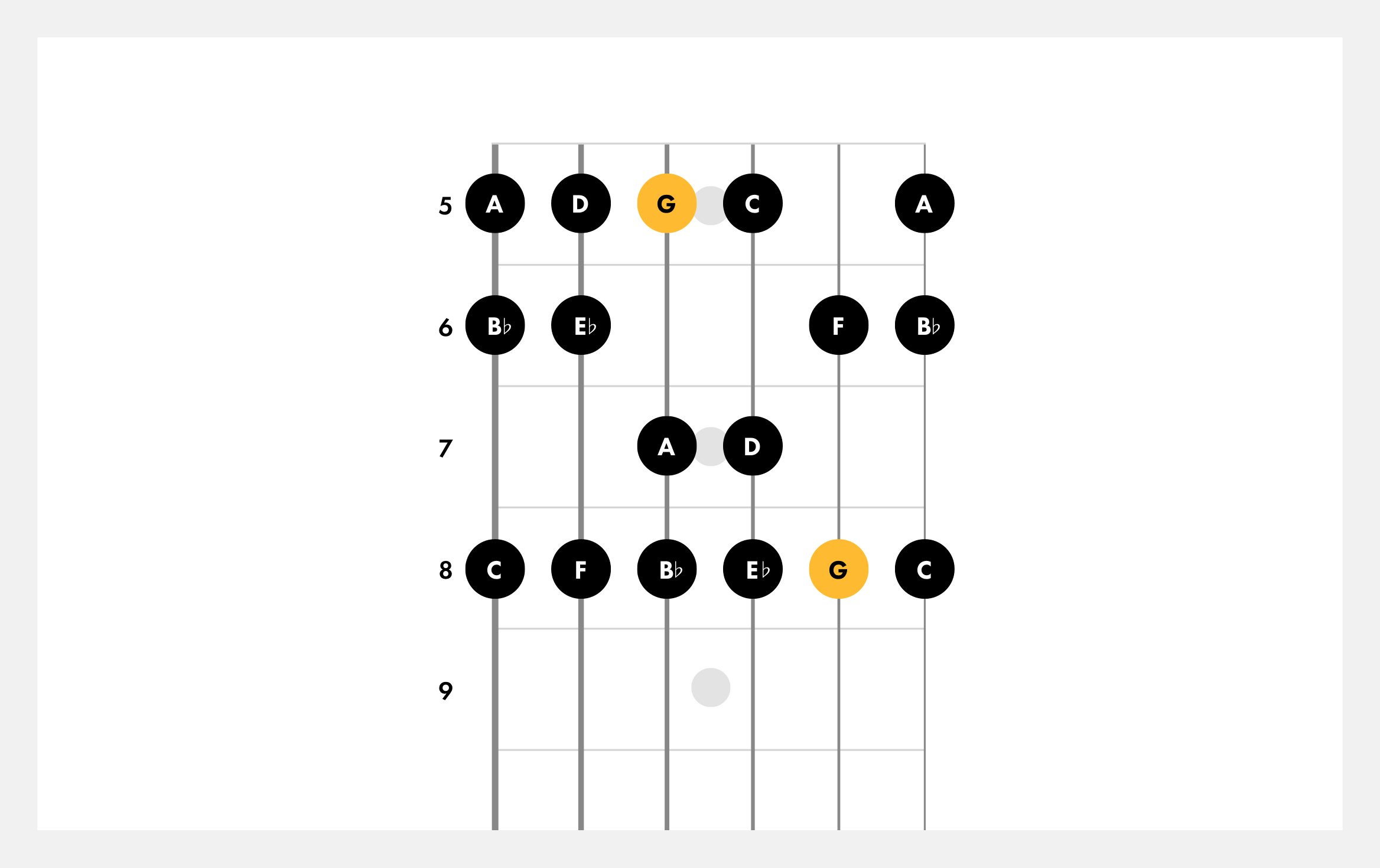 Scale diagrams make for an effective way to learn guitar scales, pitch, and structure. However, they aren’t the only method. Guitar tabs represent scales in a different way. They break up learning scales into more step-by-step directions. Some new guitarists may find it easier to read tabs than learn from diagrams. However, since both forms of notation are common, it’s good to have a full understanding of both so you’re not limited as you continue to learn to play guitar.

Now, let’s take a look at the guitar tabs for each of the pentatonic scales we just studied.

To play the G minor scale in the 3rd position, start with your index finger on the third fret and follow the tab, beginning on the sixth (low E) string.

To play the G minor scale in the 5th position, start with your index finger on the 5th fret of your D string and follow the tab.

Practicing your scales frequently is simply the best way to memorize them. Start slowly, and make sure that you’re cleanly fretting each note, using the correct finger placement. As you build more strength in your fingers, you’ll start to play the scales a little faster and with more confidence. Using a metronome as you practice your scales can also help you focus on keeping time while you play.

You might also like to play the two versions of the G minor scale you’ve learned back to back, along with any additional positions you learn. As you play, listen to the differences in pitch and tone as you pluck the same notes on different spots along the fretboard.

Scales are a great way to build up your picking technique, weaving in skills such as alternate picking to make things interesting. Make practicing your scales a regular part of your learning routine. Expand your knowledge to include more scales, chords, and songs with a free trial of Fender Play.