Learn how to tune your guitar to Drop D and start playing your favorite songs in dropped d tuning.

Drop D tuning is one of the most popular ways to tune your guitar. You can hear it in many popular rock and metal songs. Whether you’re a beginner or a seasoned veteran, Drop D tuning can be incorporated into your arsenal, giving you new and easy ways to play power chords, or lower the tone of a song.

What is Drop D Tuning?

Drop D tuning is one of the easiest alternate tunings to learn. It changes the pitch of just one string, adjusting the tone of your low E string by a full step, taking it down to a D.

Alternate tunings aren’t a new invention. Historically, guitars didn’t always have six strings. Some had five strings, others had four. Several centuries ago, four-string and five-string guitarists tinkered with alternate tunings to give them new ways to play chords and create pleasing harmonies.

Today, a standard guitar has six strings. Yet, the drive to innovate with new sounds and combinations of notes still remains with modern musicians. This is why many guitarists expand their repertoire to include alternate tunings, branching out from standard tuning. 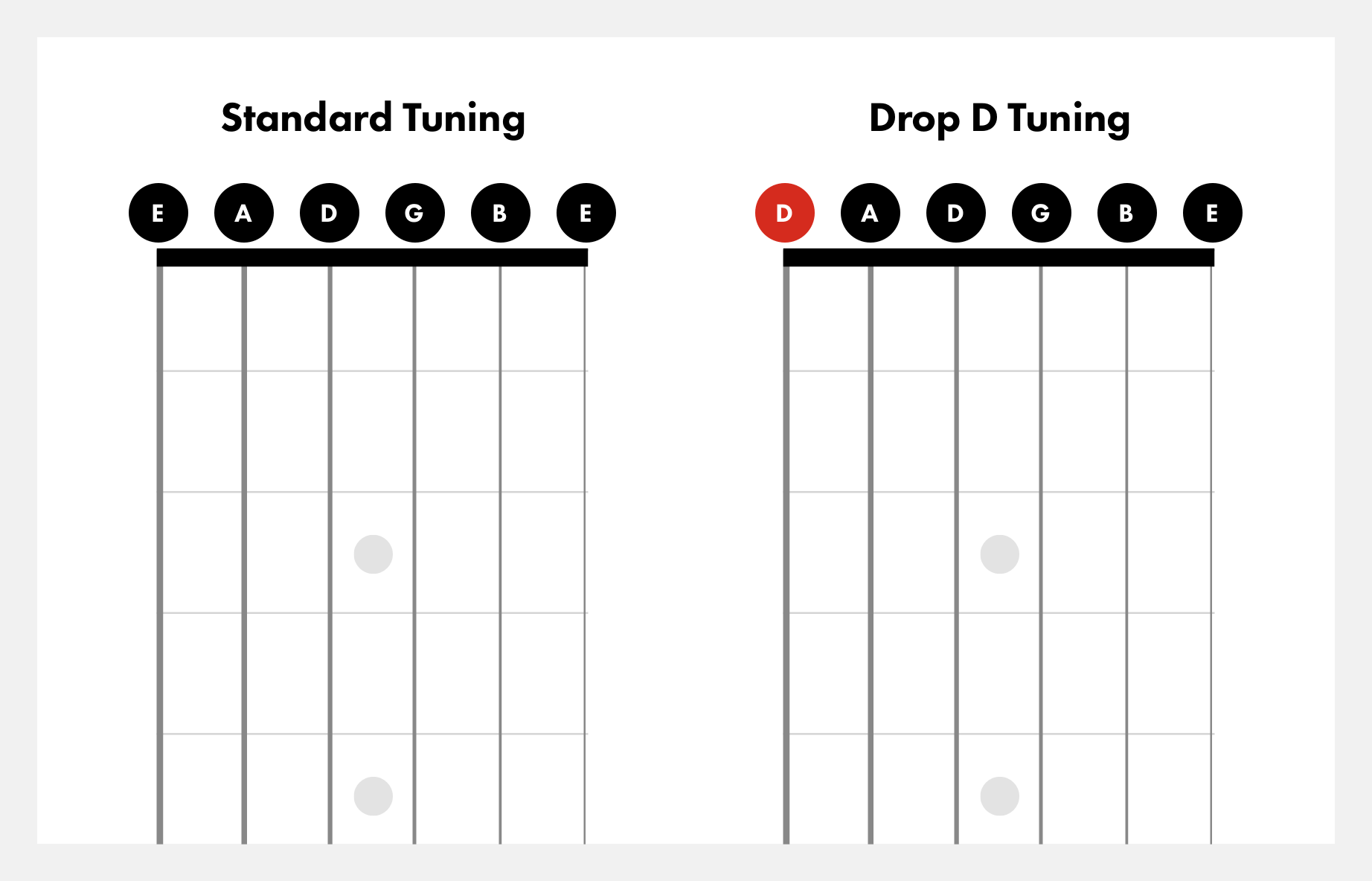 How to Tune to Drop D

Now that you know a little bit about the difference between standard tuning and Drop D tuning, here’s how to tune a guitar to Drop D: Start by plucking your low E string.

If you don’t have access to a tuner to hear the note, you can tune your low E string to Drop D by ear. Simply pluck your D string (4th string) until it matches its tone as you downtune your low E. Your low E will be an octave lower than your D string.

Playing the D chord in standard tuning requires you to use your index, middle, and ring fingers on the three highest-toned strings. You would strum four strings down from the D (4th) string. In Drop D tuning, you would use the same finger shape as you would in standard tuning to play a D chord. However, since your guitar is tuned to Drop D, you can now strum all six strings to play a D chord, giving you a fuller sound.

Drop D tuning lends itself to a multitude of genres, however, it’s most commonly heard in rock and heavy metal. We’ll walk you through a few examples of songs that use Drop D tuning by genre and how it sets the tone for each song.

Nirvana, the band that gave the world the ferocious drumming of Dave Grohl (who later birthed Foo Fighters), the murky bass stylings of Krist Novoselic, and the late, great vocalist/guitarist/songwriter Kurt Cobain, used Drop D tuning on nearly all of their songs. For instance, “All Apologies” gets its murky-yet-intense feel from Drop D tuning. It stands as a shining example of the alternative rock genre’s alternating currents of raw angst and staring into the abyss of depression.

From Nirvana to Foo Fighters, one of the band’s first hits, “Everlong” also uses Drop D tuning, evident in the power chords that drive the tune forward.

Drop D tuning has been a staple of the metal genre - from more mainstream metal like Van Halen in the ‘80s to the British power metal of Judas Priest. More modern metal bands have also embraced this style of tuning.

While Drop D tuning is ideal for finding new -- and sometimes easier -- ways to play power chords and riffs, there are a few drawbacks to playing in Drop D tuning versus standard tuning.

For starters, Drop D tuning may make it more difficult to play certain scales. Standard tuning is made up of fourths, with each string being four notes higher than the one before it. When you drop your low E to a D, it gives you a separation of five notes instead of four, which can throw off your scale pattern.

Additionally, Drop D tuning isn’t suitable for every musical genre. While the lower, more bottom-heavy sound of Drop D tuning lends itself perfectly to aggressive-sounding genres like rock, heavy metal, and punk -- it’s not ideal for brighter-toned genres like pop or folk. The more you learn about different types of genres and the more you experiment with different tunings, you’ll better understand the mood certain tunings, chords, and sharp or flat notes can create.

Diving into alternate tunings can be challenging, but can open up new ways to play chords and set a darker or lighter tone when playing songs. With practice, you can master Drop D tuning, as well as some of its variations, such as Open D tuning or Open A tuning. With practice and patience, you’ll develop both an ear for different tunings and build finger dexterity. Learn more with a free trial with Fender Play.