How to Play the D7 Chord on Ukulele

Add more dimension to your playing with the d7 ukulele chord.

Seventh chords can add more dimension to an aspiring ukulele player’s arsenal. They can be used to add a bluesy touch in a pivotal place in a song -- and the D7 chord is a useful starting point. This article will show you the notes that make up the chord, a few different approaches playing it, and how it fits into some songs.

Lesson: How to Play a D7 Chord

The D major chord is made up of these four notes:

How Do You Play a D7 Chord on a Ukulele?

There are a few different ways to play the D7 chord on ukulele. We’ll walk you through where to place your fingers on the fretboard of your ukulele and which of the four strings you’ll strum to play different versions of the chord, using charts to provide a visual representation for each variation of the chord. For starters, here’s an overview of the four strings and how we’ll reference them:

Unlike the guitar, where strings are arranged in a descending order, the lowest-toned string on a ukulele is actually the third string.

Here’s a key to better understand notations to play the D7 chord on our ukulele chord charts. The diagrams represent your ukulele fretboard, and the numbers or icons used show you your finger positions on each fret or how to play a specific string in a version of a chord:

Perhaps the most basic way to play the D7 chord involves stretching your index finger across the 2nd fret of three strings to form a “barre” chord. Then, using your middle finger, add the 3rd fret on the 1st string. Here are those positions: 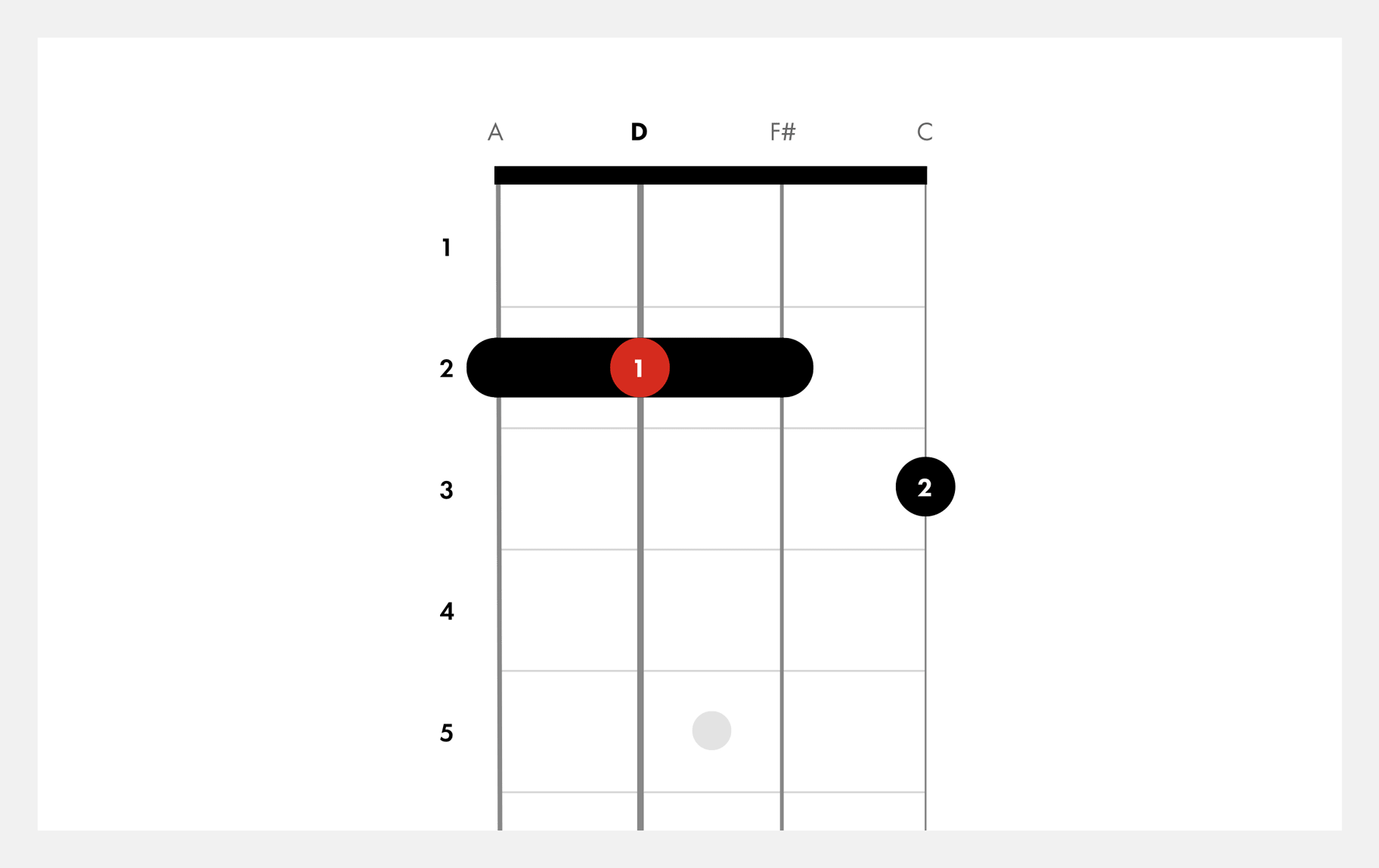 Strum all four strings together, making sure that you’re clamping down firmly enough to barre the 2nd fret so that you hear each individual note. Notice the added 7th serves as the last note at the high end of the chord.

Now, let’s go over a second way to play the chord. This version has a slightly different sound to it. If you have trouble with the chord version above, this position is perhaps a little more basic, as it utilizes two open strings. Here is where you’ll place your fingers: 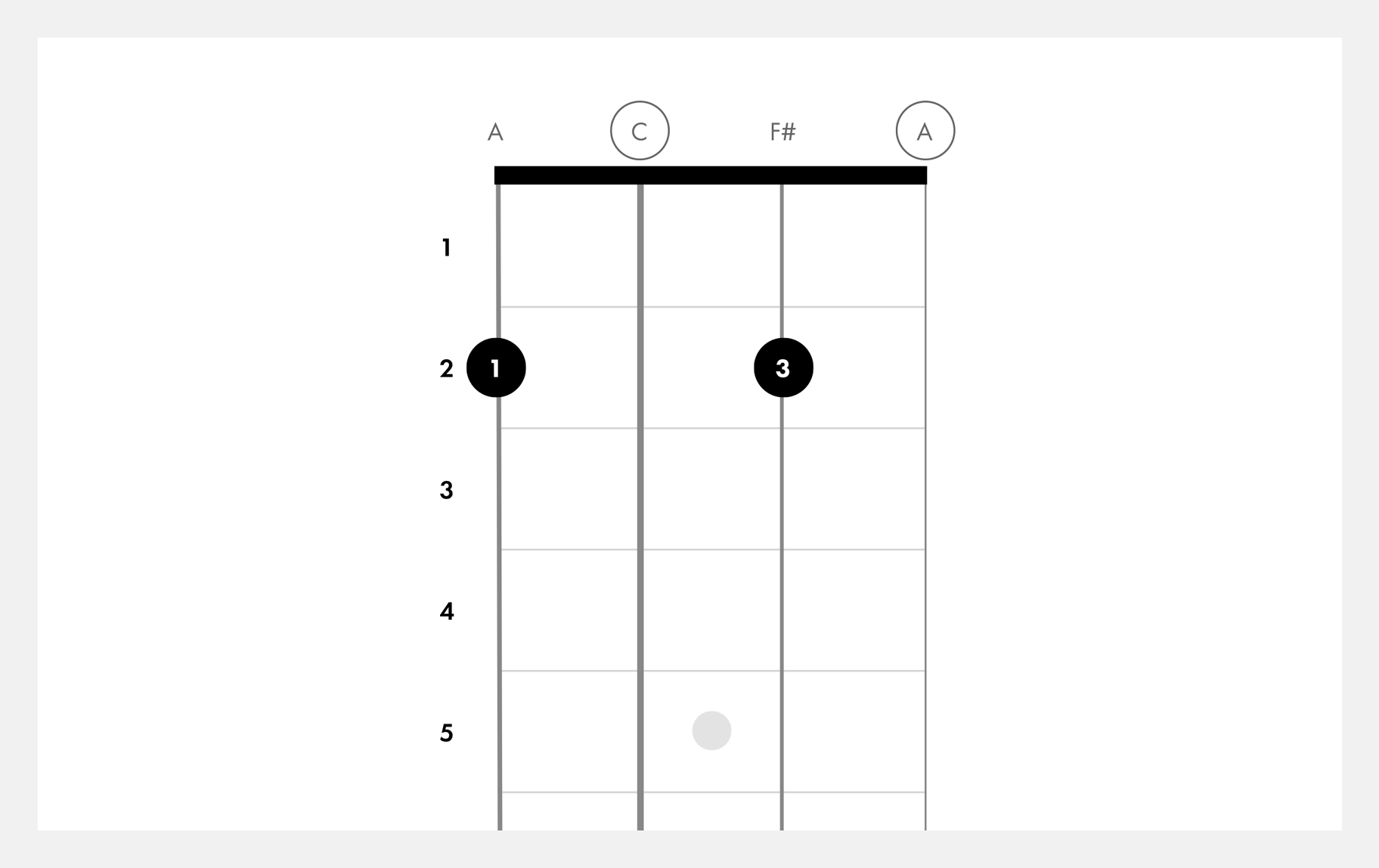 Strum all four strings again, making sure that you arch your fingers to push down on the 2nd fret. This arch will allow space for the open strings to ring freely, so your fingers don’t accidentally touch the open strings and dull their sound. If you aren’t as comfortable using your ring finger on the E string, you could try using your middle finger instead. You’ll probably notice right away how different this variation sounds from the previous version.

Songs That Use the D7 Chord

After you’ve tried playing through these three variations of the D7 chord and feel comfortable with at least one or two of them, it’s important to cement that knowledge by learning how they are actually used. Then you’ll be able to work on transitioning between the D7 and other chords, and hear how they sound within the framework of a song you know.

To begin weaving your knowledge of the D7 chord on a ukulele into a song, let’s start with a rockabilly classic, “That’s All Right.” In 1954, Elvis Presley revitalized the song (originally written by Arthur Crudup) with his uptempo rendition, released as his debut single on Sun Records and catapulting him into stardom. The song’s verses are driven by the A major chord, but the move to the D7 chord represents a notable shift each time it occurs.

For a song that’s a little more challenging and contains a few more chords, let’s look at “The Bare Necessities” from the 1967 Disney film The Jungle Book. The D7 appears in a tricky section of quickly changing chords. Listen to how it sounds, surrounded by a few other 7th chords, like A7, G7, and C7.

Fully mastering the D7 and other chords on ukulele takes time and practice. Spending the time to get familiar with this chord will make it easier to learn others that use similar shapes. Try learning other 7th chords like G7 or C7, then practice transitioning to them from the D7 shapes discussed above. Sign up for a free trial of Fender Play to access more detailed tips for perfecting your technique, learn more chords, and figure out how to play them in songs you love.