How to Play the A Minor Pentatonic Scale on Guitar

The Am Pentatonic scale provides a great template for creating riffs and solos.

Lesson: Playing the A Minor Pentatonic Scale on Guitar

The A minor pentatonic scale is a versatile scale that’s a useful asset for beginners looking to expand their arsenal. In its most basic position, it’s played right in the middle of the fretboard.

The scale is made up of just five notes, but as your fingers move across the fretboard, you’ll repeat these notes in higher or lower octaves. Those five notes are:

These five notes can also be found among the seven notes making up the previously mentioned C major scale. The notes A, C, and E also comprise the A minor triad chord.

The white dots represent open strings, which are played without your finger touching a fret.

Take a look at the diagram below to see the similarities and differences between playing the A minor pentatonic scale in the 5th position versus the 12th position.Then, play it and hear the difference for yourself.

Let’s play the lower octave version of the A minor pentatonic scale, beginning on the low E string (the one closest to you, if you’re looking down at your guitar). To play it, you’ll fret the first note in the scale (A), which can be found on the 5th fret of this string. Place your index finger on the 5th fret -- think of this as your “home base”. Then, you’ll play two notes on each string, moving across the fretboard.

For the stretch from frets 5 to 8, it will be easiest to use the index finger and pinky finger, respectively. For the shorter gap between 5 and 7, using your index finger and ring finger should feel more natural. Now, let’s play it in reverse (descending) order.

Another way to approach the scale would be to start playing it an octave higher than the one before. We’ll still start on the low E string, but instead will use the 12th fret as a starting point. You will hit all the same notes as in the previous example, but this time, the pattern will look a little different.

What if you wanted to take the five notes in the A minor pentatonic scale and expand them into full chords? These chords will be formed by three notes, or triads, which include: a root note (which gives us the letter name), either a major or minor 3rd, and a perfect 5th. Here are the relevant chords, which each contain three of the notes of the A minor pentatonic scale.

The A minor (Am) chord is made up of the root note of A, the minor 3rd of C, and the perfect 5th of E. Learn all about how to play it here.

For the C major chord, the root note is C, the major 3rd is E, and the perfect 5th is G. Here is how to play it.

The D minor (Dm) chord contains the root note of D, the minor 3rd of F, and the perfect 5th of A. Learn how to play Dm here.

For the G major chord, the root note is G, the major 3rd is B, and the perfect 5th is D. Find out how to play it.

To memorize the A minor pentatonic scale, practice playing the scale ascending and descending. Start with the root note of A, then play C, D, E, G, and then a higher A. Use the 5th position pattern to play these notes, then work your way back down the scale, starting with that higher A and climbing back down to G, E, G, C, and the low A.

For an added bonus, try to practice alternate picking when playing the scale. You’ll not only train your ear, but build mechanical skill with fretting and picking the notes in different ways. 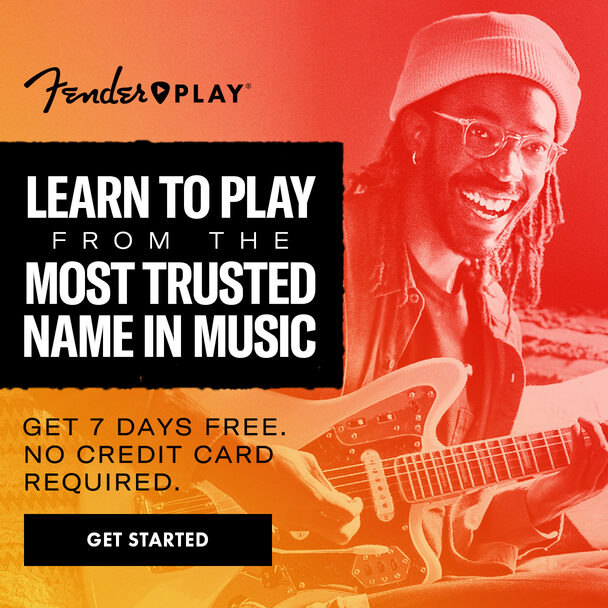