Get the rundown on Fender's offset original. 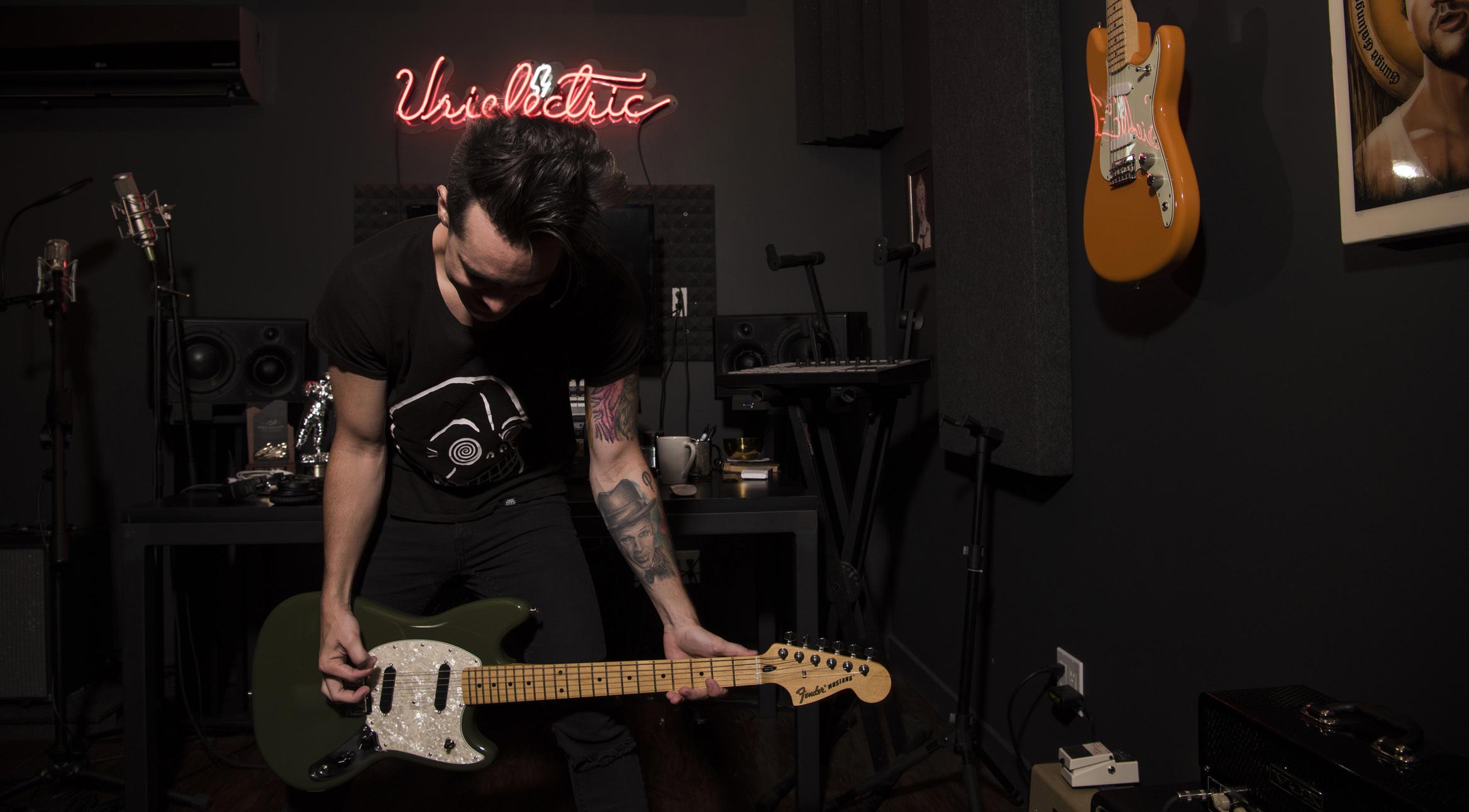 Originally released in 1964, the Mustang was the third in Fender's student series-following the Musicmaster and Duo-Sonic-but the first offset to be featured in the range. By the 1990s, the Mustang had become an indie-rock workhorse and could be found in the hands of grunge gods (Kurt Cobain of Nirvana and Mark Arm of Mudhoney), Britpop superstars (Graham Coxon and Damon Albarn of Blur), shoegaze innovators (Bilinda Butcher of My Bloody Valentine), and noiseniks like Buzz Osborne from the Melvins and Sonic Youth's Thurston Moore and Lee Ranaldo. It's remained relevant as a new crop of players discover its TK sound, like Matthew Healey of the 1975 (see video below) and Brendon Urie of Panic at the Disco (pictured with an Olive Mustang above).

Moderately priced, the original Mustang was a dual-pickup, 22-fret, medium-scale guitar that owed much to the Duo-Sonic, although it had an offset waist like a Jazzmaster and was the first of the student models to feature a vibrato system.

Released in the autumn of 2016, the new Mustang features a 24-inch scale length, a C-shaped maple neck with 22 medium jumbo frets, two single-coil pickups, a master volume, a tone cotrol and a three-way pickup switch. It's available in black, olive and Olympic White.

The Mustang 90 model, which exchanges the single-coil pickups for two, raunchier MP-90 pickups. It's available in silver, Torino Red and Olympic White.

Throughout its long history, the Mustang has been put to good use by scores of notable musicians, including:

Fender was keenly aware in the mid-1950s that there was much to be gained by offering “student” instruments for retailers who offered in-store music instruction. The thinking went that if beginners with beginner guitars stuck with it, dealers who offered lessons were well placed to launch them to the next level by selling them a full-size Fender Telecaster or Stratocaster. Hence the arrival in 1956 of Fender’s first two student guitars, the single-pickup Musicmaster and the two-pickup Duo-Sonic. Both were short-scale guitars (22.5 inches compared to 25.5 inches for the Telecaster and Stratocaster) at the low end of the price list ($119.50 and $149.50 respectively). Fender revamped its student guitar line in 1964 by offering both guitars in both short and medium (24”) scales and by introducing an entirely new guitar that August, the Mustang.

Moderately priced at $189.50, the original Mustang was a dual-pickup, 22-fret, medium-scale guitar that owed much to the Duo-Sonic, although it had an offset waist like a Jazzmaster. A very few 21-fret short-scale models were also built.

The Mustang was the first Fender student model with a vibrato system. Its floating bridge and unusual “Fender Dynamic Vibrato” tailpiece resembled that of the Jazzmaster, although each Mustang bridge saddle had only one string slot (other Fender guitars had bridge saddles with several slots to enable a small range of string spacing adjustments).

The two slanting, single-coil pickups were wired with electronics that were highly unusual for a Fender. First, each pickup had its own adjacent three-position slider switch (in phase on—off—out of phase on), yielding eight different tone settings. Second, it had no pickup selector switch or circuit selector switch. The two slider switches allowed the pickups to be used either in single or in parallel; the second “on” position reversed the phase of the selected pickup, enabling the pickups to be in or out of phase when used in parallel.

It was also possible to modify the wiring to put the pickups as a series in or out of phase without excessive noise. Another option was to install a more conventional pickup selector switch; the Mustang’s body was already routed for this beneath the pickguard (which in such cases would need to be cut accordingly), and the two slider switches could be put to other uses or disregarded. Such electronics changes were common when the model became available and vintage Mustangs are consequently often found with modified pickups and wiring.

Like its Jazz Bass, Bass VI and Jaguar predecessors, the Mustang’s control knobs (one volume, one tone) were mounted on a chrome plate. Other 1964 features included a slab body, single string tree on the small headstock, maple neck with rosewood fingerboard and white dot markers, white tremolo arm tip and Kluson tuners with plastic oval knobs.

The 1965-1966 Mustang changed little, but did get the larger headstock typical of the CBS-acquisition era, an additional patent number on the headstock and “F key” tuners with white plastic knobs that had a more square shape. The Mustang Bass was also introduced in 1966.

The 1967-1968 Mustang shed its “Offset Contour Body” headstock decal and gained a patent number on the tailpiece (previously stamped with “patent pending”). Body and forearm contours were added in 1969, which also marked the first appearance of the three “competition” finishes. These Mustangs had racing stripes on the front of the body around the forearm contour—red with cream stripes, blue with light blue stripes and orange with dark orange stripes. Versions with matching and non-matching headstocks were produced.

Competition Mustangs replaced regular Mustangs around 1970, but were discontinued around 1973. Around this time, regular three-ply white plastic pickguards replaced the pearl white pickguards, and the Mustang became available in Three-Color Sunburst, natural, walnut, black, white and blonde. A second string tree was added in 1974. The tuners had chrome knobs.

Three-ply black pickguards became the norm for Mustangs in 1976, as did black tremolo arm tips and Stratocaster-style control knobs. One-piece maple necks also became an option. The serial number was moved from the neck plate to the headstock in 1977, and Antigua became a color option.

The Mustang was produced until 1982, when it became the last Fender floating-bridge instrument to be discontinued. It would, in 1990, become the first to be reissued, and it became a cult favorite among grunge and alternative guitarists who appreciated its low price and quirky offset look.

The Mustang 90 model exchanges the single-coil pickups for two MP-90 pickups and is available in silver, Torino Red and Olympic White.